Antiques Roadshow is one of the most fascinating shows on television. Yes, you get to hear the interesting stories of old objects, but most people watch for another reason. How will this person react when they are told something they dragged out of the attic is worth big bucks? Or not worth as much as they thought?

Occasionally, it is not the value that is most interesting about an item. On the British Antiques Roadshow, an expert on old glassware drank a liquid from an old bottle—only to later discover it was human urine. The bottle had been turned into a “witch bottle” at some point. Such items were used to keep evil from a house.

So whether you have an attic worth of your great grandfather’s “collectibles” or luck out at an estate or garage sale, you never know what’s going to happen on the show. Here are ten times the experts on the Roadshow uncovered remarkable finds. 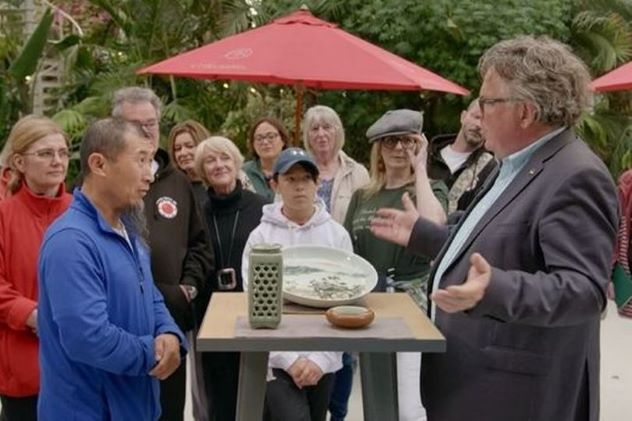 Going to second-hand shops, thrift stores, and charity shops is always exciting because you never know what you might come home with. Plus, there is always the chance that you might stumble on something hugely valuable that was cheap.

One man on the British Antiques Roadshow brought in his small collection of ceramics to find out whether they had any age. Most had been picked up cheaply in charity shops. One, a square vase in pale green with a pierced pattern on the sides, had cost him just £7.99. It was this vase that got the expert most excited because it was an old Chinese design. It was also a technical masterpiece because the vase was actually two vases joined together during production. Having examined the object, the expert was in no doubt. This was a vase dating from the Ming Dynasty.

The owner was stunned. “Ming, really Ming?” he asked. His joyful reaction when told that it was worth between £5000 and £10,000 was one shared by viewers.

Sometimes, it is the simplest-looking objects that have the most astounding stories—and prices to match. This Navajo Ute blanket is finely woven with bands of white, black, and blue. Many people would walk right by it. But these so-called “chief blankets” can raise high prices.

The owner of the blanket seen on Antiques Roadshow had inherited it from his grandmother. As a young child, it was simply put on his bed and occasionally thrown over him on chilly nights. The experts on the Roadshow immediately recognized it for what it was. As an amazing example of Navajo weaving, it was estimated to be worth at least $350,000. The owner was left in tears because his grandparents had merely been poor farmers.

Another example of a blanket like this, which had once been used by a cat to give birth on, sold for $1.5 million. The owner of that blanket had been struggling to get by on $200 a month. So maybe check your attic for one of these.

Diego Rivera was one of the most important Mexican painters of the 20th century. His large murals sparked a new style of artwork. His third wife, Frida Kahlo, may be better known today, but when an article was written about her in 1933, it was headlined “Wife of master mural painter gleefully dabbles in art.” Today their reputations may have reversed, but Rivera’s works are still highly sought after.

One of his early paintings was thought lost for decades. It was only when a man brought it into the Antiques Roadshow that it was recognized and brought back into public awareness. Called “El Albañil,” or “The Laborer,” it was estimated to be worth around $800,000 to $1 million. Not bad for a piece of art that was just hanging up behind a door in a family home.

Walt Whitman was among the most influential poets that America has ever produced. His works were celebrated and vilified in his own time, but his stature has grown. Today, he is now recognized as part of the American literary canon.

What was brought into the Antiques Roadshow was not a rare copy of his literary works but something more personal. During the Civil War, Whitman helped wounded soldiers by taking dictation so that they could send letters back to their families. He apparently wrote many such letters, but few have survived, and even fewer where Whitman signed his name on them.

The letter was brought into the Roadshow not for its own merits but because it was part of a family’s store of Civil War-era items. However, when the experts saw it, they recognized how rare it was. The price put on it was $8,000-$12,000. After later speaking to a specialist on Whitman, the price was revised to maybe as much as $20,000.

There are few moments in American history as famous as the assassination of President Lincoln. Everyone knows how John Wilkes Booth entered the box in Ford’s Theatre, where Lincoln and his wife were watching a performance of Our American Cousin. During a moment when the audience was laughing at a joke, he pulled out a pistol and shot the president. Wilkes then leaped from the box, landed awkwardly on stage, held up a dagger, and proclaimed, “Sic semper tyrannis!”—”Thus ever for tyrants!”

That’s the accepted version of events, but to people in the theatre at the time, it was a moment of confusion. That is why the letter brought into the Antiques Roadshow by one lady was so important. It is a contemporary eyewitness account of the assassination by her grandfather, who was there. He had gone to the theatre after hearing General Grant would be present. Instead, he saw one of the most momentous events of the 19th century.

John and Thomas Seymour were master furniture makers in the late 18th and early 18th century working in Boston. Their “Federal” furniture, made with expensive wood and richly decorated, can be found in museums across the country. This made it all the more unexpected when a table made by the pair was wheeled into the Antiques Roadshow upside down on a cart.

The owner of the table had picked it up at a yard sale for just $25 after haggling the price down from $30. Even then, she might not have purchased the table as her friend thought it was too wobbly to support a lamp. It was also filthy and covered in mold. The demi-lune mahogany card table was more than worth the price she paid and the effort of cleaning it. The experts estimated it might be worth $225,000. Had the owner given it too thorough a cleaning and destroyed the original patina, the price would have plummeted.

When the table was auctioned soon afterward, it sold for $490,000. With the buyer’s premium that is paid to the auction house, this made the final sale price $541,000. 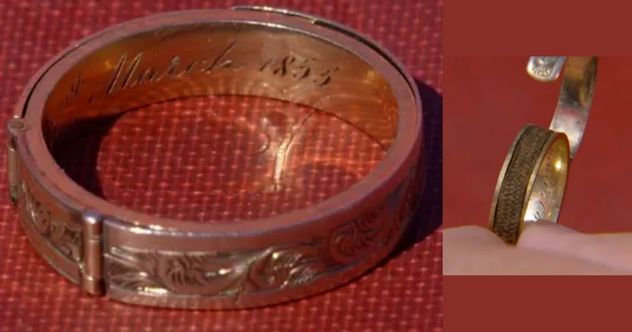 When a woman was rifling around in her attic, she found a grimy old locked box. After searching for the key, she was contacted by a relative who had found it. Once opened, she discovered a small ring inside. The ring was decorated on the outside, but the most remarkable thing was that there was a hinge on the edge. What was inside was even stranger—a braid of what looked like hair.

When taken to the Antiques Roadshow, the puzzle of the ring was uncovered. An inscription inside the ring bore the name Charlotte Brontë and a date—the date of the author’s death. The hair inside? Probably hair belonging to Charlotte Brontë. This would not have been uncommon in the 19th century. Mourning jewelry was often made to commemorate loved ones who had died. Other examples of mourning jewelry made of hair were known to have belonged to the Brontë family.

This ring was valued at around £20,000. Never leave a locked box unopened.

The Chinese market for antiques and antiquities has never been higher. A newly wealthy generation of Chinese investors is spending their money to acquire art and artifacts that have left their country over the centuries. Objects that were once picked up by tourists have suddenly become hugely valuable.

One woman might have been somewhat disappointed when told that a marble lion that she had inherited from her grandparents was not from the Ming Dynasty as she had thought. But she should not have worried. The expert on the Antiques Roadshow realized that the exquisitely carved animal was actually from another golden period in Chinese history—the earlier Tang Dynasty. The expert was so impressed with the statue that he became emotional.

Just like the word “Ming” sets the hearts of antique collectors racing, so does the name Fabergé. The master jeweler of the early 20th century worked extensively with the Russian royal family, including making Easter egg gifts for them. The jewelry expert Geoffrey Munn is famously a fan of Fabergé objects. He once mentioned on an episode that he had been informed that watchers who play a drinking game while Antiques Roadshow is on have to take a shot every time he mentions Fabergé.

Those drinkers must have been very drunk by the time he stopped talking about a delicate spray of blossoms he was shown. These were no ordinary flowers, however. The vase was made of solid rock crystal, the stem of gold, the petals were enamel, and a tiny drop of water on each bloom was a diamond. All were made by Fabergé.

When considering what such an object might be worth, the expert was forced to suggest that it could be worth over £1 million.

Bronze statues can command high prices, but typically, they have to be in mint condition if they are to be truly valuable. When a slightly damaged bronze statue of a bodhisattva turned up on the Antiques Roadshow, it might not have been immediately obvious that it was worth much at all. The experts in Asian art, however, got very excited—even though it had lost one arm.

The owner of the piece had been shopping in an estate sale when she spotted it. Several antique dealers had already snapped up many of the best objects, but this statue had been ignored. The owner was able to buy it for around $100. The experts agreed she had got a bargain. They dated it to the early 15th century and suggested a retail estimate of $100,000-$150,000. It turned out they were wrong… on both counts.

When the statue was later auctioned, it was described as coming from the earlier Tang Dynasty. It eventually sold for $2 million at Sotheby’s.