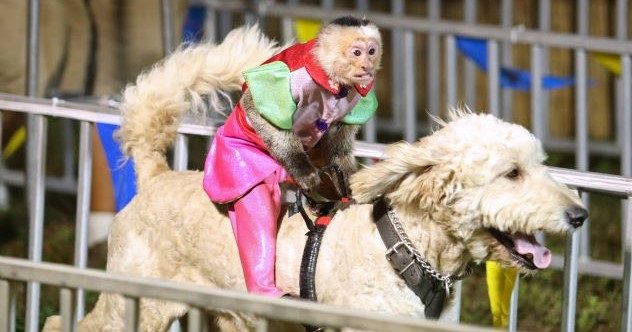 Humans are competitive animals. They love to win. Those who can, race; those who can’t, train animals to take part in contests for them. It is impossible to say when the first races involving animals were held, but it is likely that it was deep in the past. Chances were that something was wagered on the outcome too.

Today you can gamble on the outcome of a bewildering variety of animal races. Here are ten of the whackiest races around.

One of the highlights of the British sporting year is the annual Oxford and Cambridge boat race. The fight between the two ancient universities of England was first run in 1829 on the Thames, and nearly a quarter of a million people cheered on the boats from the banks. Less well-known—but just as thrilling—is the Oxford Cambridge Goat Race.

Taking place each year at Spitalfields City Farm, you can watch two goats go head to head for the honor of their university. One is dressed in the majestic blue of Oxford while the other is resplendent in the slightly different blue of Cambridge. Because goats are not the most biddable of animals, the two are lured along the track by a person carrying a bucket of food.

Interestingly, the Oxford and Cambridge race is not the only goat race. In Tobago, you can watch multiple goats trotting in competition on the Tuesday after Easter. The race was first held on the streets but has since been relocated to a $100 million sporting arena.[1]

Aesop was one of the great storytellers of antiquity—if he really existed. The collection of short fables that have come down to us under his name contains some of the most famous stories in the world. The Boy Who Cried Wolf, the Sour Grapes, and the Town and Country Mice are stories most children hear and have no trouble understanding their morals. The same is true of the Tortoise and the Hare—slow and steady wins the race.

But some people cannot just enjoy a good story. Some have decided to restage the race between the slow tortoise and the swift hare. Several videos can be found online that show these competitions. Oddly, it seems that Aesop got it right. In most of the real races, the tortoise manages to slowly shuffle to victory at the finishing line while the rabbit loses interest and simply stops to eat the grass.[2]

Ostriches are capable of reaching speeds of 45 mph (70 kph). They are also the tallest and heaviest of all living birds and can give a very nasty kick when threatened. This makes ostrich racing all the more bizarre. Not content with having the birds race against each other, in ostrich racing, the birds have jockeys on their back.

In the old days, the ostriches were harnessed to small carriages that pulled the driver. Today the jockeys cling to the back of the birds as best they can. They only have the feathers to grab hold of, which probably does not make the ostriches very happy. Many of the jockeys do not make it to the end of the track.[3]

If you get annoyed that you can’t eat the animals at the end of their race, then there is a sport in Australia that might just be right for you. Yabbies are crayfish native to Australia and are delicious boiled or barbecued. They also make for entertaining races.

In each race, ten yabbies are placed in the middle of a ring marked on the ground. To differentiate between them, they are marked with numbers painted on them with white-out. The contest ends when the winner places its claw outside the ring.

The bets placed on the match take the form of an auction. Bidders call out the number and price they’re willing to pay. All the money raised goes into a pot (as the losers may also be placed later), and the owner of the winning yabby claims all the cash.[4]

Sometimes the most entertaining games come out of boredom. One day in Bali, farmers were bringing in the rice harvest with their buffalo when they decided to make it a race. That is how Makepung was born.

Two bull buffalo are harnessed to a cart that a rider stands on as they hurtle along a track. The buffalo are dressed for the occasion with painted horns and fancy necklaces and garlands. The race may not be entirely pleasant for them, however—to get the buffalo to reach full speed, the drivers twist their tails and lash their backs with a whip.

There is a prize of sorts for the victors. Those bulls who win can be sold for high prices and spend the rest of their lives as a stud fathering other racing bulls.[5]

Thoroughbred horses used in standard races are sleekly muscled and have glistening coats. But looks aren’t everything. There are horse races in Japan that test both the speed and strength of the horse. Ban’ei are races that see draft horses dragging heavy sleds over a track filled with ups and downs. A jockey stands behind them and drives them on. These sleds can weigh up to a ton.

The races began as an outgrowth of agriculture, with horses being raced as they pulled in harvests or moved equipment. Because of the weight of the sled, the races sometimes include a pause after the first slope to allow the horses time to recover before facing the second incline.

The sport has nearly died out, but the popularity of gambling on the events has seen it make something of a comeback.[6]

Cane toads are a pest in Australia. They were originally introduced to Australia from America in an effort to control the cane beetle, which was attacking sugarcane crops. It turned out, however, that the cure was worse than the disease. Soon, the cane toad population exploded and severely damaged the natural ecosystem. Now the toads number in the hundreds of millions, and the cane beetle has hardly been dented.

Attempts are being made to eradicate the toads but with only limited success. Some are trying to find uses for the toads, such as blending them into fertilizer or making leather from their skin. Others are turning them into a sport.

Cane toad racing sees the toads prettied up with ribbons to mark them and placed at the center of a ring. They are then released, and the first to escape the ring is the victor. Like in yabby racing, the toads are bought in an auction, and the winning owner gets some of the total money raised. Some of the prize pot is given to charity—often a charity aiming to get rid of the cane toads.[7]

Races are usually high-paced and adrenalin-fuelled spectacles. Snail racing is a little more relaxed affair. The race is one of the few animal competitions that can be held on a tabletop, so it can be played almost anywhere by anyone.

Usually, the common garden snail native to Europe is used. Once again, it can be tricky to spot the difference between the competitors. Racing snails are usually painted with colors to help identify the race participants. They are then placed in the center of a ring around 12 inches in diameter, and the winner is the first to cross the edge.

The longest-running snail race takes place in Congham, England. To give an idea of the speeds involved in snail racing, you should know that the fastest ever winner clocked in with a completion time of two minutes.[8]

Ever wanted to see a horse race but thought the horses were just too big? Welcome to the fun-sized world of Shetland pony races. Shetland ponies are tough little horses that were bred to pull small carts. For years they were used in mines because they would not block the shaft. Today, most Shetland ponies are kept as pets though some are used instead of guide dogs.

For Shetland pony racing, both the horses and jockeys are smaller than usual. The riders are usually children because putting an adult on a Shetland pony would probably just result in a collapsed pony. Children can be riders until they reach 5 feet (1.5 meters) in height.

In a list of animal races, it is perhaps unfair to include events where humans are involved at all. To make up for it, here is an event that includes not one species but two. Greyhounds are a common racing animal—but putting monkeys on their back to act as jockeys is not so common.

The events started in the 1920s in Australia and caught on in the 1930s in the United States. The monkeys were strapped to the back of the greyhounds wearing tiny silks that looked exactly like those used by human jockeys. In 1933, a patent was applied for that covered the design of a miniature saddle and harness for monkey riders.

The fad for monkey jockeys did not last long. Many people considered the sport to be cruel to both the monkeys and the greyhounds involved. Today, it can only be seen in grainy footage from the time.[10]