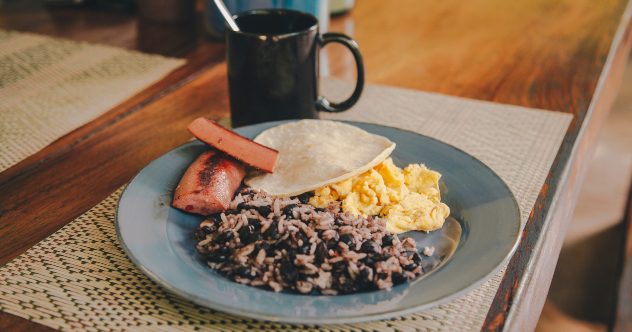 If breakfast is the most important meal of the day, it’s no surprise that chiefs worldwide have also conspired to make it the tastiest. Some breakfast foods are so popular that they can be found just about anywhere, while others still are some countries’ best-kept secrets.

From pastries and eggs to waffles, sausages, and everything in between, the sheer number of worldly day-starters is equal only to the countless people eager to eat them. So if your stomach is ready to begin its multi-continental journey, here are ten breakfast foods from around the world you need to try.

Related: 10 Food Inventions That Changed The Way We Eat Breakfast

Made with ground maize meal or flour, these flat, round patties are the versatile centerpiece to many Venezuelan meals—including breakfast! Arepas can be prepared in many ways, such as on a grill, baked in an oven, fried, boiled, or steamed.

Depending on the region, an arepa will vary in color, flavor, and size but also what delicious combination of ingredients are stuffed inside. Avocados, chicken, eggs, and savory Venezuelan white cheese are only a handful of the favorite breakfast fillings. For an even heartier breakfast, try also adding beans, salad, or assorted meats.

With more than 70 distinct forms of preparation in the neighboring country of Colombia, it’s easy to see—and easier to taste—why the arepa has been a culinary staple in the northern region of South America for thousands of years.

Silog is a Filipino breakfast dish made from fried eggs and sinangag (fried rice). Originally referred to as tapsilog, which included sinangag and beef tapa, silog eventually became so popular that the once late-night hangover food found its way onto the breakfast menus of restaurants and fast-food chains.

All types of silog feature the dish’s main ingredient of garlic-fried rice, often accompanied by a fried egg. After that, though, the number of variations on this incredibly malleable breakfast is something to feast your eyes on.

Hailing from the Izmir province of Turkey, menemen is a traditional, tomato-based Turkish spread that will spice up your mornings. Menemen is a mixture of finely diced or grated tomatoes with sauteed green chili peppers and beaten eggs topped with spices like ground black and red pepper, oregano, and garlic. You’ll typically find menemen served in metal pans alongside a big basket of bread at a restaurant. The spread is scooped up with the bread directly, allowing you to forget about the silverware.

When served for breakfast or brunch, most chefs will often forgo the addition of onions, which is a common ingredient on lunch or dinner menus. Beware, though, because many menemen lovers will argue vehemently on the vegetable’s behalf. Other takes on menemen bring cheese, spinach, and sausage pieces into the mix. Needless to say, this is one spread that won’t make you regret leaving your bed.

Since the days of ancient Egypt, ful medames have been satisfying that morning hunger of man and pharaoh alike. The simple yet timeless recipe includes slowly stewed fava beans and chickpeas spiced with lemon juice, parsley, cumin, chili pepper, and onion. Hard-boiled eggs are a popular addition, along with a piece of pita bread and diced vegetables.

When prepared and served traditionally, ful medames will arrive in the same large metal jug it was made in. A favorite in Africa and the Middle East, as well as being recognized as a national dish of Egypt, ful medames has been adapted into many a reincarnation.

Some regions prepare it similar to a hummus dip with the additions of tahini, tomato, olive oil, and green peppers, while others opt for split green peas, Aleppo pepper sauce, or an even spicier mixture featuring coriander, peppercorn, and saffron. I guess there’s a reason why traces of the dish have been discovered in ancient tombs…

If regular old pancakes just aren’t cutting it for you anymore, then it may be time to ask Mother Russia for her go-to syrniki recipe. Derived from the Slavic word syr, meaning “soft curd cheese,” syrniki are hand-sized girdle cakes stuffed with a type of soft, mild farmer’s cheese known as quark. The batter is made from eggs, flour, and sugar, sometimes mixed with vanilla extract before both sides are browned evenly on a griddle, maintaining a slightly creamy consistency.

Raisins, chopped dried apricot, apples, and pears can be added to the batter, while more savory versions call for adding onions or sour cream. When plated, it’s not uncommon to find syrniki paired with a side of fresh berries, honey, or jam. One taste of this Eastern European favorite, and you’ll have a new whole word for pancakes: syrniki!

Gallo pinto is a hot breakfast dish served for generations in the Central American countries of Costa Rica and Nicaragua. Starting with a hearty base of beans and rice, gallo pinto is often colored with cooked bell peppers, coriander, chopped onions, and garlic. The Costa Rican condiment salsa Lizano—a light brown sauce similar to HP sauce or Worcestershire sauce—is another flavoring popular among locals.

Several regional variations of gallo pinto define the dish throughout Costa Rica and Nicaragua. Valle central is a moister, less greasy variation that uses black beans, cilantro, and chili seasoning. Guanacaste, meanwhile, is fattier and prefers the red beans that are popular in Nicaraguan recipes.

Gallo pinto translates to “spotted rooster” in Spanish for the dish’s black and red beans giving it a multi-colored, speckled appearance. Although, if you ask me, the sound and smell of this dish cooking in the morning might just put that rooster and its crack-of-dawn crow straight out of a job.

Thinking of shaking your mornings up? Try shakshuka! Deriving from the Arabic term for “mixture,” shakshuka is an inexpensive, easy-to-make hot dish fit for any meal of the day. This filling meal consists of a spicy tomato sauce made with olive oil, peppers, onions, and garlic and spiced using cumin, paprika, and cayenne pepper. The whole thing is then topped with lightly poached or hard-cooked eggs cracked right over the mixture until the yolks have firmed.

Various types of bread commonly accompany shakshuka to sop up every last drop of the delicious sauce. Recommended bread includes the likes of pita, homemade flatbread, rustic crusty bread slices, challah, and crispy latkes. The best part about shakshuka? If you can’t finish it all in the morning, then your pasta sauce for dinner is already ready to go!

Although the origins of this fried-dough favorite are as knotted as its shape, churros—churros con chocolate, to be precise—is a beloved breakfast dish straight out of Spain. By pairing the crisp, cinnamon sugar-sprinkled churros pastry with a steaming cup of hot chocolate, churros con chocolate is an unparalleled marriage of food and drink.

Whether you’re a sipper, dipper, or straight-up dunker, there are even more chocolatey choices to combine with your churros. Champurrado is a thicker beverage, while dulce de leche is caramelized milk with a sauce-like consistency, and café con leche is a strong coffee mixed with scalded milk.

Churros con chocolate is a particular favorite of the Spanish city Madrid, which has led to the creation of regional variants both inside the city and out. Porras is a more savory version of the traditional churro thanks to its shorter, chunkier stature and melted cheese filling. On the other hand, tejeringo is a thinner, more circular type of churro native to the Spanish province of Grenada. However you churro, just make sure you don’t forget the chocolate!

Ever wanted an enchilada for breakfast? Well, with chilaquiles—a popular breakfast dish out of Mexico—now you can! Corn tortillas are typically cut into quarters before they’re lightly fried or baked. After that, the tortillas are softened by pouring either green or red salsa over them, then adding shredded chicken, cheese, sliced onions, and eggs, either scrambled or fried. It’s not uncommon to find chilaquiles garnished with crema, crumbled queso fresco, or avocado slices. And to really fill a hole, side servings of refried beans and guacamole go great as side dishes.

The secret to telling the various versions of chilaquiles apart is all in the sauce. Some take on chilaquiles using the tomato and chili base of rojos, while others favor the jalapeno, lime, and cilantro combination of verdes. Whether it’s red or green, there’s no wrong choice. After all, “chilaquiles” derives from “chīlāquilitl,” a Nahuatl term roughly translating to “chiles and greens.”

Belgian waffles may share some similarities with their American cousins, but there are more than enough reasons why you shouldn’t waffle on this rendition of a breakfast icon. Boasting larger squares and better pockets, Belgian waffles are made for holding a variety of scrumptious toppings such as whipped cream, fresh fruit, melted butter, and, of course, maple syrup!

The batter is made from brioche dough, and so—when combined with pearl sugar—gives Belgian waffles a light texture and subtle crunch that will be as recognizable to your ears as your tongue. But don’t forget about your hands, as, unlike American waffles, Belgian waffles are traditionally eaten with all ten digits. So, as long as you aren’t afraid to get your fingers a bit sticky, morning munchers can’t go wrong with this incredible take on a breakfast table classic.

10 Most Haunted Malls in the World