We’ve all had nights where we just prefer to stay in and have our favorite pizzas delivered straight to our front door, but this can be a pretty dangerous job for the pizza delivery driver. In 2014, at least 20 pizza delivery drivers were shot at in America, and the occupation is often referred to as one of the more dangerous jobs in the U.S. According to the Bureau of Labor Statistics, 334 delivery drivers (transporting food and goods) lost their lives from 2015 to 2019. While most fatalities resulted from transportation accidents, almost 17% occurred due to intentional injuries in an assault, robbery, or homicide. Yikes!

In 2019, 30-year-old Bobby Jenkins was murdered while delivering a pizza for Stacy’s Pizza in Philadelphia. Authorities believe Jenkins was lured to the location as a trap because the delivery location was a vacant home still under construction. The suspects entered the vacant home through the back door and were armed while waiting for Jenkins to arrive.

He was found murdered at the vacant home after being shot in the chest, and he had been robbed of several unidentified items. Another pizza delivery driver in the same area was robbed just days before Jenkins, but the other driver was not injured. Jenkins was working as a pizza delivery driver to earn extra money to open his own business.[1]

Seven years ago, Khaled Heeba and his family fled the war in Syria to Egypt, but they arrived in America about three years ago. He was working at Vizzini’s Pizza in Baltimore when he was murdered while delivering pizzas in February 2020. Khaled was on his delivery route when he witnessed a disturbing situation. He quickly jumped out of his car and chased after the man causing the disturbance, but the man pulled out a gun and killed him instantly.

The shooting happened just before his Friday prayer and was only blocks away from his work and home. His family described him as a hard-working man full of compassion, but his big heart ultimately cost him his life. To make matters worse for his family, Khaled’s brother in Germany was unable to be with the family during this time due to the travel ban affecting Syrians.[2]

Stephanie Brainerd was delivering a pizza at Chesapeake’s Marina Point when she was murdered in her car. Her murder was found to be part of a setup after authorities realized that the apartment she was delivering to was vacant. A police officer in the area heard the gunshots and saw the suspects speed off in a black SUV. The officer pursued the fleeing vehicle, but one suspect jumped from the moving vehicle. The officer continued to pursue the vehicle and arrested the two other suspects.

Nineteen-year-old Tonagee Ravenel, 18-year-old Antonio Britton, and 20-year-old Semiya Davidson were charged with conspiracy to commit a robbery, robbery, and use of a firearm in the commission of a felony. The three suspects were later also charged with first-degree murder.[3]

Nineteen-year-old Alberto Vanmeter attempted to rob Domino’s delivery driver Joshua Ungersma on August 31, 2020, but Ungersma shot and killed the teenager. A man heard the gunshots outside his home and ran out to help the Lafayette, Louisiana, delivery driver. The man and his roommate called the police, but it would be too late for Ungersma.

Right after the authorities had been notified, 17-year-old Jaelynn Billups walked from across the street and shot Ungersma, killing him in the street. She was with Vanmeter and was arrested at the scene and charged with Ungersma’s murder. Billups was also charged with conspiracy to commit armed robbery after authorities realized she had the pizza delivered to a vacant location. She also faces murder charges of Vanmeter because anyone who is killed in the commission of a felony can be charged with that person’s death too.[4]

David Shelton, 30 years old of Portage, Indiana, was a delivery driver for Luigi’s Pizza when he was shot and killed in 2019. He was the second delivery man to be shot and killed in Glen Park within a month. Shelton was shot while in the process of being robbed by the suspects. Two Gary men, Terryante Flournay and Ciontay Wright, were arrested and charged with attempted robbery, conspiracy to attempt robbery, and murder. Flournay was also indicted for possessing a firearm as a convicted felon.

One of the numbers used to call Luigi’s Pizza was traced back to Flournay’s mother. Flournay and his mother were both questioned by authorities, and his mother told them she was tipped off about the murder through social media. During questioning, he yelled at his mother, saying, “You don’t have to answer that,” and “Don’t snitch on me.” The questioning also led to the arrest of Wright and his girlfriend. His girlfriend first claimed to be at work during the murder but later admitted to knowing about the robbery being set up.[5]

In 2014, 49-year-old John Sullivan was working as a pizza delivery driver on the west side of Indianapolis. While on a delivery route, Sullivan was beaten to death by Derek Romano and Jeremiah Roberts. After killing him, they stole his car and drove to Wyoming, where they were eventually arrested. Sullivan’s body was found the next day in the basement of where Romano and Roberts had been living.

The two men were charged with murder and sent to Wabash Valley Correctional Facility. Six years after the murder of Sullivan, Romano murdered his partner in crime in prison. Roberts was found unresponsive in his cell and was pronounced dead before arriving at the hospital.[6]

Richel Nova was murdered in September 2010 while delivering pizzas in Boston. Nova was lured to a vacant home where he was stabbed 16 times, and the suspects stole two pizzas, chicken wings, and a bottle of soda, along with about $140 in cash that he was carrying. Nova was a father of four, and he worked as a pizza delivery man to help pay for his children’s education.

Alexander Gallett and Michel St. Jean were charged with murder and sentenced to life in prison without parole. Gallett’s girlfriend, Yamiley Mathurin, was also sentenced to at least 17 years in prison after pleading guilty to manslaughter. She will also serve three years’ probation after her sentence for armed robbery.[7]

Najeh Masaeid was a 63-year-old grandfather who delivered pizza for Dominos in the Birmingham, Alabama, area. In December 2014, He was delivering pizza to the District at the Summit apartments when he was found dead in a hallway. Masaeid had been working for the pizza chain for 15 years.

A week after Masaeid was found dead, 17-year-old Corey Arrington was arrested and charged with murder. Authorities believed robbery was the motive behind the murder, but Masaeid’s co-workers said he probably only had about $20 with him at the time of the murder. Arrington was also charged with robbery for a previous incident at the same apartment complex.[8] 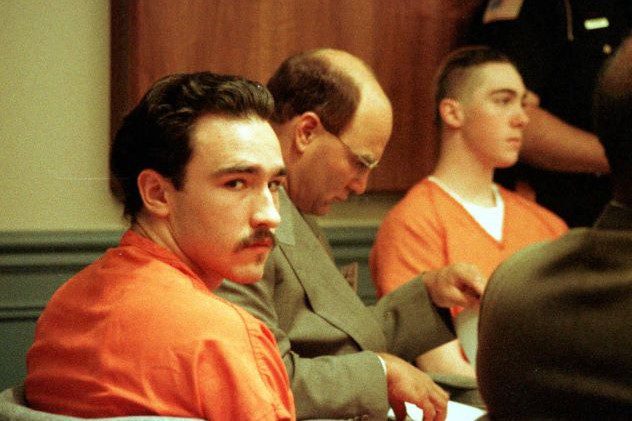 In 1997, Giorgio Gallara and Jeremy Giordano were murdered while delivering a couple of cheese pizzas to a vacant New Jersey home. They both worked for Tony’s Pizza when the two were lured to the location to be shot and robbed.

The two suspects, Thomas Koskovich and Jayson Vreeland, had previously robbed an outdoor sports store where they stole several weapons. They fled to an abandoned home where they ordered the pizzas to lure their victims. This is where they killed Gallara and Giordano just to see what it would feel like to kill someone, which is why the murders are referred to as the “Thrill Killings.” Koskovich and Vreeland were arrested the next day and charged with murder.[9]

The death of Brian Wells was part of a complex plot that included a bank robbery, a scavenger hunt, and a homemade explosive device. Wells was a pizza delivery driver for Mama Mia’s Pizzeria in Erie, Pennsylvania. It is believed that he was a knowing participant in the bank robbery, but he most likely did not know that he was going to die as a part of it.

Wells delivered two pizzas to the address of a transmitting tower of a local TV station. A collar bomb was placed around his neck at the location, but authorities are unsure if he knew the bomb was real. He was then instructed to enter a PNC Bank with a note demanding $250,000 as part of a nine-page treasure hunt given to him. The hunt would lead to keys that would delay detonation and ultimately defuse the bomb. About 15 minutes after leaving the bank with much less than he demanded, the police arrested him and left him sitting on the ground in a parking lot. Before the bomb squad could arrive on the scene, the bomb detonated and created a hole in Wells’s chest, killing him.[10]

Ten of the Most Bizarre Crimes of 2022