10 Common Myths and Misconceptions About Our Universe 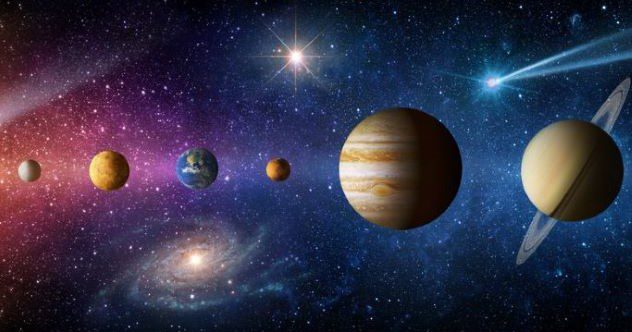 Almost everyone has looked into the night sky and marveled at the vastness of space, pondering the mysteries of that final frontier. But movies, TV shows, and books have led to some warped assumptions about the universe around us. So let’s use science to clarify that erroneous thinking and address ten of the more common myths and misconceptions about our universe.

Related: 10 Oddest Stars We Have Discovered

The light from a distant or dying sun takes a long time to reach us on Earth. Therefore, many of the 6,000 stars we see at night must be dead, burned out, and no longer emitting any light. Right?

Well, not really. Those 6,000 visible stars are likely all still burning bright and doing just fine. The stars we can see from Earth are all less than 1,000 light years from us, which is actually pretty close for stars. So it’s highly unlikely that any star we see has died in the time it takes for its light (traveling at 186,000 miles/second or 300,000 km/second) to reach us.[1]

9 The Universe Is Infinite

The universe is big—there’s no doubt about that—but it actually is finite. It does have an end.

Our galaxy alone, the Milky Way, has over 200 billion stars. And there are an estimated two trillion galaxies in the universe. But it’s still measurable. The outer edges of the universe are 47 billion light years away from us in every direction—that’s the radius. And the distance across (the diameter) from end to end is 94 billion light years.

A more mind-boggling consideration is: what lies beyond those planets and stars on the outer edge of the universe?[2]

Unlike what we’ve seen in films, black holes are not menacing cosmic tornadoes, sucking up everything in their galactic path. Nor do black holes hunt for planets to consume in order to survive, thrive, and grow.

7 Dark Matter Is Evil and Destructive

Dark matter has been used as a plot device in many movies and TV shows—The Expanse, Star Trek, Futurama, X-Files, and even Scooby Doo, to name just a few. But is it really sinister, nefarious, and evil?

Dark matter is totally invisible, and it has never been seen or detected, yet it makes up 27% of the matter in the universe. It’s basically the stuff in the voids between suns and galaxies. Most scientists believe this invisible material is made up of WIMPS—weakly interacting massive particles—and those particles have a mass much denser than a proton. But they react so weakly with other matter that they’re difficult to detect (i.e., “dark”).[4]

Proxima Centauri b is the closest earth-like (and possibly livable) planet to us—at a measly four light-years away. And using the technology we have now, it would still take over 60,000 years to travel there.

But let’s not confuse the proximity of another habitable planet with the possible existence of other earth-like planets. Astronomers estimate there are 300 million to 6 billion potential Earths in the Milky Way galaxy alone. And with 10 trillion galaxies in the universe, there could be 76,000,000,000,000,000,000,000 stars out there similar to our sun, with orbiting habitable planets.[5]

5 Once We Perfect Speed-of-Light Travel, We Can Zip Around the Galaxies

Warp speed, hyperdrives, and other futuristic technologies are always effective in fiction for zipping from planet to planet and galaxy to galaxy. But in the real world, light-speed travel, or even near-light-speed travel, is an impossibility.

Einstein told us in his Theory of Relativity that as objects increase in speed, they gain mass—get heavier. So any object accelerating to even close to light speed would start to have an infinite mass or energy. And that just can’t happen. A photon, which has no mass/weight, has been accelerated in the lab to 99% the speed of light, but the energy required to propel even one gram of anything, would take an infinite amount of energy.

Bottom line, nothing with a mass can ever reach the speed of light.[6]

4 The Big Bang Was an Explosion

The universe and everything in it started with a giant explosion. I mean, it’s right there in the name—The BIG BANG Theory. But cosmologists are always trying to clarify that.

Scientists have accepted the theory that the universe began 13.8 billion years ago when an infinitesimally small, dense ball of matter went bang. But did anything really blow up and explode?

The consensus is that everything started with a rapid expansion—not a blast-like bomb detonating. And that rapid expansion (faster than the speed of light) was of space, not the objects in our universe. Everything is still in the same position now as it was 13.8 billion years ago, but it’s the space between those objects that is growing. This explains why there is no void in the center of our universe, which we’d expect to find with an explosion (a bang) when everything is blasted out from a central point.[7]

3 Aliens Could Come to Earth

That sounds plausible, especially considering the thousands of UFO sightings in North America each year. And if only a fraction of those encounters were genuine, one could reasonably assume that alien visitors to Earth are a possibility.

With 76,000,000,000,000,000,000,000 stars in the universe having habitable planets orbiting them, there’s absolutely no doubt that there’s other life out there—some developing, some intelligent, and perhaps some technologically advanced. The question is: could those advanced beings travel to earth?

Our galactic neighborhood alone, the Milky Way, is 100,000 light-years across, and even aliens have to adhere to the logistical problems of space travel—food, fuel, radiation, etc. Right now, the fastest man-made object in space is the Voyager craft, traveling at a blistering 11 miles per second. But even at that rate, Voyager wouldn’t reach the nearest star for 73,000 years. Given all the perils en route, how could any being conceivably survive a journey that might take millions of years?

It’s like Neil DeGrasse Tyson said, “Scientifically, we have a rule: you want to be alive at the end of your experiment, not dead.”

2 In Space, No One Can Hear You Scream

As the saying goes, in space, no one can hear you scream. And since space is a vacuum, with no substance for sound waves to travel through, that statement makes sense—a scream shouldn’t even be able to leave your lips.

However, NASA researchers now say it depends on where you are in space. Listening in on an immense (gas-rich) black hole near the Perseus cluster, a galaxy 250 million light years away, scientists heard all kinds of eerie sounds. So if you want to scream in an area of space with dense gases, plasma, and other particles, go ahead—you won’t be wasting your breath.[9]

1 Our Sun Is a Giant Fireball

The hydrogen atoms in the core of the sun slam into helium atoms and fuse together. That fusion—or that nuclear reaction—releases large amounts of energy, just like a nuclear power plant. And those reactions have been powering the sun for four billion years. Luckily for Earth, the density and gravity of the sun are so great that it keeps everything together and prevents itself from blowing up.[10]