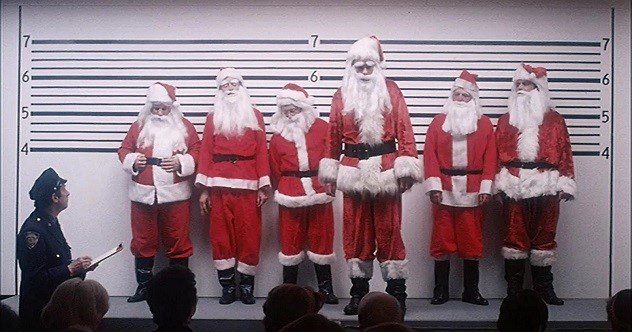 It’s the most wonderful time of the year, or that is what Andy Williams merrily proclaims in his hit song that crashes face-first into all stores at the beginning of the festive season (and in some cases even before that). What is never mentioned in all the joyous writings of the jovial holidays and endless feasts is the stress it places on people, particularly their relationships. Rising costs and familial pressures to love everybody, allowing the family to take over your home for a few weeks could cause even the most solid parent to devour most of the eggnog, leading to fights and conflict.

In fact, Christmas is blamed for such levels of conflict that it’s considered a contributing factor in divorce shortly after that. Whether you are part of a family that loves to bicker or spend Christmas with smiles and hugs, here are 10 fights and battles fought around the festive season that might make you rethink your hate for the silly season.

Related: 10 Unconventional Christmas Traditions From Around The World

Leading up to the historic bout, Tommy Burns had defended his title against 12 men, no small feat. Yet on the day after Christmas in 1908, held in Australia, it was Jack Johnson who beat out his Canadian counterpart. But not before taunting him and allowing him a free shot or two just to rile him up and show him that there was no fear. Jack meant business. With racial tensions brimming (considering the time), the taunting that ensued after Johnson so soundly beat his opponent caused unrest to such an extent that the police eventually piled in and stopped the show.

On that day, Jack Johnson became the first black world heavyweight champion. Afterward, he had to endure an endless streak of white boxers being thrown at him in the racially motivated hopes of ending his reign. Johnson only left carnage in his wake, though. Ironically Boxing Day has nothing to do with boxing as a sport, but the day will live on in infamy among those who are aware of Johnson’s antics.[1]

Being a predominantly Islamic country, the Afghans don’t celebrate Christmas. The Russians, however, do. Imagine eating yourself into a carb coma only to have to get into your full kit and invade a Middle Eastern country. On the eve of Christmas of 1979, the Soviets sent in around 30,000 troops, toppling the current government and installing a Soviet-friendly president named Babrak Karmal and plummeting the country into a civil war that cost an estimated one million civilian lives.

In what was ultimately a failed campaign for the Soviets, they battled the U.S.-backed mujahideen for almost ten years before an accord was struck with Pakistan, the United States, and Afghanistan. The withdrawal of the Soviet troops was completed on February 15, 1989, also effectively ruining Valentine’s Day.[2]

Built in 1929 as a Belgian steam passenger ship, the Leopoldville was converted into a vessel ferrying troops to battle by the Ministry of War Transport in WWII. On its way to reinforce troops locked in combat at the infamous Battle of the Bulge (more on this later), the ship encountered a German U-Boat that fired two torpedoes, effectively ending the voyage in an explosive groan.

Some 2,235 officers and servicemen of the U.S. 66th Infantry Division—who were being transported to the upcoming battle—and a crew of 139 men were on board when the explosives struck. The British destroyer escort, the HMS Brilliant, attempted to rescue those stranded survivors. However, the rescue attempts were made difficult by the bobbing current. The master, 55 crew members, and 763 American soldiers perished at sea.[3]

7 Battle of the Bulge

Many people, especially those in the southern hemisphere, dream of a white Christmas. The white decked trees, the fireplaces crackling in the living room, hot chocolate for the tummy-tums. That was not the case at the Battle of the Bulge. On December 16, 1944, Hitler launched what is known as the final Blitzkrieg of World War II. The large-scale attack by three German armies of hundreds of thousands of soldiers along the front of the Ardennes Forest of Luxembourg attempted to capture Bastogne and aimed for Antwerp in Belgium.

In what was eventually one of the single bloodiest battles of the war, the siege was eventually broken (but not ended) on the day after Christmas by Gen. George S. Patton Jr., whose third army came to the rescue, breaking through the Germans with his tank units.[4]

We touched on this matter earlier—the effects of too much eggnog turning even the most civilized of interactions sour. That is exactly what happened at the great eggnog riot, and it sounds like more fun than it actually was. ‘Twas the year 1826, at West Point, when the academy’s 260 cadets, known for their bodacious drinking, were snubbed by the powers that be. They had made the executive decision not to add alcohol to the traditional Christmas Eve eggnog. The cadets took it upon themselves to spike the nog, leading to copious amounts of alcohol consumption and ultimate riots, which included bouts of vandalism and assault on a superior officer.

Of the 206 cadets, as many as 90 could have been indicted. However, considering the poor reflection that would have on the academy, 19 of the most aggressive offenders were identified and expelled. Among those who seemed to have managed to escape the night relatively unscathed were Jefferson Davis (later president of the Confederate States president) as well as future general Robert E. Lee.[5]

With the advent of railway transport that turned the gears of war, General John Hunt Morgan was entrusted to cut the supply lines of the Union army by attacking and destroying certain key points. In what is now known as the Christmas Raid, although it took place after Christmas day in the final days of December, Morgan took his cavalry and launched a raid into Kentucky.

The raid saw horsemen decimate Union supply convoys of food, forage, and supplies from Louisville, destroy essential trestles (or bridges), and fight a series of skirmishes that resulted in magnificent losses for the Union army. Before long, it was mission accomplished as Morgan took his command back to Tennessee.[6]

One of the most celebrated moments of the American Revolution happened on Christmas Day in 1776. After several months of significant defeats suffered by Washington’s army, which resulted in their loss of New York City and other strategic points in the region, Washington took his army of around 5,400 troops in the hopes of surprising the Hessian force during their festive celebrations. Taking on the icy waters where heavy artillery, horses, and the support of experienced seamen, about 2,400 made it over the river. About 3,000 men and crucial artillery failed to reach the meeting point in time.

At 8 am on the morning of December 26, the groggy Hessian defenders were caught with their pants down, underestimating the patriot threat, and Washington’s men quickly overwhelmed the defenses. The failure of the artillery to arrive cost Washington dearly, and they were eventually forced to withdraw. However, news of the victory quickly spread and raised the spirits of the American colonists.[7]

3 Sinking of the Scharnhorst

The Scharnhorst, one of the German fleet’s most vaunted and dangerous warships, had been tormenting the seas for the duration of WWII. In 1943, information reached the HMS Belfast that it had been deployed from a Norwegian base to intercept a convoy making its way back to Britain.

In a battle fit for a silver screen adaptation out of the Christopher Nolan playbook, the convoy—made up of numerous ships, including the Scorpion, Norfolk, Sheffield, and The Duke of York—left the Scharnhorst fleeing with its tail between its legs. A gun-blasting rabbit hunt ensued with direct hits and near misses, but in the end, it was the HMS Belfast that landed the killer blow and condemned the Scharnhorst to the depths of the icy ocean. Of the 55 torpedoes that were fired, 11 hit the target, and of the 1,968 men on board, only 36 survived.[8]

When Mussolini’s war in Ethiopia was already not going to plan when a 200,000-strong Ethiopian army launched a counter-offensive on Christmas Day in 1935. What was known by informed circles as the “Black Period” of the war, the counter-offensive gave rise to the “Harvest of Gold,” in which Mussolini asked his own countrymen back home to raise funds for the war as a pledge to his fascist regime. The public donated valuable personal effects, including wedding rings. In exchange for gold jewelry, they were given rigs of steel to show their commitment to the cause.

The counter-offensive was met with initial success, but the superior Italian weapons and the use of illegal chemical warfare ultimately crushed any chance of victory.[9]

In Quechua, the primary language in this particular region of Peru, the word Takanakuy means “when the blood is boiling” or “to hit each other.” In short, this day is celebrated (is celebrated the correct word?) annually on Christmas Day and involves people of all ages and sexes coming together and beating each other up, or at least watching people settle scores with their fists.

The ultimate aim of the event is to begin the new year in peace, allowing those who do not have access to law enforcement or alternative dispute resolution to settle their scores in a public arena. The conflict is mutual, and like any Christmas fight, it starts and ends with a hug. The festivities originated during colonial times, and to this day, the Peruvian tradition carries with it a festival of celebration, drunkenness, and religiosity to go along with the hitting.[10]

10 Real-Life Criminals That Are Considered Heroes by the Public