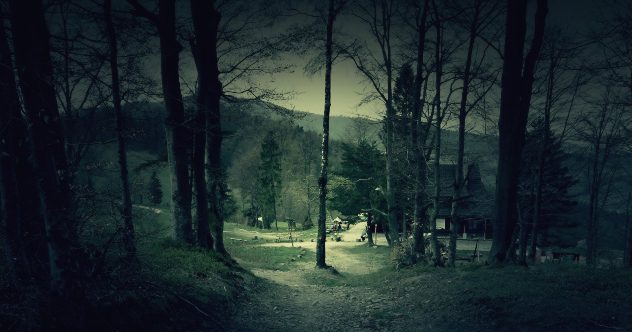 There is just something about small towns in America. Every one of them is a little bit different. Some small towns are beautiful; some are historically significant. Still, others are remarkable for famous residents. Our list today, however, is not about any of those things. It is about small towns with creepy myths.

All across the United States, myths about heinous crimes, mysterious monsters, and spooky locations persist. Some of these myths have become widely known, while others are only locally famous. Still, the list below is certainly not for the faint of heart. Take caution from Alabama to Idaho, Rhode Island to Colorado as we go through ten creepy small-town myths.

Related: 10 Creepy Mysteries From Around The World, Including The Wailing House

We start our journey in the small town of Elmhurst, Illinois. Within the town, there is a cemetery with a creepy myth. The cemetery contains a life-size marble statue of a woman. If that weren’t unusual enough, the woman is wearing a wedding dress. All through the area, local legends persist.

Locals have reported the smell of fresh flowers and seeing a ghostly figure moving throughout the cemetery at night and even at the nearby high school! The woman who is immortalized by the statue is Julia Buccola Petta. Petta died over 100 years ago, in 1921, during childbirth. Not only was Petta a new mother, but she was also newly married. Her family elected to bury her in her wedding dress.

According to the myth, Petta’s mother repeatedly had nightmares following her daughter’s death. This is creepy enough on its own, but her daughter spoke directly to her in her nightmares, commanding her to open her grave. The grave was reopened, and Julia Buccola Petta was incredibly well preserved. Petta’s mother raised funds to have a statue commissioned, and the myth continued to spread and expand from there.

Fair warning, if this small-town myth creeped you out, be careful! They are just going to get more creepy!

Many people know about the witch hunts in New England. However, there was also a time when New Englanders feared vampires. One such tragic story relates to Mercy Brown. Brown had a difficult childhood, as her sister and mother both died of tuberculosis.

At just 19, she contracted the disease and passed away on January 17, 1892. Due to all the death surrounding Brown’s family, locals were suspicious. Many of them suspected that witchcraft, or vampires, were involved. After her burial, she was exhumed. Citizens thought her body was too well preserved (but was it really?) and took it as a sign of the supernatural.

Here’s where it gets weird. The vampire-fearing people of Exeter, Rhode Island, took out Mercy Brown’s heart and liver and burned them to ashes. If that weren’t enough, they fed those ashes to her surviving brother. He died just two months later. Locals around Exeter say that Mercy Brown’s ghost still haunts their cemetery.

In a small town in Texas, the Candy Lady still scares children and adults alike. According to a myth that started in the early 20th century, the Candy Lady lured children by leaving candies on their windowsills at night. She waits by the window for the children to grab the candy. Then, she grabs them!

Some children reportedly went missing, while others confessed to eating the windowsill candy years later. Other reports include a farmer finding rotting teeth around his farm, a sheriff’s deputy with his eyes poked out (and pockets stuffed with candy), and a dead boy with candy wrappers in his pockets.

As so much time has passed, it is hard to say how much is true and how much is a legend. Maybe this idea was created to try and stop kids from eating candy or trusting strangers, but one thing is for sure. The Candy Lady gives me the creeps!

Riverdale Road is a short road near Thornton, Colorado. What it lacks in size, it makes up for in legend. Locals have reported seeing the spirit of a runner and phantom vehicles. However, the most famous of these Riverdale road myths is the Gates of Hell. This myth refers to an old mansion (which is in total disrepair).

According to legend, a man burned his wife and children alive on the property. In the years since, there have been many reported ghost sightings. These include the ghosts of slaves hung on the property, a ghost of the madman’s wife, and even a ghostly pack of dogs. Stories of this kind have been told since the mid-1800s.

Whether true or not, it is probably best to stay away from Riverdale Road (unless you are a ghost hunter), especially at night!

The next small-town myth on our list is somewhat more recent than most. In the small town of Point Pleasant, West Virginia, a legend was born (or discovered?) in 1966. Apparently, an insect-like flying creature about the size of a man was seen flying around the town. This creature had glowing lights and bright red eyes. Because of its large wings and the combination of human and insect characteristics, locals dubbed it “The Mothman.”

The Mothman legend has gone on to be known outside the local area. There is even a 2002 film about the myth, The Mothman Prophecies. Locals and other paranormal experts have speculated about the Mothman. Some think it’s a government experiment; others think it may be an alien. Citizens continue to report sightings, even in 2016! Point Pleasant has enjoyed the national attention, I think, and seem to embrace what makes their town unique, even if it is creepy!

Not to be confused with the “Hell’s Gate” of Riverdale Road, Hell’s Gate Bridge in Oxford, Alabama, features a legendary myth. In fact, there are two. Both involve what happens to cars as they go over the road and can be traced back to the 1950s.

The first myth says a couple died driving off the bridge. Supposedly, if you stop on the bridge, the ghostly couple will sit in your car, leaving behind a wet spot. The second myth has spread more widely. According to this creepy legend, you will see hell itself if you look in your rearview mirror (or over your shoulder) as you cross the bridge. Spooky!

Either way, the bridge is now closed to cars and deemed unsafe to walk across.

One of the most prominent features of the small town of Canyon Hill, Idaho, is the Canyon Hill Cemetery. Like many other creepy small-town myths on our list, the cemetery is central. The local myth has a name, the “Midnight Jogger.”

According to believers, the jogger only appears in the cemetery and only in a specific place. Scared citizens have reported a knocking sound on their windows, attributed to the spectral spirit. It certainly seems like a very particular ghost! What are all these people doing in a cemetery at night, anyway? Considering the lack of things to do in small towns, this myth may have been created for fun or entertainment.

Another gateway to hell?! I guess the devil has to get around too. This one is in the very small town of Stull, Kansas. Their local legend is focused not only on hell but also Satan.

Supposedly, Satan appears in Stull not once but twice yearly. He appears in the town cemetery for the spring equinox and Halloween. Near the cemetery are the remains of a church that Satan used to portal back and forth from hell.

Another feature of the area is a hanging tree that was used to hang witches. Some people believe that Satan is attracted to the site for this reason. Amazingly, the cemetery is still in use, with new plots still being dug.

Our next legend is another mythical creature, this one from the small town of Quitman, Arkansas. As silly as it sounds, the Arkansas Dog Boy comes with a very dark backstory. Gerald Bettis was a child raised in Arkansas in the 1970s. He was a difficult child both in and out of school. The most concerning thing was his treatment of animals, particularly dogs.

Bettis tortured dogs and had a pretty disturbing worldview, even performing experiments on helpless animals. Later in life, he would take his anger out on his parents, abusing and, according to legend, even murdering them. The legend of the Arkansas Dog Boy is based on his story.

According to local myth, the Dog Boy is a half man, half dog, standing six feet and weighing more than 300 pounds. The myth also indicates that he chases his victims, nipping at their heels.

Arkansas is not the only state with a legendary creature with a silly, even comical moniker. In the town of Clifton, Virginia, the Bunny Man makes his home.

The origin of the Bunny Man is connected to a local asylum. Patients from the asylum were being transported when their vehicle crashed. One patient escaped and became the Bunny Man. This was back in the early 1900s, but the legend persists. He was given his name because when police were looking for him, they kept finding skinned, partially eaten rabbits. In particular, many of these rabbits were hung on Fairfax Bridge.

Local legend has changed the name to the Bunny Man Bridge. This is one myth on our list that may have more truth to it than others do, making it even more creepy. In October of 1970, more than 60 years after the bus crash, several people reported seeing a man in a white suit with bunny ears and carrying a hatchet. Does this make anyone else think of the movie Donnie Darko? The town of Clifton embraces the legend now, particularly around Halloween.

Ten Authors Who May Be the Next Stephen King