No matter whether you’re looking for a morning pick-me-up such as a Caffè Americano, latte, an iced cold brew coffee or espresso, or perhaps looking for a cold drink on a warm day such as a refresher or Frappuccino, with over 34,000 Starbucks stores worldwide, you’re sure to find one close by that can accommodate your specific tastes.

With ordering options such as requesting specific milk, more syrup, or a different flavor, substituting sweeteners, or adding cold foam, there seem to be endless options that allow customers to create their perfect drink. In addition to beverages, Starbucks also offers breakfast and lunch sandwiches, bakery items, and cake pops that customers can pair with their beverage of choice.

While there have been instances where a customer has placed an order with a long list of specific customizations from the above categories, the 10 people on this list received rather disgusting and disturbing add-ins to their Starbucks orders of both beverages and food, which were definitely not by request.

Related: 10 Food Additives That Aren’t As Bad As We Thought

Kelly Burns and her mother, Karen Molnoskey, are frequent customers of their local Starbucks in San Marcos, Texas. However, their love for the coffee giant quickly fizzled after a horrifying discovery in their drink order.

On the morning of August 31, 2016, Burns went through the drive-thru of the San Marcos Starbucks store and ordered a venti mocha for herself as well as a venti coconut mocha for her mother. Unfortunately, after consuming about half of her coffee, Burns began experiencing stomach trouble and noticed a rattling sound inside her cup.

Burns immediately took her cup to the sink to pour out the coffee in hopes of finding the culprit, and that’s when she found two wafer-like items. Molnoskey took the cup, along with the objects inside, back to the Starbucks store, where the manager informed her that the objects were cleaning tablets used to clean the machines each morning.

Burns went to the ER for an evaluation, and thankfully, she was assured that she would recover from the incident within a few days. While Starbucks offered to pay for Burns’s medical bills, she was not concerned as her health insurance would cover the expenses. Instead, her biggest concern was for others, including her five-year-old daughter, who also orders hot chocolate from the restaurant, and what their outcome could be in such a situation.[1] 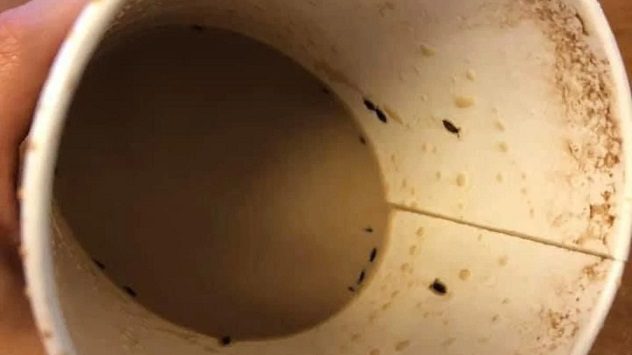 Sara Lyle ordered a Skinny Mocha from her local Starbucks in Mount Pleasant, Wisconsin, on September 6, 2019. However, after drinking approximately three-fourths of the coffee, Lyle thought she felt a bug in her mouth. Hoping that perhaps what she felt were solid coffee grounds, she opened the lid only to discover a dozen dead bugs both in the coffee and on the inner walls of the cup.

Lyle proceeded to call the Starbucks store to inform them of what happened and advise them that she would bring in the cup as proof of the incident. At that time, Lyle claimed the employee she spoke to stated they were aware of a bug problem within the store but had difficulty rectifying the situation due to a constant influx of customers.

Lyle also contacted the local health department, who inspected the store but stated they did not find any evidence of contamination either in the food and drink products or on contact surfaces. Lyle was given a $20 gift card as compensation for the incident, although it’s hard to imagine she would be willing to return.[]

Amanda Vice and her two-year-old daughter Payton were sharing a Java Chip Frappuccino purchased from a San Bernadino Starbucks on February 6, 2016. However, it wasn’t until Vice’s mother-in-law noticed her drink had a metallic smell, that Vice began inspecting her own drink and noticed blood both inside and around the rim of her cup.

Vice contacted the Starbucks store, who confirmed one of the baristas was, in fact, bleeding, and they stated the employee was no longer making customers’ drinks. While the store tried to compensate Vice with free drinks for a week, she declined and instead insisted the employee be tested to alleviate health concerns such as HIV. When Starbucks refused, Vice hired an attorney.[3] 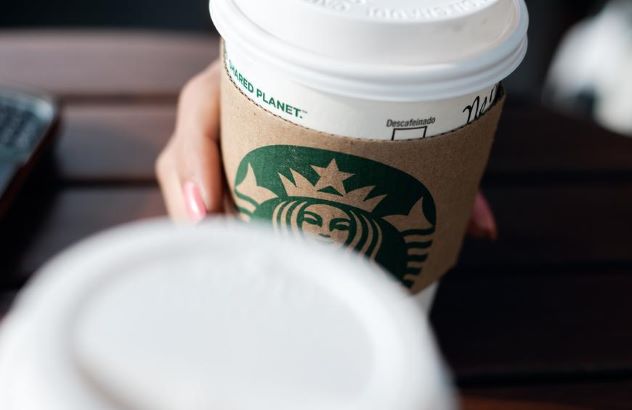 Matt Miller and his unnamed wife were visiting London, and on the morning of October 25, 2017, she decided to stop at a local Starbucks to order a Mango Passion Fruit Frappuccino. Unfortunately, when she took a gulp of the beverage, a twisted piece of metal became stuck in her throat. Thankfully, she was able to pull it out without any serious injury.

Starbucks got wind of the incident after Miller posted an image of the metal wire to Twitter and stated they were starting an investigation into what happened. Starbucks sent Miller a $20 (£15) gift voucher as compensation.[4]

Kim Dillon and her husband Brian were spending a weekend in August 2015 out and about when they decided to stop by a Starbucks within Fry’s Marketplace in Phoenix, Arizona. The couple both ordered the same drink—a venti sugar-free latte.

However, after taking a sip of her drink, Kim felt something unusual in her mouth, and after spitting the unknown object out, she discovered it was a legless, skinless lizard. The Dillons immediately placed the lizard in a bag and returned to the Starbucks location to inform the employees. While the staff was apologetic and offered the couple gift cards, they refused the offer.

Both Starbucks and the grocery chain Fry’s began looking into the matter along with completing deep cleanings and consulting a pest control company. The Dillons’ experience was deemed to be “an isolated incident.”[5]

When Matthew Tyler Mitchell went into a local Starbucks in Greenwich, Connecticut, on August 30, 2021, all he wanted was a simple black coffee. Unfortunately, what he received wasn’t coffee at all but cleaning solution instead.

One gulp of the “coffee” caused Mitchell to feel an immediate burning sensation within his mouth, throat, and stomach. When he inspected his drink, rather than seeing black coffee, he saw a blue chemical solution. Realizing that he had ingested an unknown substance, Mitchell naturally became dizzy and felt nauseous.

When Mitchell notified the Starbucks manager, he was told that the mistake was made by a new employee who was unaware that the coffee brewer had been filled with a cleaning solution, specifically Urnex Urn and Brewer Cleaner, rather than coffee. Apparently, the only protocol the store had in place to alert employees when the cleaning solution was in the machines was placing an empty upside-down cup on top of the brewer.

Mitchell has since filed a lawsuit against Starbucks due to the employee’s negligence and the lingering medical issues he has experienced as a result of his horrific experience.[6]

4 Shards from a Whipped Cream Blender 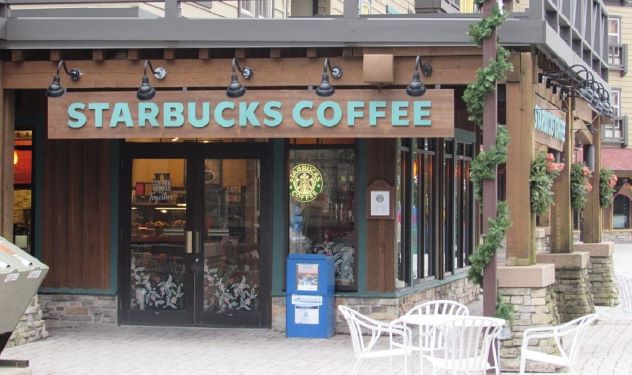 Kirsten Sutherlin went into a West Virginia Starbucks on November 27. 2014, and ordered hot chocolate for her son. However, as her son began to drink the hot chocolate, he complained that something hard was in his mouth. When her son spat out the hard object, Sutherlin discovered a metal nut, a hard cylindrical piece of plastic, and other sharp plastic pieces within the drink.

When Sutherlin took the cup back into the Starbucks store, an employee informed her that the objects in her son’s drink had come from a whipped cream blender that had broken. To make matters worse, even though the employees knew the blender was broken, they continued to use it when making drinks for customers.

Due to the contaminants in his hot chocolate, Sutherlin’s son had to have a pediatric upper GI endoscopy and other medical treatments. So Sutherlin filed a lawsuit against Starbucks in light of their negligence and failure to serve drinks that were safe for consumption.[7]

Taylor Boullard purchased a cake pop from a Boston, Massachusetts, Starbucks in May 2021 on her way home from the airport. However, when she bit into the cake pop, the frosting strangely seemed to pull away from the outside. Thankfully, before Boullard could begin chewing, she spotted the mold inside and spit it out.

After Boullard posted a video to TikTok regarding the incident, Starbucks responded to her and stated they were investigating the issue. They also sent Boullard a $25 gift card.[8] An unnamed off-duty LAPD officer visited a Starbucks location inside Target on June 19, 2020, in Diamond Bar, California, and ordered a Frappuccino. However, approximately halfway through his drink, he noticed a furry, cloth-like item that, at the time, was believed to be either a tampon or other feminine hygiene product.

The officer originally believed that the item had been maliciously placed in his drink as he paid for his order with a police union credit card. After an investigation into the matter, reviewing surveillance footage, and interviewing the barista on duty at the time, the barista admitted to accidentally scooping up a cleaning cloth that had previously fallen into the ice. The cloth was then unintentionally blended with the drink’s ingredients. The case was sent to the Los Angeles County District Attorney’s office for review, but there was no malicious intent found regarding the circumstances that occurred.[9] 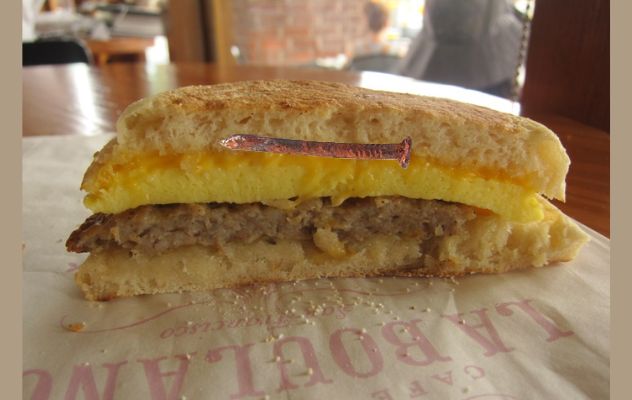 David Dixon ordered an egg and sausage breakfast sandwich on March 15, 2009, at a Seattle, Washington, Starbucks, where he was meeting some co-workers for breakfast. Unfortunately, upon biting into the sandwich, Dixon experienced a “pungent iron taste and pain from a back molar.”

Upon noticing the commotion, a manager approached Dixon to see if he was okay. The manager also offered to provide another breakfast sandwich to him, but in return, Dixon had to hand over the rusty nail. Dixon agreed, but not before one of his co-workers took pictures to document the incident.

Given that Dixon suffered a fractured tooth, ligament inflammation, and injury to his temporomandibular joint, he filed a lawsuit against not only Starbucks but their suppliers Sara Lee and SK Food Group.[10]