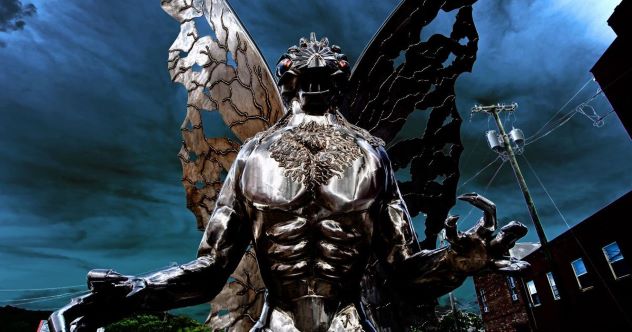 What is it about the human psyche that makes us want to believe in something in which there is no hard evidence or proof? And what is it about the mythological Mothman that has held our interest since its first appearance in the 1960s? The bat-like cryptid has taken hold of the American imagination and managed to assert itself as one of the great modern myths. It all began in 1966 when an alleged sighting of the Mothman in West Virginia made the news in the Point Pleasant Register.

In this list, we look deep into the myth of the Mothman and examine its origins, which may be older than you think.

10 Mothman in the News

The Mothman made the paper after the first reported sighting. On Wednesday, November 16, 1966, the Point Pleasant Register featured a story with the title, “Couples see man-sized bird…creature…something!” This was the first time the Mothman made an appearance in the media, but it wouldn’t be the last.

The article is an account from two young couples regarding a very odd occurrence they experienced. The couples told police that something had chased them near Point Pleasant, West Virginia. The witnesses described it as a man-like creature, about two meters (six to seven feet) tall, with a wingspan of three meters (10 feet). They reported that the creature followed them, gliding over their car, and when they shined lights at it, red eyes glowed back at them.

A few days before this sighting, gravediggers in Clendenin, West Virginia, reported seeing a man-like creature in the trees above them. The sightings continued for 13 months, ending after the tragedy of the Silver Bridge collapse.[1]

9 Sinister Intent or a Warning?

It should be noted that a government investigation determined the cause of the collapse was due to a fracture in the infrastructure, not the Mothman. The fracture resulted from “the development of a critical-size flaw over the 40-year life of the structure as the result of the joint action of stress corrosion and corrosion fatigue.” It took under 20 seconds for the bridge to collapse into the river, with 32 vehicles and 46 people falling victim.[2]

8 Chicago Has Its Own Mothman

Chicago may have its own resident Mothman haunting the area. Since 2011, witness accounts of a human-like figure flying around town have been pouring in. Many of the witnesses reported seeing a flying man-like creature with glowing red eyes, giving them a “sense of dread” when they saw it.

The sightings around Chicago have mainly occurred at night and around bodies of water. Although many of the media reports of the sightings have been treated by journalists with skepticism, sightings of the Chicago Mothman keep coming in. One of the strangest Chicago sightings was by a man who witnessed a human-like figure perched atop the Willis Tower. It was daylight when the man allegedly watched the figure jump off the skyscraper and fly away.[3]

7 Was Mothman at Chernobyl Before the Tragic Explosion?

In 1986, a reactor failed at the nuclear power plant in Chernobyl, Ukraine. The failed reactor caused an explosion that killed 30 people within the first few months and created a contamination area of 150,000 square kilometers (57,915 square miles) in Belarus, Russia, and Ukraine. The immediate unihabitable area around the power plant, the “exclusion zone,” covers 2,600 square kilometers (1,000 square miles). The victims number far higher than the 30 that died shortly after the blast. Since the disaster, thyroid cancer has been documented in 1,800 children.

Reportedly, days before the reactor failed, workers at the power plant claimed to have seen a creature around the plant. They called this creature the “Blackbird of Chernobyl.” The blackbird has some similarities to the Mothman, and some believe it may very well be the Mothman.

Like the Mothman, witnesses say the Blackbird of Chernobyl appeared days before a tragedy, had glowing red eyes, and a large wing span. And like other sightings of the Mothman, these sightings remain difficult to confirm.[4]

6 Could a Sandhill Crane Be the Real Mothman?

What else besides a harbinger of doom has many of the characteristics of the Mothman, including a large wing span, red eyes that glow in the dark, and a habit of appearing around bodies of water? The answer is… a sandhill crane.

Sandhill cranes are large, with a wingspan of nearly two meters (five to six feet). When they fly, they stretch their neck out with their wings spread wide and their feet trailing behind them. This makes for an odd shape when seen flying overhead on a dark night. Especially when one might have the Mothman on their mind.

Don’t like the sandhill crane explanation. Many others also persist, including an alien, a barn owl, and a Mative American legend—the Thunderbird.[5]

There is a petition on Change.org with nearly 21,000 signatures and a goal of 25,000 to replace every Confederate statue in West Virginia with that of the Mothman.

The petition to the West Virginia State Senate says, “The Confederate Statues should not represent our country. The Robert E. Lee statue is already being removed. Why not fill that space with a statue of Mothman? Mothman is the first urban legend to denounce racism and oppression. Mothman is the perfect candidate to replace Robert E. Lee and any other Confederate Statues.”

With the draw the Mothman brings to the tourist industry in West Virginia, perhaps the petition signers have a good point. And this perfectly leads us into the next entry…[6]

4 Mothman Brings in the Tourists

The legend of the Mothman brings in a lot of tourist money to West Virginia. In Point Pleasant, there is a Mothman statue, a Mothman museum, and a Mothman store.) The town is making the most of its fabled history. They erected the statue in 2003 and changed the name of a popular park to Mothman Park.

The museum includes props and memorabilia from the movie that helped make Mothman famous, “The Mothman Prophecies.” It also includes press clippings, eyewitness accounts, and photographs of the Silver Bridge disaster. After learning all about the Mothman in the museum, visitors can step into the shop and buy exclusive Mothman merchandise. They even have baby-sized onesies for the smallest of Mothman fans.[7]

3 What Does Sleep Paralysis Have to Do With It?

Sleep paralysis is a temporary inability to move upon awakening or falling asleep, often involving hallucinations. Scientists believe sleep paralysis to be a brain glitch that occurs between waking up and still being in a REM dream state. Many people who experience this phenomenon often report seeing demon-like beings that fill them with a sense of dread.

Descriptions of the eyewitness accounts of the Mothman are similar to the common demon archetypes seen by people during an episode of sleep paralysis. Could the Mothman sightings be a large bird quickly flying by in a dark sky, bringing out fears and anxieties from the subconscious mind?[8]

2 What Is the TNT Area in West Virginia?

While the existence of the Mothman remains controversial, the “TNT Area” in West Virginia is decidedly real. During World War II, the area contained a massive ammunition manufacturing facility so large it once employed a few thousand people. Because there was such a large number of explosives being produced, for safety reasons, they were stored in bunkers around the 32.5 square kilometers (12.5 square miles) of land now known as the “TNT Area.”

When the war ended and there was no more need for the ammunition plant to continue, the land was abandoned. As you can imagine, the acres of land were later found to be severely contaminated by the byproducts from the manufacturing plant.

1 Could the Mothman be a Scottish Banshee?

The legend of the banshee of Ireland and Scotland is a mythical spirit, often said to have glowing red eyes. The banshee warns all those who see it of impending death. Interestingly enough, West Virginia was largely settled by Scottish and Irish immigrants.

Filmmaker Seth Breedlove explored the connection between the banshee and the Mothman and wondered if the immigrants brought the folklore with them to West Virginia. In fact, the legend of the banshee can be traced back to old Gaelic oral traditions that had been passed down for centuries.

Perhaps the Mothman is not nearly as modern as we think. The Mothman may very well be an ancient version of a folk story that has been in our collective subconscious for much longer than we thought.[10]