10 Fascinating Things You Might Not Know About Death Valley 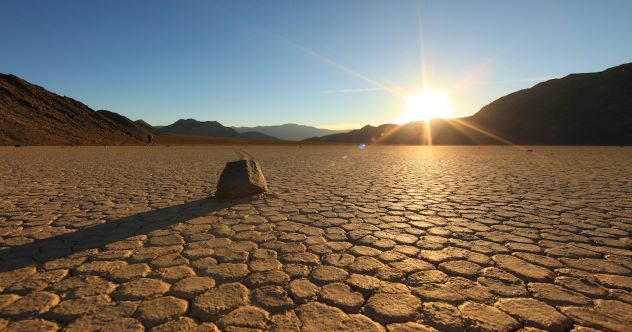 As one of the dryest, lowest, and hottest places on earth, Death Valley is known as a place of extremes. But it’s also a place full of surprises, history, geological anomalies, and, despite its namesake, life.

So whether you plan to visit this surreal landscape one day or are just intrigued, here are ten incredible things you might not know about Death Valley.

Much of Death Valley’s fame comes from its reputation as one of the hottest places on Earth and one of the driest in North America. And on July 10, 1913, the highest air temperature ever recorded was taken at Furnace Creek, when the temperature reached a whopping 134°F (57°C). That temperature still stands as the official world record. But some doubts have been cast regarding the reliability of this measurement.

As if undeterred and eager to re-stake its claim as the hottest place on earth, Death Valley has been churning out potential records for the hottest reliably recorded temperature ever since, especially in recent years. First, on August 16, 2020, temperatures at the Death Valley visitor center reached 129.9°F (54.4°C). Then, just under one year later, temperatures reached an astonishing 130°F (54.4°C). Just imagine a place where the average monthly temperature doesn’t fall below 100°F—June 2021 saw an average day-night temp of 102.8°F (39.3°C).[1]

Devil’s Hole is a water-filled geologic formation in Nye County. In 1952, officials made this isolated cave with its geothermal pool into a detached part of Death Valley National Monument. They did so to protect its indigenous pupfish, an ancient fish only found there. But besides the rare fish, there’s something incredibly unique and strange about the water there. It’s something you’ll only see if you happen to turn up at the right moment.

As it turns out, Devil’s Hole has proven to be an unusual indicator of seismic activity worldwide. Indeed, large earthquakes as far away as Japan, Indonesia, and Chile have been known to cause the water in Devil’s Hole to “slosh” around, not unlike water in a bathtub. In some cases, people have reported waves splashing as high as 6.5 feet (2 meters) up the walls, sweeping clean the shallow shelf so crucial to the pupfish. Essentially, worldwide earthquakes can create a “tsunami” in Death Valley.[2]

Throughout the 19th and early 20th centuries, dozens of mining towns sprung up within Death Valley, with many forming in the wake of several gold and silver rushes. But of these many towns that sprung up, few were destined to last long. Indeed, some of these towns, like Chloride City, existed for barely a year. Today, only traces, such as tin buildings and cement foundations, remain of these towns. Others have disappeared completely.

One of the most notorious of these mining towns was Panamint City, infamously founded by outlaws who gave up on a life of crime after finding silver in the Panamint Mountains. But while Panamint City had a booming population of 2,000 in 1874, the silver rush ended in little over a year. And in 1876, the town was destroyed by a flash flood.[3]

7 Stones That Move on Their Own

The flat desert terrain expanse known as the Racetrack Playa is one of Death Valley’s most peculiar features. That’s because it is home to many large rocks that seem to move on their own. These rocks, known as “sailing stones,” vary in size from a few ounces to hundreds of pounds. Even though no one has seen them move in person, the stones leave behind “trails,” and their positions have been noted to change. This has led many to believe they indeed do move.

The mystery of these moving stones stumped people for a long time. But in 2014, a group of researchers captured the rocks’ in motion for the first time using time-lapse photography. From this, scientists concluded that the strange movements result from rainwater freezing and clumping behind the stones. Propelled by light winds, this ice then slowly pushes the rocks forward.[4]

As if it wasn’t impressive enough to be North America’s hottest and driest place, Death Valley also lays claim to the lowest point. This lowest point is found in the Badwater Basin, which sits some 282 feet (86 meters) below sea level. Once home to an ancient lake, salt flats reaching over 200 square miles (518 square kilometers) now cover the basin, resulting in a strange and surreal landscape.

Although the lake is long gone, you can find a small spring-fed pool and boardwalk. Legend has it that the Badwater Basin got its name after a mule refused to drink from this pool. Of course, considering just how salty the water is, it’s no surprise that the mule refused.[5]

Looking around the arid landscape of Death Valley, it’s perhaps its little wonder that the place got its morbid title. But there’s also an interesting legend regarding the area’s name, one rooted in a genuinely true story.

In the early 1800s, a venturing group of pioneers got lost along the Old Spanish Trail after leaving it too late to cross a more well-known route over the Sierra Nevada Mountains. What followed proved a terrible and lengthy ordeal, with the party only surviving dying of thirst thanks to a snowstorm. But, amazingly, the group did make it through with only one casualty, largely thanks to two of their member having trained as scouts. Legend has it that as they left the valley, one of the men turned and proclaimed “goodbye death valley,” and the name has stuck ever since.[5]

5 Abundance of Life amid Extreme Landscape

You’d think little could survive in a place as hostile as Death Valley. But despite its namesake, Death Valley is home to all sorts of life, including coyotes, roadrunners, bobcats, mountain lions, bighorn sheep, lizards, toads, and even desert tortoises. There are also multiple species of birds and bats and several creatures that are endemic to the area, including the previously mentioned pupfish and several varieties of beetles and snails.

While there is sand in this desert-heat-like place, the dunes only make up a tiny fraction of Death Valley. Surprisingly, there are snow-topped mountains, craggy canyons, and open meadows to be found as well. Some years, when conditions are suitable, the arrival of spring triggers incredible wildflower blooms. These blooms transform the usually arid hills and valleys into seas of purple, gold, pink, and white flowers buzzing with life.[7]

Star Wars may be set in a galaxy far, far away, but some of the locations you see in the classic films were shot in Death Valley. That’s because the canyons and arid landscape of Death Valley proved a highly suitable location to shoot the scenes set on the harsh desert planet of Tatooine, known to fans as the home of Luke Skywalker.

Two films from the original trilogy, 1977’s Star Wars: A New Hope and 1982’s Return of the Jedi, feature scenes that were shot in Death Valley. And, if you know where to look, these locations remain relatively unchanged today. As a result, many fans have taken to creating tours and making pilgrimages to these sites, which may be the closest you can get to being inside the Star Wars Universe.[8]

The Ubehebe Crater is a large volcanic crater some 600 feet (183 meters) deep and half a mile (0.8 kilometers) across that may have formed as recently as 2,000 years ago. To the Timbisha Shoshone Indians, the crater has been known as “Tem-pin-tta Wo’sah” and is an important cultural site. It’s also noted to be a wonderful place to visit at sunset, where the colorful layers of rock become more pronounced.

Craters like the Ubehebe are the result of Maar volcanoes. Maar volcanoes result from steam and gas explosions that occur when hot magma reaches groundwater. The magma heats the water into steam which builds in pressure until finally erupting and exploding through the earth above.[9]

One of the most popular attractions in Death Valley National Park is Scotty’s Castle, a two-story Spanish Villa in Grapevine Canyon. But despite its name, it is neither a castle nor owned by a Scotty. Although the man who gave the place its namesake may have had you believe differently.

The 32,000-square-foot )2,972-square-meter) building was built in 1927 by Albert Johnson, a wealthy Chicago insurance executive. Albert was friends with a man named Walter E. Scott, a swindler and hustler who became infamous among locals due to his shameless lying and self-promotion. Although Scotty did live at the “castle,” the man never financed nor owned the place. But Scotty did manage to convince many others that he did. So much so that Johnson had to go to great lengths to prove that he, not Scotty owned the villa when many former victims of Scotty’s swindling came looking to sue for ownership.[10]

In 2015, the castle was nearly completely destroyed due to a flood, as Death Valley received a year’s worth of rain in a single afternoon. The castle, owned by the National Park Service now, is being renovated with plans to open it to visitors once again.