10 Games That Bombed but Are Actually Good 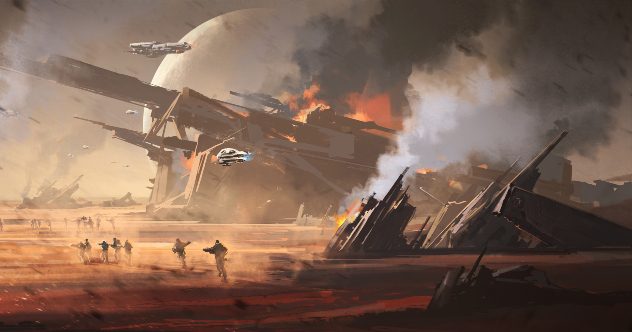 The global video game market is worth around $196 billion annually and will continue to expand by more than 12% yearly. That’s a tremendous amount of money and represents nearly twice as much revenue as music streaming. With so much cash sloshing around, it’s no surprise that there’s a lot of competition.

With video games, there are classics, and there are some that people have overlooked, but this doesn’t necessarily mean they’re bad. Developers are constantly striving to find the next Minecraft or Grand Theft Auto. But it’s a tricky business that requires a combination of skills, business acumen, and a little luck. Some games fail because they deserve to; they’re simply not good. Others don’t quite make it for various reasons but may be worth a second look. Here are ten games that bombed but are actually good.

There are games with more sophisticated combat scenes than The Line, and there was a lot of competition in the third-person shooter genre back in 2012 when this game came onto the market. The game struggled to make an impact, and sales were disappointing.

The Line’s basic problem was marketing. Neither the publisher, 2K Games, nor the developer, Yager Development, emphasized what made this game different from the competition. But it was different.

Players find themselves in a morally ambiguous world where there seem to be no right choices. This is a powerful story that realistically captures the horrors of war. As word has spread, sales have picked up, and The Line still gets great reviews.

Many players have grown up with Duke Nukem. The first in the series came out as long ago as 1991. Forever, the fourth installment, extended the series in 2011. Duke Nukem games don’t appeal to everyone, the adolescent humor and macho culture are not to everyone’s taste, and it certainly isn’t “politically correct.” It took a surprising 14 years to develop the game, earning it a Guinness World Record.

Duke Nukem Forever sees our hero return from retirement, and he gets back to work saving the planet from an alien invasion. Forever didn’t sell too well. Critics pointed out that the graphics were dated, and the trademark humor was a bit heavy. The market had a lot of newer stuff on offer that drew away potential customers. However, die-hard Nukem fans maintain that it’s not a bad game; it delivers everything a fan might want.

Eighth in the Wizardry series and the final part of a trilogy, this game became very highly thought of in the gaming world. The developer and publisher, Sir-Tech, first released the game in 2001. They went out of the development business in 2003 but continued to support Wizardry 8, and the game was re-released in 2014.

It got good reviews, won various awards, and became successful. But it took time. Perhaps one problem was that it was the final installment of a trilogy. This is a risky venture because the seller hopes that people who bought the first two will buy the third. After all, nobody just buys the final installment of anything. Naturally, this tended to limit sales. Another possible hitch was that it came out nine years after Wizardry 7, and the series lost a bit of steam in the meantime.

In 2004, Tim Schafer, the head of Double Fine Productions, said of his company’s Psychonauts that they were working on what could “conservatively be called the greatest game of all time, ever.” Quite a claim. After more than four years of development, psychonauts finally hit the market in 2005.

In 2001, Microsoft accepted the game and wanted it to be part of an exclusive library for its Xbox console. The company changed its mind in 2004 and decided that it would also make the game available on Windows. The development process suffered various setbacks that everyone found difficult to deal with. However, when Psychonauts finally appeared, critics praised it, and it won various awards. But critics are not customers, and the paying public was reluctant to buy it.

The publisher Majesco posted a loss and said they wanted nothing to do with console games. Double Fine took over the rights to Psychonauts and made it available on a wider range of platforms. Sales jumped and finally reached 1.7 million copies.

Pathologic 2 had to overcome the problems that the first installment had suffered. A Russian company, Ice-Pick Lodge, released the original game in 2005, and it received good reviews in Russia. However, the English version of this survival game was not so well-received. Critics pointed out that the translation was poor, and the graphics were not up to scratch.

The general feeling was that the game, at least the English one, was clunky, although some praised the overall concept and atmosphere. Of course, sales suffered as a result. But Ice-Pick Lodge was confident that it had a winning idea and decided to launch Pathologic 2 in 2019—they had to crowdfund to find the money to do it.

Pathologic 2 is a much-improved game. It had to win over disappointed buyers of the original, but it managed to do so and gained new fans. The two games are as different as chalk and cheese. Despite its drawbacks, Pathologic 1 is still worth a go.

Little Big Adventure 2 came out under the name of Twinsen’s Odyssey in the United States in 1997. Many potential buyers dismissed it as a kid’s game, but they should have had a second look. Reviewers described this single-player adventure game as “charming,” “original,” and “intriguing.” Available for MS-DOS and Windows, it was very sophisticated for its time and attracted a cult following.

The game may have been sophisticated, but the marketing wasn’t. This was probably down to the inexperience of the developer, Adeline Software. A small team of 21 worked on LBA; some had only worked on one previous game. This had disadvantages but also allowed the team to use its collective imagination. The result was a game that was very sophisticated in its time and still has considerable attractions today.

Okami, a Japanese game developed by Clover Studio, is a visual feast. The game mixes Japanese myth and folk tales from classical Japan to create an intriguing world of action and adventure. Critics loved it, consistently rating the game at the top of their lists. Its impressive visuals gained Okami a BAFTA Games Award for Artistic Achievement.

It was one of the last games that PlayStation 2 adopted before the introduction of PlayStation 3. Its basic problem was marketing; the developer didn’t emphasize the game’s considerable strengths, and it never quite found its niche.

As such, sales of this masterpiece were disappointing after its release in 2006. Nintendo adapted it, and HD versions improved its sales, but many game players still missed out. Some reviewers still describe Okami as a must for enthusiasts.

There is nothing seriously wrong with the original version of Beyond Good & Evil. A few reviewers pointed out some glitches but nothing serious. Publisher Ubisoft released the game to various platforms in 2003, and critics gave it favorable reviews. Unfortunately, the public was not convinced, and sales were so poor that some outlets quickly cut its price by 80%.

Beyond Good & Evil is a perfectly good game. The problem was that it was not sufficiently different to convince people that they should add it to their collection. In a highly competitive market, it’s not good enough to be good enough. A designer must find a unique selling point to make the game stand out. Still, those who picked up Beyond Good & Evil in the bargain bin were happy with their purchase.

This role-playing game did well in its native Japan, but the American public greeted its 2005 release with a general lack of enthusiasm. Developed by tri-Ace and published by Square Enix, Radiata was perhaps unsophisticated for a modern gaming public.

One critic said it would be an ideal game for a beginner. By 2005, people were used to more challenging fare. It’s not a bad game but might have done better if its designers had aimed for a younger audience. The people behind Radiata didn’t spend enough time thinking about their target market, and the game fell between two stools. This is a common problem in the video game world.

From the British publisher Conspiracy Entertainment, Raised in Space has become a cult classic since its release in 2002. The problem is that cult classics are not mainstream sellers. This strategy game raises the same sort of ethical questions that the others in the same series do.

Some critics compare Creatures with the Tamagotchi craze. If Tamagotchi passed you by, it was a digital pet that the Japanese company Bandai released in 1996. Owners had to look after their pets. Creatures indeed had a similar theme in that players are acting as caretakers. This might not appeal to fans of action games. This type of game will always find a market, but the market is relatively small.

Some retailers immediately started offering the game at a reduced price. Still, it’s challenging and interesting and still attracts fans. In fact, it’s refreshing to see that there are developers that don’t immediately aim for a mass-market hit.