10 Marvel Characters That Could Destroy Most of DC’s Characters 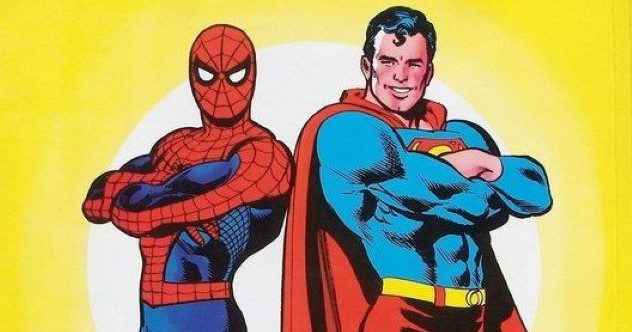 If they were men, they would be old men. But these are not mortals; they are giants. The palace of one stands in a city on the eastern coast of a vast country. Men know this city as New York, and in it lives Marvel. A vast land of plains, deserts, and mountains stretches west from Marvel’s halls, and where the land finally meets the western sea, another city stands – Burbank. Near the City of the Angels, DC has built a towering castle.

Although the two giants are not friends and compete for the hearts and souls of mortal men, there is a truce between them. Both have legions of warriors with powers that stretch the imagination. Both have loyal supporters, and some people admire both. But who would come out on top if it came to a showdown?

Marvel and DC both face the same challenge. They need to create superheroes, but these heroes must have an Achilles’ heel. Creating a character with limitless power would not make for a good story because nothing could defeat an omnipotent superhero. They must have weaknesses that make them vulnerable. Many of the best storylines rely on the hero overcoming a weakness; think of Superman and kryptonite.

Similarities between characters from both camps are inevitable. Marvel and DC have sometimes collaborated to pitch their heroes against one another. In 1976, for example, they brought Superman and Spider-Man up against each other. So, here are ten Marvel characters that could destroy most of DC’s Characters.

When a gang of bad guys kidnapped the wealthy genius Tony Stark to force him to build a weapon of mass destruction, they unknowingly bit off more than they could chew. Stark, who had graduated from MIT at just seventeen, built a suit of armor instead.

First stepping out into the Marvel world in 1963, Iron Man’s powers have evolved over the years. Perhaps the biggest leap forward came when Stark changed his own biology after a serious injury. His armor, at least partially, became a part of his own body. Stark is now truly Iron Man.

Yet Iron Man is still a man and has Tony Stark’s flaws. Stark is not perfect, and that is what makes Iron Man human.

The obvious DC equivalent is Machinehead. We don’t really know if Machinehead is human at all. He is effective, but all traces of human feeling and emotion seem to have disappeared. For all his defects, Iron Man would win a showdown because humanity always triumphs in the end.

Some say that Wonder Woman is the closest match to Marvel’s Thor in the DC realm. There are similarities—if you watch Wonder Woman and think of Thor, you’ll see them for yourself. But there is a more obvious parallel—DC’s Viking Prince.

Both Thor and Viking Prince are based on Norse characters. They are both brave warriors who are true to their beliefs and steadfastly defend what is right. However, one difference gives Thor the edge over his DC rival. Thor is a god, and Viking Prince is a mortal.

Although any fight between them would be a close-run thing, Thor would inevitably win. Thor is the son of Odin, an advantage in any situation.

The winner in a contest between Marvel’s Doctor Strange and DC’s Doctor Fate would clearly be Doctor Strange. Strange uses Eldritch Magic to convert energy into shields and weapons of great power. He can also use this energy to weave potent spells.

Doctor Fate would be vulnerable to Strange for two reasons. First, Fate’s magical abilities don’t seem to be as powerful. This is, of course, a significant disadvantage, but there is another. Fate is the human host of the magical entity Nebu. Nebu has used other humans as vehicles before, but the relationship is never a comfortable one—indeed, some of the humans have gone insane because of Nabu’s presence.

Doctor Strange would be able to shape this weakness to his own ends and emerge victorious from any direct encounter.

7 The Hulk vs. Solomon Grundy

When the creative teams at Marvel and DC are thinking up new superheroes, Robert Louis Stevenson’s story of Doctor Jekyll and Mister Hyde is often the inspiration. The transition from one character to another is common in superheroes, but Marvel’s Hulk takes this to the next level.

Various characters in the DC roster are similar to Hulk, and Solomon Grundy is one. Grundy’s character has changed over the years—not surprising as he is a reanimated corpse who, having died once, can’t die again. Being indestructible and immortal should mean that Hulk couldn’t defeat Grundy. Both characters are huge, strong, and have plenty of energy, so they should be evenly matched. But Grundy is a villain, and Hulk fights on the side of the right.

Grundy is a vicious beast in most of his incarnations and often reacts to events instinctively. Here is where Hulk has the advantage. He can (although you might believe that it’s a matter of degree) outthink Grundy. He can’t destroy him, but he would win a one-off showdown.

First, Glory outranks America and is, if possible, even more patriotic. Captain America’s patriotism is tempered by his rationality; he is a true hero capable of making quick decisions under pressure. General Glory has no judgment at all. His patriotism blinds him to any shades of gray.

Captain America’s cooler head would give him the best of any direct challenge. Perhaps the DC character with the best chance against the heroic Captain would be Green Lantern.

Green Lantern might also give Spider-Man a run for his money, and Superman and Wonder Woman almost certainly have the edge over the Marvel hero. There is really no direct equivalent to Spider-Man in DC’s universe, although Tarantula would seem to be an obvious candidate.

Tarantula has been the name of more than one hero in the DC universe. The original was a writer named John Law who wanted to be a superhero. He developed skills that make him an obvious equivalent of Spider-Man. An equivalent, yes, but Law’s Tarantula would never defeat Marvel’s friendly neighborhood superhero.

The reason is that Tarantula is not a superhero at all. He is an ordinary man with acrobatic and hand-to-hand fighting skills, but he can never be superhuman. An average person would require suction cups to climb walls and hang from ceilings. His spider-like abilities are artificial. He could never triumph over the real thing.

4 The Fantastic Four vs. Superman

A dose of cosmic radiation altered the DNA of the humans who would form the Fantastic Four. Mister Fantastic, the Invisible Woman, the Human Torch, and the Thing made up the original group. DC didn’t directly copy the idea, but in one of The Adventures of Superman (466) issues, Superman battled a group of four astronauts who had received a dose of radiation and gained powers as a result. This was clearly setting up a Fantastic Four lookalike to grapple with Superman. Superman won.

Clearly, DC believes that Superman is more than a match for anyone Marvel can muster. But the range of abilities that the Fantastic Four have, and their teamwork, would make for a strong challenge to most DC characters.

Black Panther has a lot of strong points that make him a fearsome opponent. Highly intelligent and strong, he is a master of weaponry. He has the guile and wit to better most of DC’s superheroes. But he might struggle against heavyweights such as Wonder Woman and Superman.

Black Panther took his name when he inherited the throne of Wakanda—a country that valued its seclusion and independence. He gained his extra powers from a mysterious herb granting him superhuman abilities. He met the Fantastic Four and decided to leave his country and use his abilities for the good of all humanity.

In the DC universe, the obvious equivalent of Black Panther would be Red Lion. The two characters are very similar indeed. Perhaps this is not surprising as one of the creators of Red Lion—Christopher Priest—had worked on Black Panther while at Marvel. Black Panther is a more well-rounded character; his skills and battle prowess wouldn’t allow him to be bested by his DC twin.

Doom differs from our other examples because he is a villain who first appeared in a Fantastic Four tale in 1962. A similar character appears in the DC universe—Black Adam.

Any confrontation between the two would probably result in Doom coming out on top. Both have great power, but, in the end, Doom’s power has a longer reach than his rival’s.

Interestingly, Marvel and DC brought Doctor Doom up against Superman in 1981 in Superman and Spider-Man. I won’t ruin the story for you if you haven’t read it. Enough to say that Superman has his work cut out for him.

It’s fair to say that, as Doctor Doom offered such a challenge to Superman, he wouldn’t have too much trouble with most of DC’s lesser heroes.

1 Guardians of the Galaxy vs. United Order

The Guardians of the Galaxy first came together in 2008; the original line-up was Drax the Destroyer, Gamora, Phyla-Vell, Groot, Adam Warlock, and Rocket Racoon. Fans immediately took to the idea, and the Guardians’ popularity grew. The first movie that starred the heroes came out in 2014 and was the highest-grossing film in its genre that year.

My money would be on the Guardians because the team includes Rocket Racoon. Rocket is a master of war. But he is much more than that. He has imagination and the potential to be the Napoleon of the spaceways. If it came to the crunch, Rocket would outthink the United Order.