10 Most Convincing Duet Performances by Non-Couples

There have been so many convincing duets between various entertainers over the years. Of course, some duets are notable because of the vocal harmony or because the entertainers are such big stars. Still, some platonic pairs are so good at performing love songs on stage together that it’s easy to imagine they are a real couple. These are 10 of the most convincing duet performances by singers who were not romantically involved… as far as we know.

In addition to being a popular duo who collaborated on many hit songs during the 1970s and early ’80s, country music artists Loretta Lynn and Conway Twitty had so much chemistry and such a friendly rapport that a lot of fans believed there was an off-stage romance between them. However, Lynn and Twitty were both married to other people at the time.

In the PBS documentary Loretta Lynn: Still a Mountain Girl, Lynn set the record straight, denying these rumors while professing her love for Twitty as a friend. The two actually became more physically demonstrative with age, as we see in their version of “Louisiana Woman, Mississippi Man” on Lynn’s 1985 TV special. However, sparks were particularly noticeable in a televised duet of “Easy Lovin’” in 1972, during which they projected strong vibes despite the somewhat restrained performance.[1]

While some would say that the interaction was too stagy and slick between Rihanna and Ne-Yo in their performance “Hate That I Love You” at the 2007 American Music Awards, the singers pulled it off very well. Rihanna, appropriately dressed in a flapper-inspired costume, has a teasingly seductive manner that almost overshadows the song itself. In many of these great duets, one singer plays it noticeably cooler than the other. In this case, Ne-Yo is the more reserved entertainer, although his reactions are very good, and he is very much into the performance.

In discussing his collaborations with Rihanna, Ne-Yo said, “When I met her, she was young still… I met her when she was still a kid.” He admitted to feeling uncomfortable when his friends made remarks about her sex appeal. However, we would never guess it from watching this performance.[2]

8 “You Don’t Bring Me Flowers”

The bittersweet 1978 ballad “You Don’t Bring Me Flowers” by Barbra Streisand and Neil Diamond was not originally intended to be a duet. The singers had each recorded their own version of the song, but according to a Rolling Stone article in 1978, a “scorned, just-divorced radio jockey from Louisville, Kentucky, spliced them together as a spiteful missive to his ex-wife.”

The popularity of the track prompted the record label to have Diamond and Streisand record an actual duet of the song. As beautiful as the audio recording is, their performance of “You Don’t Bring Me Flowers” at the 1980 Grammy Awards is especially memorable and poignant. At one point, shrieks of excitement can be heard coming from the crowd when Streisand tenderly caresses Diamond’s cheek. The two multi-talented entertainers put their respective acting skills to good use in making the audience feel that they were a real couple, heartbroken over their once lovely but now failing relationship.[3]

It should come as no surprise that the sweepingly beautiful ballad “Endless Love” from the soundtrack of the 1981 coming-of-age film by the same name has been covered a number of times, including the popular Luther Vandross-Mariah Carey version in the early 1990s. “Endless Love” was originally recorded as a duet by Lionel Richie (who wrote the song) and Diana Ross. The two did a memorable rendition at the 1982 Academy Awards, which features a boldly flirtatious performance by Richie while Ross remains a little coy. However, the singers’ overall rapport is very warm, and they could have easily been taken for a real couple.[4]

Singer and actress Gloria Loring, who is probably best known for her role as Liz Chandler on the soap opera Days of Our Lives in the 1980s, did a very memorable duet on an episode of the daytime series, with Carl Anderson (Jesus Christ Superstar), which went over really big with viewers. The ballad they performed together, “Friends and Lovers,” is about a pair of good friends who are contemplating a romantic involvement despite the possible risk to their cherished friendship. The chummy, easy togetherness, along with Loring’s saucy performance, convincingly project the image of friends who feel a strong attraction toward one another. The song was #2 on the Hot 100 chart for two weeks.[5]

Among crooner Bobby Darin’s many talents was his skill for romantic duets, particularly with female singers who were guests on his television show in the early 1970s. Though he was best known as a singer/songwriter/musician who recorded a number of hits in the 1950s and ’60s, like “Dream Lover” and “18 Yellow Roses,” Darin was also a noted actor who earned an Oscar nomination for his role in the 1964 dramedy Captain Newman M.D.” So it makes sense that Darin was adept at performing sensitive, sometimes intense duets.

Darin’s cover of the stirring Motown song “Ain’t No Mountain High Enough” with guest star Freda Payne (“Band of Gold”) on an episode of his TV show in 1973 is especially powerful. It helps that he had chemistry with Payne, who was warm and responsive in her performance. But the pair was also very effective in creating a sense of intimacy. Their body language is a big part of this. Sitting close together, they stare into each other’s eyes throughout the up-tempo ballad. Toward the end of the song, their lips are so close that it appears they are singing into each other’s mouths, which, of course, leads to a kiss at the conclusion of the number.[6]

4 “I Left My Heart in San Francisco”/”Night and Day” 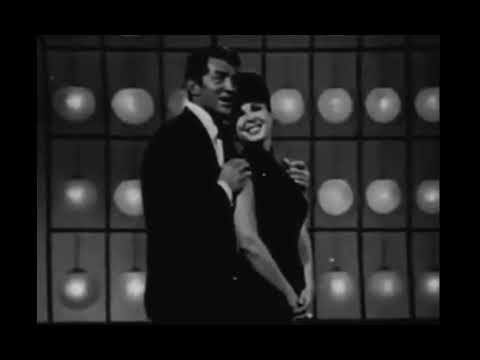 Dean Martin was another sexy singer/actor who did many playful and even sultry duets with the lady singers who guest starred on his popular TV variety series. Often these routines were more like comedy sketches. The singing would be interrupted by risqué comments, profusive giggling, or Martin hamming things up with his farcically amorous act. Other times Martin’s real and potent sex appeal showed through, such as the duet medley of the songs “I Left My Heart in San Francisco” and “Night and Day” with Broadway star Eydie Gormé on the 1964 TV special Your All-Time Favorite Songs.

This number has a more grown-up feel to it, which suits both Gormé and the sophisticated selection of music. It’s obvious that we are watching two smooth professionals who know exactly what they are doing in this carefully choreographed depiction of a romantic couple affectionately serenading each other.[7]

3 “Islands in the Stream”

One of the best-loved and most iconic duets of all time is “Islands in the Stream” by Kenny Rogers and Dolly Parton. Of course, the country singers recorded other popular songs together, such as Parton’s favorite “You Can’t Make Old Friends.” But there was something special about their first duet, the 1983 hit “Islands in the Stream”—maybe because it was written by the Bee Gees for soul singer Marvin Gaye and was not meant to be a duet.

Rogers, who was not anxious to record the song, suggested bringing in Dolly Parton, which made all the difference in the world. The two became good friends and frequent collaborators.

Rogers, who passed away in 2020, explained in a 2017 interview he and Parton did with Today why they never dated: “I’m a believer that tension is better if you keep it than if you satisfy it,” Rogers said. “And then secondly, she said no to me.”

Parton said they didn’t have a romantic relationship because they were too much like siblings.

Parton and Rogers performed “Islands in the Stream” many times over the years, but one of the best and most convincing was at the 17th Annual Country Music Association Awards in 1983. This flirtatious, enthusiastic, high, energy rendition really shows off the duo’s chemistry and rapport.[8]

Obviously, there’s a big difference between duets sung in musicals, through specific characters within the context of a storyline, versus a stand-alone duet. It isn’t easy to compare the two. However, occasionally there will be a theatrical duet that is so powerful that it is in a class of its own. One such example is “Some Enchanted Evening,” as performed by famed opera baritone Ezio Pinza and iconic singer/actress Mary Martin in the original Broadway production of Rodgers and Hammerstein’s South Pacific (1949).

One of the most striking things about this duet is the blending of Martin’s clear, soft vocals with Pinza’s deep, rich voice. A performance broadcast on a TV special in the mid-1950s captured the magic these two legendary entertainers created together with their rendition of the classic sentimental ballad about love at first sight. The soaring emotion expressed in this duet, which is all at once tender and passionate, combined with Martin and Pinza’s natural rapport, makes them very convincing in their portrayal of a couple blissfully in love.[9]

There was a lot of buzz following the Bradley Cooper-Lady Gaga performance of “Shallow” (co-written by Gaga) on the 2019 Oscar telecast. Rumors had already been circulating about a possible romantic involvement between the two when they co-starred in the 2018 remake of A Star Is Born. This passionate version of the hauntingly romantic ballad from the film only encouraged speculation about Gaga and Cooper, who were both in relationships with other people at the time.

Besides the sensual feel of the duet, the pair seems very comfortable together, especially when Cooper joins Gaga on the piano bench, and they end the song with their faces together and eyes closed.

Cooper later denied he and Gaga were anything more than friends. He actually planned for the number to unfold like a scene from the film. In an interview with The Hollywood Reporter, Cooper explained, “Just from a personal standpoint, it reduces the anxiety level.” He said, “They kind of fall in love in that scene in the film. It’s that explosive moment that happens to happen to them on a stage in front of thousands of people… It would have been so weird if we were both on stools facing the audience.”[10]

Chrissy Teigen: I Didn’t Have A Miscarriage, I Had An Abortion 'To Save My Life'