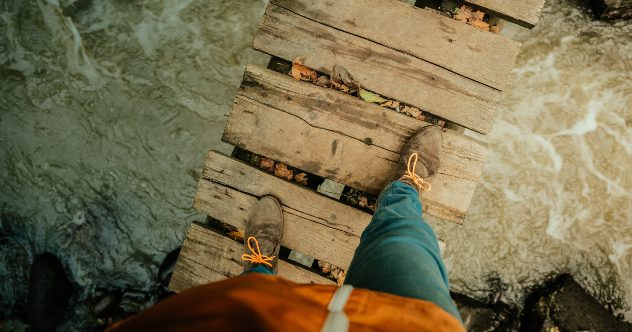 Hiking is great exercise that gets you outside exploring new areas! While hiking is generally considered a pretty peaceful, tame hobby, some people like to take it to extremes. From the Philippines to Guatemala, Egypt to Alaska, join me on an adventure through the most dangerous hikes in the world.

There are easy, “walk in the park” type hikes worldwide, but we aren’t focused on that type of hike today (because what fun would that be?). Instead, we are looking around the world at some especially extreme trails.

All the trails below have beautiful views, sure. But they are also treacherous and can sometimes be fatal. All the hikes on our list would take serious guts even to attempt. Make sure you have proper hiking boots, hydration, and a good compass along the way as we navigate the 10 most dangerous hikes in the world!

Related: 10 Misconceptions About the ‘Most Dangerous’ Travel Destinations

When starting on the Angel’s Landing trail, you may think it is not a big deal; most of the trail is relatively harmless. Once you reach the last ascent, you must climb up a steep staircase to reach the top. This part of the trail is so narrow that hikers must go one at a time. When hikers pass one another in this area, it is extremely hazardous. Beyond the stone staircase, hikers must be supported by chains to climb higher (reaching a peak of more than 5,700 feet or 1,737 meters). Yikes!

I’ll settle for watching others hike this trail on YouTube, but the danger does not make this half-mile hike any less popular.

The seaside portions take hikers along the coast. During this section, hikers may face problems with tides, waves, and tumultuous weather. Vancouver Island is known for having some of the most inclement weather in the world! The other segments of the West Coast Trail take backpackers through the woods. Some hazards you may face here include:

Next on our list is a trail with a clear and present danger. Mount Pinatubo is not just a large mountain; it is actually a volcano. It was considered dormant and did not erupt for more than 400 years. However, in 1991, Mount Pinatubo erupted, causing the deaths of more than 800 people. It erupted again in 1992, this time killing more than 70.

Despite this obvious danger, many people hike this trail every year. The trail itself is not the most difficult on our list; instead, it may be one of the easiest. In fact, a seasoned hiker may be able to finish the hike in an hour or less. Of course, this doesn’t account for the fear!

While the view of the volcano and nearby crater lake is gorgeous, the dangers of an active volcano make this hike one of the most dangerous in the world.

Denali is another name for Mount McKinley. It is the highest peak in North America, at more than 20,000 feet 6,096 meters. It is also in one of the coldest parts of North America, Alaska. This makes ascending the Denali one of the most difficult and dangerous hikes in the world. The changes in elevation cause a huge temperature variation, getting as low as 50°F (10°C) and warming up to “as hot as an oven,” according to “Deadly Ascent: The Dangers of Denali National Park’s Mt. McKinley”.

To complete a climb like this, explorers need ideal conditions, proper training, and the best gear available. Without all three, the likelihood of injury or death is very high. Denali or Mount McKinley is certainly not for the faint of heart.

Who knew that so many people wanted to hike up volcanoes? Our next hike, the Pacaya Volcano hike in Guatemala, is a volcano that is clearly active and has been since 1965. Eruptions happen with some regularity. One of the biggest eruptions happened in 2010 when three people were killed. In 2013, the volcano erupted again, though no casualties were reported.

Even when the Pacaya Volcano is not actively erupting, it can be very dangerous. Rocks, ash, and dangerous gases continue to come out of the volcano, even when it is relatively dormant. This also makes the ground and footing along the climb dangerous as it is constantly changing.

Guatemala’s National Park Service has closed the peak to the public. However, adventurers are still finding ways to access the trail, taking their lives into their own hands.

Colorado is known as the “Mile High State” for a good reason. It is positively full of large mountains, making it a hiker’s paradise. Of the many challenging peaks throughout the state, Capitol Peak is considered the most dangerous and difficult of all. The mountain is considered a “14er”, meaning it is over 14,000 feet (4,267 meters) above sea level, making it the 52nd-highest peak in North America.

For those who want to attempt this hike, you must be well prepared. This means being in good physical shape, having appropriate gear, and planning ahead for eventualities. The most dangerous part of the Capitol Peak trail has an ominous name, “The Knife’s Edge.” In this area, hikers cover a rocky ridgeline with steep drops on both sides. Before crossing this area, it is absolutely essential to check the weather and make sure that it is a good time to cross. Because it is narrow, and the rock may be loose, many hikers have fallen to their deaths here.

Our next dangerous trail is in Northern Africa, specifically Egypt. The Red Sea Mountain Trail (RSMT) was only officially started in 2019. It is an extremely long trail near Hurghada, Egypt, and is 105 miles. Seasoned hikers should expect the hike to take at least ten days and as long as two weeks.

The Red Sea Mountain Trail can be complicated to navigate. Due to many tourists getting lost along the trail, you must now have a Bedouin guide. According to the RSMT website, Bedouin guides act as teachers, translators, and historians along the route.

Even with a guide, the trail is dangerous. It covers a remote desert wilderness, so hikers need to be well prepared, particularly with plenty of water. Some explorers request camels (and even Jeeps) to traverse this dangerous hike.

Canyonlands National Park is one of Utah’s “Mighty Five” National Parks. It is a popular park that contains a variety of trails. Experienced hikers, novices, and even children can find a hike that suits their needs. However, there is an extremely remote section of the park that is not well trafficked. This section is referred to as “the Maze.”

The Maze is in a difficult-to-reach area, and as the name implies, it is also tricky to navigate. The Maze in Canyonland parks is dangerous for a few reasons. First, it is easy to get turned around in this rocky labyrinth. Because it is so remote, finding help in the Maze is unlikely. Another danger is flash floods. Due to the rocky nature of the Maze, sudden rain storms can cause slippery surfaces and quick flooding. The third danger is rockfalls and rockslides. At any point, rocks can dislodge, causing serious consequences.

The views must be gorgeous because the Maze attracts thousands of visitors annually.

On the island of Guadeloupe in the Caribbean lies another active volcano. Standing at 4,813 feet (1,467 meters), La Soufriere Volcano is a major geological feature of the small island and can be seen for miles on a clear day. It is the centerpiece of the National Park of Guadeloupe.

Tourists (and locals) enjoy a hike up the volcano, but it is not without risk. Though it has only erupted five times in recorded history, the volcano emits steam on a near-constant basis. The trail is one of the shorter ones on our list, taking an average hiker two or three hours.

With beautiful hot springs, lovely views, and a relatively easy hike, it is easy to see why this hike is popular. Hiking along an active volcano’s rim is dangerous, so I will leave it to the thrill seekers!

The last trail on our list is so dangerous that it can’t be contained in one country! The Chilkoot Trail is a 33-mile (63-kilometer) hike that starts in Alaska and ends in British Columbia, Canada. There are several factors that make this trail one of the most dangerous on the planet.

The first is the elevation; this is far from an easy hike. Hikers must ascend the “Golden Stairs,” which are not made of gold but snow. Another danger is the presence of bears; both brown bears and black bears have been known to attack hikers.

Dangerous enough for you? If not, consider the avalanche that occurred on the trail in 1898. Reportedly, there were more than 60 casualties. If you are willing to brave bears, avalanches, and a staircase of snow, this may be the hike for you, but I wouldn’t recommend it!

10 People Who Saved a Life with Inconceivable Strength