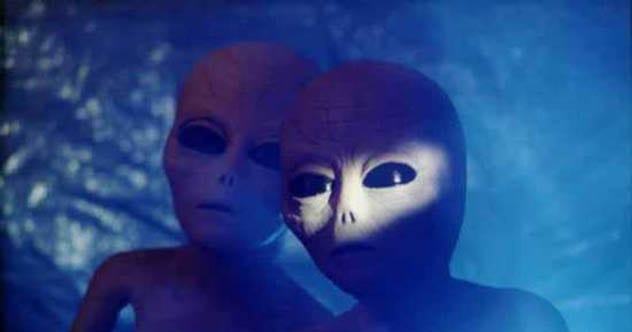 There’s really no way to handle a UFO or alien encounter. Most of us probably never have and never will experience such an event. And when it comes to bizarre encounters, there are not too many that can compare to it. Obviously, the Roswell crash is at the top. Bigfoot? Not so much. Megalodon? No way.

With so many stories going around, it’s hard to differentiate between what’s real and a hoax. Stories of being medically experimented on, being tied down on an alien craft, or being taken without knowledge are some of the encounters we hear about often. The ten women listed below did just that. Except, their encounters didn’t turn out bad. Their encounters were frightening, for sure, but they seemed to end rather… calmly. Weird. It was almost like having a nightmare—scary while you’re in it, but it’s fine when you wake up. Whether you believe it or not, these encounters are their truth.

An author, reporter, and co-host on SkywatchTV, geopolitics enthusiast, and Christian podcaster, Gilbert takes on many roles daily. On the Jim Bakker show, she discussed her alien encounter. What makes Sharon’s story interesting is that it is the opposite of the typical alien encounter. Most alien encounters start with witnessing the spacecraft before seeing the aliens. However, there were no indications or warnings for Sharon. Her encounter began as a frightening confrontation.

While lying in bed, an alien visited her in the form of her husband. Her husband was lying in bed and something disguised as him lifted out of his body. She insisted the creature wanted to have sex with her. The communication between the two was internal. Before she pulled the mask off, she told the creature, “Jesus is real.” She revealed that it looked like a gargoyle with reptilian features.

However, Gilbert never revealed how the creature left the room. If it wasn’t worth mentioning, it probably wasn’t an issue. A lot of responses to her encounter were negative once it circulated on the internet. But Sharon was unbothered by what people thought.[1]

An educator, entrepreneur, and south Florida community activist, Bettina Rodriguez Aguilera has always connected with a diverse group of people. She even ran for the Republican primary election to represent Florida’s 27th congressional district. With so much support from the people, some questioned if the interview she gave in 2009 about an alien encounter risked her election.

Regardless, Rodriguez Aguilera never regretted or changed what occurred during the encounter. Rodriguez Aguilera claimed that at seven years old, she was taken aboard a round spaceship. She recalled interacting with tall blonde aliens. Two women and a man. She never mentioned any aggression from the aliens or being experimented on. Instead, the aliens provided her with information. She mentioned that they explained to her that “the center of energy is in Africa” and “God is a universal energy, not a person.”[2]

“I hope I’m not the UFO, Tic Tac person for the rest of my life. This is not what I envisioned for myself,” Lieutenant Commander Alex Dietrich was quoted saying after talking about her UFO encounter on 60 Minutes. In November 2004, Dietrich observed a UFO hovering over the ocean while training with colleagues. The UFO moved at speeds beyond anything she had seen before.

She never claimed to see an alien or gave any indication of what she thought it was. Just simply an unidentified Tic-Tac-shaped object. Nothing less. Nothing more. Dietrich never mentioned having an interest in UFOs and didn’t entertain the idea or thought of it being more than what she saw. For the disbelievers, after hearing about a retired pilot’s UFO encounter, do you believe it even more?[3]

Angelia Schultz (who now goes by the name Añjali) ran as a Democrat candidate for South Dakota Senate and Secretary of State in 2014. Years later, she mentioned that she was a retired defense intelligence official. On August 17, 2021, Angelia talked about her alien encounter at a press conference in front of the Lincoln Memorial in Washington, DC.

She mentioned meeting a couple at a Southern California coffee shop who eventually showed her the location of an alien base. She didn’t reveal exactly where in the Mojave Desert she went in January 2010. But she said that the man she met had excavated a tunnel on the side of a mountain. She said a bright light guided them to the secret alien base. She remembered seeing aliens with lavender skin and one that looked like a praying mantis. The conversations with the aliens were through telepathy.

During her press conference, she stated that she planned to go back with other individuals. As of today, there is still no confirmation if she went back to the base.[4]

Dale Snipes, the author of 78 Years of UFOs, has experienced alien encounters since she was a child. The most terrifying encounter was at 3 am when an alien tried to take her against her will. On the show UFO Witness, she told investigators that she woke up to a strange sound coming from the kitchen. Soon after, an alien appeared in her room and communicated with her telepathically.

She mentioned that the alien—believed to be a Star Person—wanted to show her something and asked if she would come with it. It wasn’t clear what the alien intentions were. During the encounter, she recalled trying to wake her husband up many times. She said even when she dug her nails into his arm, he still didn’t respond. Eventually, the alien did leave. The next morning, her husband showed his arm covered with bloody scratches.[5]

Full of emotions and terror, a UFO encounter at Alaska Pacific University left Shel Marie with thirty years of traumatic memory loss. On the Aliens in Alaska show, Shel allowed cameras inside her hypnotherapy session.

During the session, Shel starts by saying she went outside to smoke a cigarette. She remembers randomly looking up at the sky and noticing a large black object covered with lights and an unfamiliar language written on the craft. She mentioned she would have never known it was above her if she hadn’t looked up.[6]

One too many times, Geraldine Orozco would become pregnant and then have a miscarriage weeks later. Each time there was never a fetus found. The cause remained a mystery even when seeking medical advice. That was until she was taken into an alien spacecraft in October 2013.

She recalled her body feeling paralyzed as she was surrounded by tall grey beings. In the craft, she mentioned seeing her children. She remembers noticing that they were part human mutated with alien DNA. Ever since the incident, she started a support group for other women who experienced having their babies stolen from the womb for experiments.[7]

Most things are kept quiet at Jicarilla Apache Reservation, New Mexico. That was until Geraldine Julian talked about her encounter on UFO Witness. Rather than referring to them as “extraterrestrials” or “aliens,” Geri referred to them as “disturbed people.”

The first encounter she remembered was when she was sitting outside and saw a craft fly from behind a mountain. She said the craft descended from the sky to approach where she was sitting. Later that night, two small people tried to force her out of bed. She recalled she couldn’t scream or do anything. Eventually, “the disturbed people” left her alone.[8]

Jane Nelms is no stranger to having alien encounters. She told her encounters to KLTV 7 News. In 1973, she mentioned being abducted by five aliens. Then, in the 1980s, she mentioned one day being pregnant, and after a horrible night, she woke up no longer pregnant.

Years later, she and a UFO group gathered in Winnsboro, Texas. She remembered seeing a bright white light glaring through every window in the house. She also heard there was a grey alien outside. By the time she went outside to investigate further, she had heard branches snapping and noise coming from the ship ascending into the air.[9]

Her first alien encounter started in November 2020. She mentioned seeing a couple of crafts flying over the neighborhood. The more time she spent outside, the more frequent the encounters became. She stated seeing different aliens. The ones she remembered seeing the most had a blue complexion. She saw some with glowing skin and blonde hair. Rather than having physical encounters, the aliens sent many images of themselves through telepathy.[10]

Ten Awful Events That Befell the Cursed Cast of ‘Grease’