10 Photographs That Will Trigger the Megalophobic in You

Does the thought of looking up at a 100-story building terrify you? Do you find any excuse possible to avoid joining your friends as they marvel at the sight of the massive cruise ship that just docked in the local harbor? Does the very idea of seeing an elephant in person make you quake in your boots?
Then you might just be megalophobic—someone who experiences intense fear of large objects. And also, you likely wouldn’t want to look at the following photographs.

Related: 10 Insane Phobias That You Won’t Believe Are Real 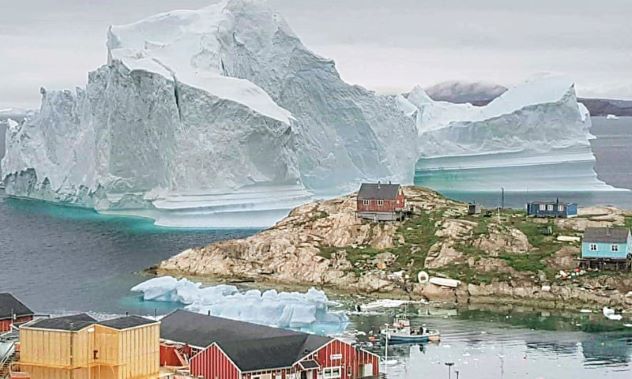 If you’re a fan of winter and freezing weather, then moving to Greenland might just be the best thing for you. Considering your neighbor could turn out to be an iceberg.

In the village of Innaarsuit, a towering iceberg moved in and stalled just behind a series of small houses. It made for stunning photographs, but for those who cannot stand looking at massive objects, it will cause more than a few nervous butterflies in the stomach. In 2018, residents living closest to the water were evacuated for fear that the iceberg would break up and cause a mini-tidal wave.

Fortunately, the iceberg moved around 600 meters north of the village a few days later, which meant that the residents would be protected by a wall of rock should any chunks of ice split off and drop into the ocean.[1] 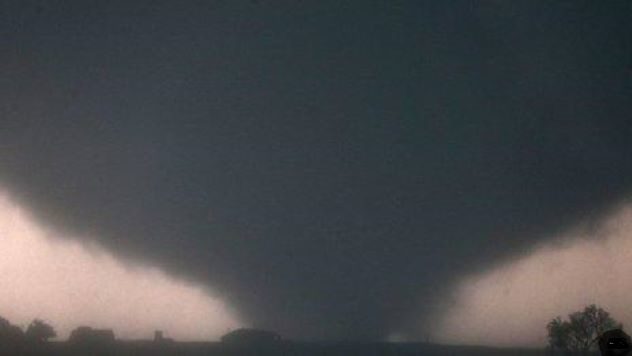 Oklahoma is no stranger to tornadoes, but on the evening of May 31, 2013, residents in the rural area of Central Oklahoma experienced something truly terrifying. The widest tornado ever recorded touched down just after 6pm, around 8.3 miles (13.4 kilometers) west-southwest of El Reno. It remained mostly over open fields and terrain and eventually reached the highest observed wind speeds on Earth—up to 302 mph (486 kph). With a width of 2.6 miles (4.2 kilometers), this F-5 tornado was the second of its size in the area over the span of 11 days.

This monster of a tornado killed four storm chasers, and their deaths were also the first in the long history of storm chasing. Overall, eight people died, and 151 were injured. Panicking Oklahoma residents took to the roads, trying to outdrive the twister, which was exactly the opposite of recommended actions during a tornado. Fortunately, the tornado didn’t pass over the highly congested freeways—if it had, more than 500 people could have been killed. Watch the stormchaser’s footage.[1]

8 Biggest Animal on the Planet 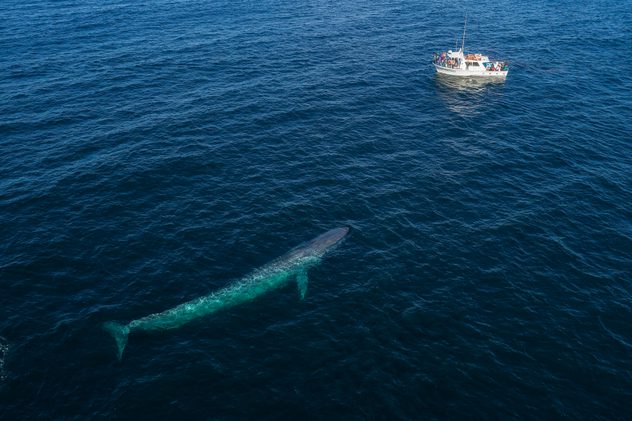 Blue whales are some of the most intelligent animals on Earth and also the biggest, weighing in at around 150 tons and growing to a length of almost 100 feet (30 meters). Because of excessive hunting, a global ban was instituted on commercial whaling in 1986. Blue whales remain an endangered species today, with their numbers believed to be no more than 25,000 worldwide.

They are rarely seen, but when a sighting does occur, it’s enough to take your breath away. In August 2020, a blue whale was spotted off the coast of Sydney, Australia, in what was believed to be only the third sighting in 100 years. The resulting photographs are astonishing.[3] 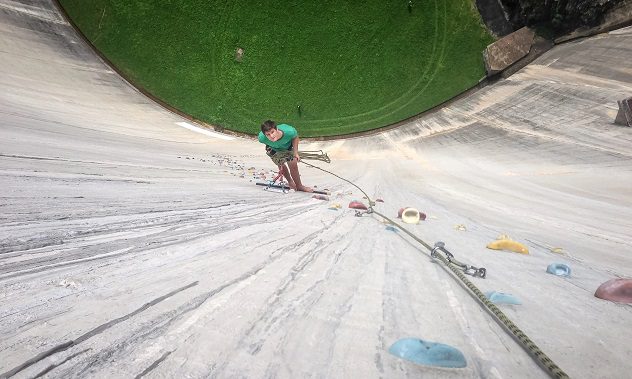 The Lago di Luzzone reservoir in Ticino, Switzerland, sits at a height of 1,606 meters (5,269 feet) above sea level, and the arch dam Luzzone was completed in 1963. In the late ’90s, the height was increased by 17 meters (55.6 feet). However, the biggest attraction here is one of the walls, named Diga di Luzzone, which features the world’s highest artificial climbing wall. More than 650 holds and bolts have been installed over a distance of 165 meters (541 feet). Check out the dizzying video.

The concave wall changes from thick concrete slabs to a straight vertical, and the sheer height of it is enough to give anyone heart palpitations just by looking at it. And if you’re megalophobic and also afraid of heights, you should give this one a skip altogether.[4] 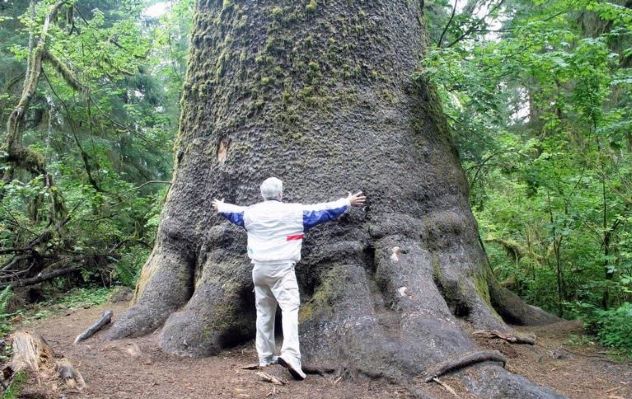 A giant Sitka spruce, known as the Raven’s Tower, is situated somewhere in the Prairie Creek Redwoods State Park in California. This 317-foot (96.7-meter) coniferous evergreen tree was discovered and measured in 2001, but its exact location is being kept under wraps to protect it from vandals. It is thought that the tree is still growing and will be even taller at its next measuring. Prairie Creek, in fact, exists for the purpose of protecting these trees, and it has been doing a wonderful job so far. Here you will also find more massive trees, including the Cathedral tree and the Corkscrew Redwood.

Since the exact location of the Raven’s Tower is unknown, there are no published photographs of it. However, this video of a Sitka spruce will give you an idea of its height.[1] 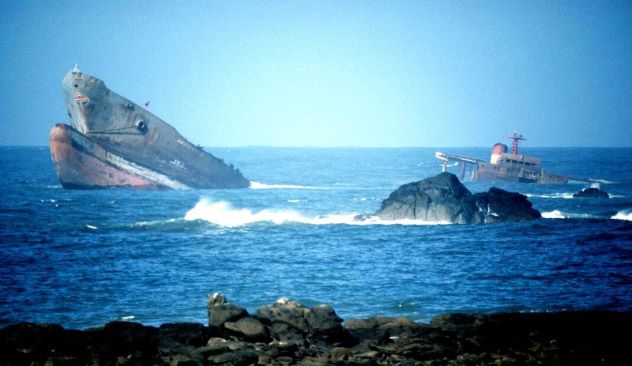 On March 16, 1978, the tanker Amoco Cadiz suffered a steering gear failure and ran aground off the coast of Brittany. She split in three and started sinking. It took only two weeks for 223,000 tons of oil and 4,000 tons of bunker fuel to leak into the ocean. In one month, the oil and fuel had contaminated 198 miles (320 kilometers) of coastline and decimated millions of ocean species.

More than forty years later, the wreck is slowly sinking into the seabed, a rusting reminder of one of the biggest maritime disasters in history. Today, viewed from the right angle, the wreck resembles a huge metal shark with a beady eye. It is also a magnet for divers who love exploring the remains of the tanker whenever the weather allows.[6] 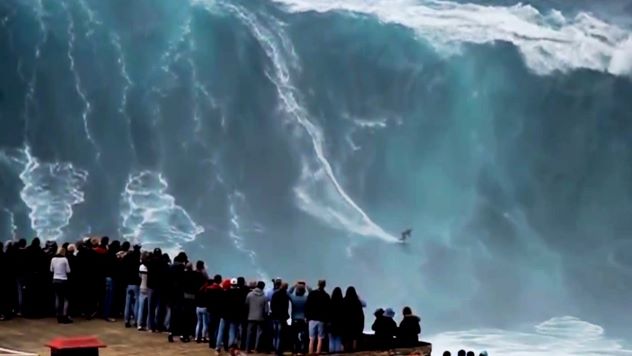 If you’re not a fan of big waves, then visiting the seaside town of Nazaré, Portugal, will definitely not be on your bucket list. Praia do Norte (North Beach), located in Nazaré, is infamous for the monster waves that form there. They are the biggest surfable waves in the world and are sometimes referred to as the ocean’s Everest.

On October 29, 2020, Portuguese surfer Antonio Laureano was believed to have surfed a 101.4-foot (30.9 meters) wave, and the image of that particular wave was captured by satellite. The spectacular photos were released by NASA earlier this year. For now, though, the “official” record holder is German surfer Sebastian Steudtner, who surfed that same day in October. His wave officially measured 85.95 feet (26.2 meters).

The main factor in the generation of the unbelievably huge waves is the Nazaré North Canyon. This undersea canyon is the largest of its kind in Europe, reaching a depth of 16,000 feet (4,876 meters) and a length of 140 miles (225 kilometers). It is known to be a ripple polarizer, which means waves travel at a much greater speed here with hardly any slow-down as they reach the coast.[7]

3 Tsunami in the Sky 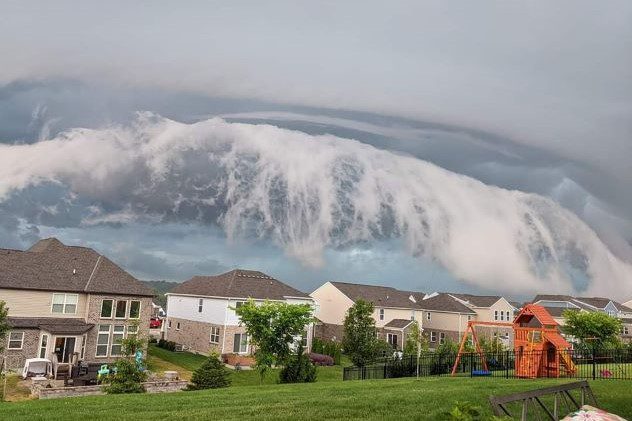 At first glance, this image looks like just another version of a Nazaré wave, doesn’t it?

In June 2022, footage of this terrifying phenomenon started making the rounds on social media and eventually caught the attention of newscasters. The “wave” was, in fact, a massive formation of clouds rolling toward a row of houses in Cincinnati, Ohio. These types of clouds are known as arcus or rolling clouds and have quite the apocalyptic look about them. They form near the edge of thunderstorms, which Ohio experienced a lot of at the time. Several storms in the area led to power outages and property damage.[8]

2 The Edge of England 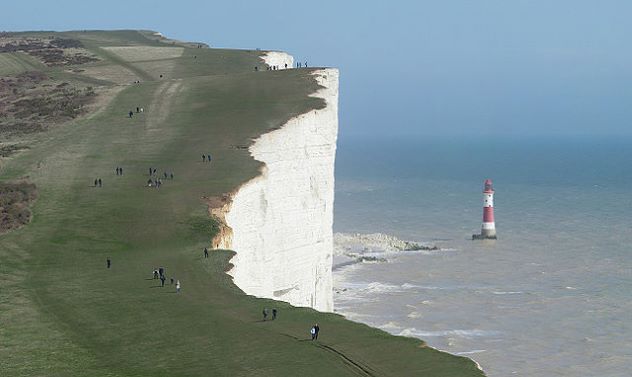 At 531 feet (162 meters), Beachy Head in East Sussex, England, is the highest white chalk headland cliff in the country. Throughout history, this stunning feature has helped guide sailors in the English Channel, but the persistent fog and low clouds here also made it dangerous for sailors at the same time.

Two lighthouses were built at Beachy Head, one during the 1830s and the other in the early 1900s, to try and combat the high number of shipwrecks. The first lighthouse has been decommissioned and functions as a teahouse today. When it’s not freaking people out because of its sheer size, it is used as a TV and film location and can been seen in Harry Potter, Pearl Harbor, Robin Hood: Prince of Thieves, and more.[1] 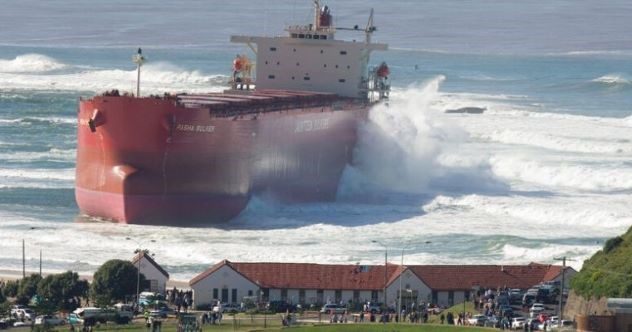 In 2007, the coal ship Pasha Bulker was stranded off Nobby Beach in Newcastle, Australia, during an intense storm that caused flooding, fierce winds, and high waves. The storm killed nine people and caused damage to thousands of homes. Within four hours of the stranding, 22 crew members were rescued.

But it is the photographs from the incident that people remember most about that day. Photographer Murray McKean climbed the Christ Church Cathedral tower to snap the now-infamous photo of the enormous ship looming over the buildings and people in the foreground. If this image doesn’t bring out the megalophobia in you, nothing will.

The ship remained stuck for three weeks before being re-floated and towed to Japan for repairs.[10]

10 Most Successful Infomercials Ever