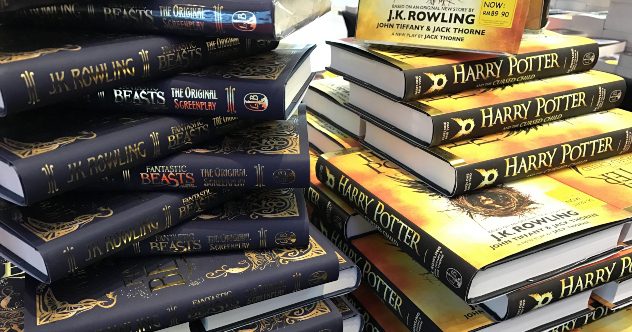 Can we all just agree to disagree? Yes, I have a degree in English, and I took my fair share of Shakespeare classes in college. Who doesn’t love a good Elizabethan tragedy? However, I can’t read about star-crossed lovers and plots of revenge all the time. Sometimes I just need some brain candy. It doesn’t have to be high literature. In fact, I prefer that it isn’t. When it’s time to put my critical thinking skills in neutral, I love a good vampire romance as much as the next hormonal young adult.

While I do enjoy some of the books on this list and others are not my cup of tea, they all have their own fanbase and following, which is more than any one of us can say. With this in mind, here are 10 poorly written books people love.

I confess: I read the fantasy romance novel that everyone was talking about. My mom loved it. My aunt loved it. A few years later, we all went and saw the movie together. Admit it; you did too. We all read the entirety of the series and even picked teams!

But let’s get this straight right off the bat—I would probably sell one of my kidneys (maybe both) to have even a fraction of the financial success that Stephanie Meyer has enjoyed from her books. Still, I don’t know a single person, even among the most devoted fans, who would argue that the epic saga of vampire vs. werewolves could be placed among the classics.

While I may not be a trusted authority on the subject of Ms. Meyer’s writing style, we can rely on the modern-day master of the horror genre to weigh in with his opinion. In a 2009 interview with USA Weekend comparing the Harry Potter series to Twilight, author Stephen King said, “The real difference is that Rowling is a terrific writer and Stephanie Meyer can’t write worth a darn. She’s not very good.”

Ouch! While I’m sure that Stephanie Meyer was none too pleased with Stephen King’s assessment of her work, she was probably crying all the way to the bank.

9 The Dark Tower: The Gunslinger by Stephen King

If we’re going to use Stephen King to pick on Stephanie Meyer, let’s play both sides of the fence here. Nobody can argue that King is a genius and one of the most successful American authors of all time. His novels such as Carrie, Pet Cemetery, The Shining, and It are considered classic horror tales. Not to mention that these have all been made (and some re-made) into incredibly successful movies. Even though I am not a huge fan of such dark tales, I enjoy some of King’s non-horror-themed tales, such as The Green Mile, The Shawshank Redemption, and Stand By Me.

Still, even with almost a half-century of literary success, Mr. King is not immune to a few hiccups here and there. While many people love his Dark Tower series, I find that more people want to love it but actually find it kind of confusing and hard to follow, particularly the first book, The Gunslinger. I have actually heard King fans refer to The Dark Tower: The Gunslinger as boring and say it is hard to get through. People who love the entire series justify that it’s important to get through the first book to lay the groundwork for the following novels.

While die-hard King fans want to find a reason to love the book and series, it seems like a lot of work to force something that just isn’t there for most readers. Stephen King should be praised for trying new things as an author, but I would suggest that most of his fans will be happier sticking to some of his other offerings.

8 Catcher in the Rye by J.D. Salinger

Nobody can argue that Holden Caulfield is one of the most iconic characters in the history of American novels. Love him or hate him, J.D. Salinger’s protagonist certainly leaves an impression on most readers. However, the overall love of the novel (or lack thereof) seems to be almost completely tied to the character. Most people just don’t seem to care that the writing is tedious and the plot is non-existent.

Of course, the poor writing style is likely on purpose as it is written from the point of view of a sixteen-year-old boy who is failing school. Still, if, as a reader, you are bothered by a repetitive, simplistic writing style, this may not be the book for you.

While I’m on a roll of bashing classics of American literature, I might as well continue with how I truly feel about The Great Gatsby. While I admit that I was young when I read it, I can honestly say that I really wanted to like F. Scott Fitzgerald’s famous novel. It’s a staple of high school English classes, and I enjoyed most of the books that my teachers had me read in school.

However, this is just one book that I could not force myself to like. I can enjoy well-written books, even if the story is not my favorite, but there was nothing about The Great Gatsby that drew me to it. If I were alone in this assessment, I would readily admit that it might simply be a quirk of personal taste. The problem is that I have talked to many of my peers and even older friends who read a lot and feel the same way.

Of course, I know some people (English teachers mostly) who love it. Maybe someday I will re-read The Great Gatsby and discover something I missed the first time, but that day is definitely not today.

6 Something Wicked This Way Comes by Ray Bradbury

Ray Bradbury’s Something Wicked This Way Comes was another novel that I heard good things about and really wanted to like. I have an uncle who loved this book, so I decided to read it in October to get into the Halloween mood. The fact that the title comes from a line from a Shakespearean witch in Macbeth intrigued me because I enjoyed my college Shakespeare courses.

I wasn’t a fan from the beginning of the meandering storyline and found it a little hard to follow at times, and then it was too predictable at other times. I stuck with it, though, wanting to know how it ends. Then, of course, the fantastic, corny conclusion left me bewildered. Really?

Even after I finished it, I thought about it for a while, trying to understand why other people had really liked it and trying to appreciate the obvious theme of good versus evil. I can’t say that I have ever gained the appreciation some people have for Bradbury’s novel.

5 The Road by Cormack McCarthy

Ok, so I’ve been wandering in my last few selections in books that are a little on the older side, so I will try to look at something a little more modern with Cormac McCarthy’s The Road. This is a novel that, like most readers, I actually enjoyed, although with some reservations. Since it was very critically acclaimed, I can’t say that I enjoyed it quite as much as many of its reviewers.

The thing that makes The Road hard to read is the writing style and imagery. It is incredibly bleak. McCarthy does this on purpose. It’s a post-apocalyptic world, so we can’t really expect it to be cheerful. But it was so dark that I had to take breaks for a while and force myself to finish the novel. I kept going because the characters of the father and son pulled me in. However, it is not a book that I will ever feel a desire to read again.

4 Life of Pi by Yann Martel

Because it was so well received and critically acclaimed when the book was released, including Yann Martel’s Life of Pi on this list will likely not be popular with many people. In fact, because it was so successful, the hype around the novel convinced readers to like the story more than they may have otherwise. I wanted to like this book, but the story was so far-fetched.

While I realize that the story’s unbelievable aspect played into the novel’s conclusion, it also felt like it dragged on forever. Although the story is one where you want to find out how it ends, the believability issue and the drawn-out action make reading Life of Pi painstaking at certain stretches.

3 The Hobbit by J.R. Tolkien

Since I’m already in the dog house due to some of my other picks, I might as well continue with the trend. I have to include J.R. Tolkien’s beloved tale of The Hobbit. Admittedly, Tolkien’s writing may have been much more groundbreaking in its day.

Fantasy is an entry-level genre for many writers because authors can make anything they want plausible in their worlds. But Tolkien describes scenery for pages at a time without returning to the plot. And yet, a book that is barely more than 300 pages secured three separate movies! So what do I know about taste?

Gone Girl is near the top of my list when considering books that don’t deserve its praise. I don’t remember it being well-written, but I’m willing to concede that might be my bias. This book helped me realize that I can find very little redemption in a fictional story where I do not like a single one of the characters.

I can understand if this happens in non-fiction because the facts are already there, but an author should at least throw in somebody likable if they are creating their own story, right? Reading Gone Girl is like hearing fingernails on a chalkboard as you learn more about each character.

This novel taught me that the same author can create a classic tale in one book and an absolute dud in another.

I was touched by Steinbeck’s novel Of Mice and Men in high school English, so I figured why not read another of his shorter books? To put it simply, Danny and Pilon and their story in Tortilla Flat are nowhere near as interesting as George and Lenny from Of Mice and Men.

Steinbeck wanted to portray a simple way of life, but the book is written so simply that it will put a reader to sleep. If you have insomnia, you may want to try this book.