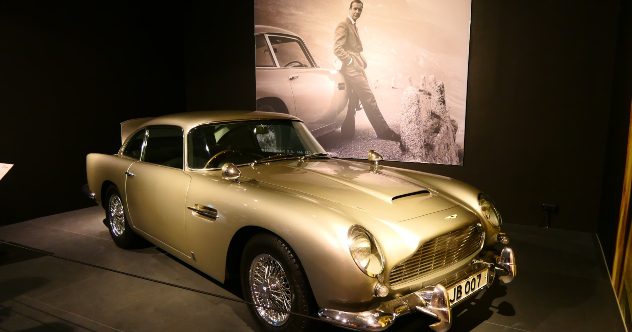 The James Bond movie franchise has given us some great gadgets—some of which we wish we had and others that aren’t so practical but still pretty cool. But real life has given us some neat gadgets too! Sure, we may not have access to a dagger shoe or a mini-rocket cigarette.

Still, innovations in technology and practical applications of survivalist techniques have shown us that Hollywood could take a few pointers from what is already available in real life. Here are ten gadgets that James Bond would want in real life (in no particular order).

The quintessential Bond line “Shaken, not stirred” is the inspiration for our first selection. The Makr Shakr is a robotic arm bartender that eliminates the need for a human bartender. Or, to be less salty about it, all you have to do is sit back and let the robot do its job.

This may not be spy gear, but it definitely plays an important role in Bond’s personal life and vices. However, the outrageous look of an assembly line machine arm bartender makes it seem that it’d be better suited for Archer, who is the perfect parody of Roger Moore’s suave playboy vibes and Pierce Brosnan’s sarcasm and wit.

Daniel Craig, in my opinion, is the darkest version of Bond. He is the silent type who has no problem reminding us that he’s a covert agent first and has no problem killing who he has to kill. He’s also terribly good-looking. That’s why Belty is on this list.

Belty is a self-adjusting belt. It is stylish enough to pass as a regular belt, but why limit the technology behind it to constrict waists and hold up pants? Hear me out. What if Bond could adjust the Belty to self-adjust around a person’s neck? To me, it’s the perfect 2-in-1 tool, like the exploding pen. Forget piano wire—that’s such a mafia tactic anyway. Bond uses a belt to choke his targets.

If you camp, you know how important it is to NOT drink water from lakes, ponds, or streams without boiling it first. Drinking the water straight could result in some pretty nasty medical complications and a ruined camping trip. Fortunately, several solutions don’t require you to boil water, one of which is the LifeStraw.

The LifeStraw is a portable straw that filters water of viruses and bacteria. The company behind it, Vestergaard, has some great sustainability and water equality initiatives, too, so good on them.

In his line of work, Bond visits some far-out places, as seen in No Time to Die, for example. The Lifestraw, then, seems a logical addition to his survivalist tools should he have to travel through harsh and limiting conditions. Stay hydrated, my friends.

Of all the Bonds, Roger Moore probably got the coolest gadgets. He’d be the one we would most likely see shopping around for the next Swiss Army knife of ridiculous all-in-one features. With him in mind, though, it isn’t easy coming up with a real-life gadget that he would want. We could give him a smartwatch, but nothing compares to the Rolex Submariner. We could give him a self-driving car, but, meh—he had the Lotus Esprit coupe. That’s a car and a submarine with a torpedo launcher. So we decided to look for something simpler that could still appeal to Moore’s crazy gadget side. We came up with the Ray-Ban Stories.

These sunglasses made by Ray-Bans compete hard with the Bose Bluetooth sunglasses—and win. The smart glasses are supported by Meta technology and come with a whole host of features. You can take video and photos hands-free (there are two small built-in cameras in the frames). A touch response option allows you to do the same. You can also play and pause music with verbal or touch commands. The glasses also come with a charging case, open-air speakers, Facebook assistant, Wi-Fi and Bluetooth connectivity, iPhone and Android compatibility, and three stylish frame designs with prescription lens options.

The Tile is a portable tracking device intended to keep track of your possessions. The company behind it sells a credit card-sized version of the device, a round, waterproof sticker tracker, or a small tile. Simply keep the Tile with your belongings and sync the device with the iPhone or Android app. Obviously, it can also be left in purses or cars to keep tabs on someone’s whereabouts (but the company would never promote that).

It may not be the most subtle tracking device he’s ever used, but it could prove to be a useful tool for his civilian lifestyle, especially if he tends to misplace his keys or wallet or girlfriends.

The Nuraphone is a set of Bluetooth headphones that send out different frequencies to your ear and measure your ears’ responses to them. It then creates an equalizer profile for you based on these responses. The result is the perfect equalizer setting for your ears only. Additionally, you can take phone calls, adjust the “transparency” of the headphones if you still need to listen to your surroundings, or plug in wires if you don’t want to go wireless.

Bond may never use these things on the job, but we think they’re impressive enough that he wouldn’t mind listening to custom EQ music on his day off.

The max privacy screen protector for iPhone is so private that supposedly unless you’re looking directly at your phone, the screen will appear black. It’s also made out of glass, so its protective capabilities go beyond privacy.

You guys, I really like this one. It’s a knife. But wait, there’s more! It’s a knife that releases enough carbon dioxide to cause a small explosion when you stab something with it. So yes, you can stab something and then make the wound worse by blowing it up with the press of a button on the knife’s bolster. On top of that, the carbon dioxide that causes the explosion is really cold, so it freezes the organs and tissues around it.

The knife was originally intended for divers who encounter predators, like sharks. If you’re underwater and have to use it, the shark will float to the surface before it starts bleeding. The blood will then attract other sharks to the surface so you can keep diving. It makes sense to me!

But you don’t have to be underwater to use it. Land or sea, for close-range combat, this is a pretty neat tool to have and one I’m sure Bond would love to keep handy.

You don’t necessarily want to deck yourself out in jewelry when you’re out in the wilderness. It’s not practical. But this necklace is designed to be functional (and hipster-looking). Wazoo put flint and steel on a pendant, and this surprisingly simple solution to fire starting is wildly successful. The sparks will fly! We’re sure that Bond has plenty of survival skills, not to need flint and steel to start a fire, but he is always prepared for a sticky situation. We figured that he’d bring it along with him to make his life easier. Who actually wants to spend time looking for flint and steel in the middle of nowhere?

Hey, remember when Daniel Craig was poisoned at the casino in Casino Royale“? Not to throw salt on a wound, but you’re 007. Don’t just say, “Hey, thanks for my drink. I’m going to drink it in the same room as my enemy without checking it!” That’s why, as punishment, we’re presenting here the way-too-complicated spiked drink detector!

To use the Drink Detective:

If you want to know exactly what someone put in it, the different colors correspond with different drugs.

The Drink Detective can detect a host of drugs in your drink, including heroin, cocaine, ketamine, ecstasy, morphine, etc. If it’s an amine, the Drink Detective will find it. Now, it wouldn’t have done any good for the digitalis poison in Bond’s drink, but hey, you know, not everyone has access to digitalis—regular bad guys may opt to roofie him instead.