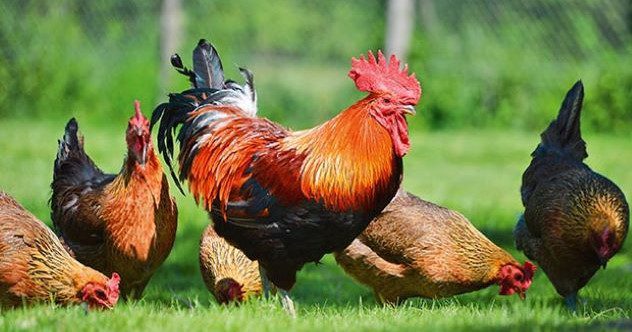 Steven Spielberg’s Jurassic Park came out in 1993 and was an immediate success. On its opening weekend in the United States and Canada, it raked in over $47 million, which went a long way to covering its budget of $60 million.

If the scientists who cloned the dinosaurs had had a more limited amount of cash, they might have looked around the modern world to find the dinosaurs’ closest living relatives—birds. And, as a stand-in for the terrifying T. Rex, they could have used one of its nearest kin—the chicken. Granted, the movie might not have had such an impact, but it would have been accurate.

We tend to think dinosaurs went extinct after a catastrophic event 66 million years ago. This is only true of some of them. We can divide dinosaurs into two groups: avian and non-avian. At least some of the avian dinosaurs survived to evolve into birds, and the non-avians disappeared.

Dinosaurs appeared between 243 and 233 million years ago in the Triassic period. They became the lords of the earth, a position they kept for millions of years before an asteroid smashed into the Yucatan peninsula. All the flesh-eating dinosaurs, such as the T. Rex, belonged to a subgroup known as Theropods. Members of this group had hollow bones and three digits on each foot, just like a chicken.

We have a problem with the term “dinosaur” because it covers a broad range of animals. When someone mentions dinosaurs in conversation, we imagine large vicious brutes such as T. Rex or the placid leaf-eating giant Brachiosaurus, but that is not always the case. So let’s explore ten reasons chickens are dinosaurs.

Related: 10 Fascinating Peeks Into The Daily Lives Of Dinosaurs

Montana is rich in dinosaur fossils, and in 2003, Doctor Jack Horner (the man Doctor Grant was based on in Jurassic Park) found a T. Rex femur bone. A wonderful discovery, but it was too big to fit inside Horner’s helicopter. Taking a practical approach, he broke the femur in half and ferried it to the North Carolina Museum of Natural Sciences.

In North Carolina, the paleontologist, Doctor Mary H. Schweitzer, set to work on the bone. She discovered soft tissue inside. Unfortunately, any DNA had long since degraded, but Doctor Schweitzer could run tests on the proteins in the soft tissue. The analysis showed her that Tyrannosaurus Rex was more closely related to ostriches and chickens than any living reptile.

In our introduction, we said dinosaurs fall into two groups – avian and non-avian. Doctor John M. Rensenberger of the University of Washington and Doctor Mahito Watabe of the Hayashibara Museum of Natural Sciences in Japan did important work that strongly supported this idea.

They looked at the differences in the bone structure of modern mammals and birds. They found that in mammals, including ourselves, the tubes that bring nutrients to bone cells run parallel to each other like train tracks. When they looked at bird bones, they discovered no tube pattern.

Turning their attention to dinosaur fossils, they found two groups. Some dinosaurs—the flesh-eating Theropods—had the same pattern as modern birds like the chicken. Some, the ones that died out, had a pattern like modern mammals.

Fun Fact: The T. Rex had a wishbone, but you would need help in snapping it.

As far as we know, dinosaurs laid eggs just like modern chickens and other birds. The fossil record is incomplete, but scientists are fairly sure that all dinosaurs laid eggs. As we are using T. Rex as our example of a chicken’s ancestor, we should make it clear that, so far, we haven’t discovered a T. Rex nest. But we have found nests of other Theropods. If T. Rex followed a similar pattern, which is very likely, she probably laid around twenty eggs.

Most of her hatchlings wouldn’t have reached their first birthday, but the ones that did survive would have put on around 1,700 pounds (771 kilograms) a year until they reached full adulthood at 20 years and reached a weight of about 9 tons. A recently hatched T. Rex would have been about the same size as a modern turkey.

We don’t see flocks of chickens darkening the evening sky as they migrate for the winter. Chickens can fly, of course, but only for short distances and not very high. They prefer not to do it unless they have to.

We tend to link feathers with flight, but the ability to fly isn’t limited to animals with feathers. Feathers help a bird to fly, but this is an adaptation because feathers evolved for different reasons. A feather’s first uses were for insulation, communication (think of a peacock mating display), and acting as a water-repellant.

Many avian dinosaurs had feathers, and it seems many in the non-avian group had them too. The example that everyone uses to show the link between dinosaurs and birds is the Archaeopteryx, a genus of bird-like dinosaurs. This group of creatures lived in the late Jurassic period, about 150 million years ago, and most would have been around the size of a magpie.

A modern chicken would recognize them as fellow birds.

Going back to the movie Jurassic Park, one of the stars of the show was the Velociraptor. At nearly 7 feet (2.1 meters) tall, these were fearsome beasts. In reality, Velociraptors were not nearly so awe-inspiring. In truth, they were much closer in size to a chicken than to an ostrich.

Their similarity to chickens could also be seen if you looked at their feet.

Dinosaurs tended to have three-toed feet that were remarkably similar to modern birds. Analysis of fossil footprints shows that they moved in the same way too. In fact, early finders of dinosaur tracks often assumed that they were looking at bird tracks.

Most birds take great care of their helpless young. A hen is no exception. She will teach her chicks how to scratch for food and drink, protect them from danger, and keep them warm.

We have fossil evidence suggesting that at least some dinosaurs behaved in the same way. This is perfectly logical, as hatchlings are very vulnerable. Even a baby T. Rex would have needed looking after until it could care for itself; it would need to learn about the world around it and look to its parent for protection.

Some paleontologists have suggested that an adolescent T. Rex probably went through a phase when it hunted differently from full adults. Not yet fully grown, it was probably faster and more agile than mom or dad and so went off hunting different beasts. Teenagers!

Still, like teenagers today, a young T. Rex seems to have moved around with the rest of his family, although we don’t know if he was reluctant to be seen in public with them.

Most of us might think that dinosaurs were quite drab—a little like an elephant, perhaps. But feathered dinosaurs could be just as gaudy as modern birds. We know this because fossilized feathers contain melanosomes. Very simply, melanosomes process and store melanin and give an animal its color.

By studying how melanosomes are arranged in different sizes and densities, researchers can accurately recreate what color or combination of colors the dinosaur had.

It’s a pity that we have so few samples to work from, but there are enough to show that a feathered dinosaur could be just as glorious as a Brahma chicken. And for the same reasons—mating displays, communication, and, perhaps, camouflage are all factors for such bold color schemes.

If you’ve ever picked up a chicken, you will have noticed that it is lighter than it should be. This is because birds have air sacs extending from their respiratory system. This system makes breathing more efficient, which is very useful when a bird needs to exert itself and makes their bodies lighter.

But chickens and other birds didn’t evolve this system; they inherited it from dinosaurs. Some dinosaurs were tiny, but others reached truly incredible sizes. The Argentinosaurus, for example, was at least 98 feet (30 meters) long and weighed at least 72 tons.

Some dinosaurs could grow to such incredible sizes due to air sacs making their bodies lighter and more efficient than they would otherwise be.

A chicken’s wings evolved from short forearms that animals used to capture small prey because their ancestors were jumping into the air to grab things above them. Chickens are a good example of an early stage of this process because they often flutter up rather than properly fly.

If you look closely at a chicken wing, you will see that it is simply a collection of fingers fused and folded against the arm bone, just like its dinosaur relative—a Velociraptor.

The expression “rarer than a hen’s teeth” indicates that chickens don’t have teeth. Not only does this save on dental care, but it also makes flying easier—not that chickens have made much of this advantage.

Many of our chicken’s earliest relatives did have teeth, but a beak made things easier. Some Theropod dinosaurs also developed beak-like structures.

An interesting example of this movement from teeth to beaks comes from China. There, a team discovered a dinosaur named Limusaurus that roamed around in the late Jurassic period 160 million years ago. A young Limusaurus had teeth, but as it grew older, it lost them, and its jaw morphed into a beak. This must have been a very strange sight and somewhat painful for the adolescent beast.

FINISH HIM: Fighting Kangaroo Pulls Wild Move Right Out Of A Video Game