10 Reasons Why You Have to Love Betty White 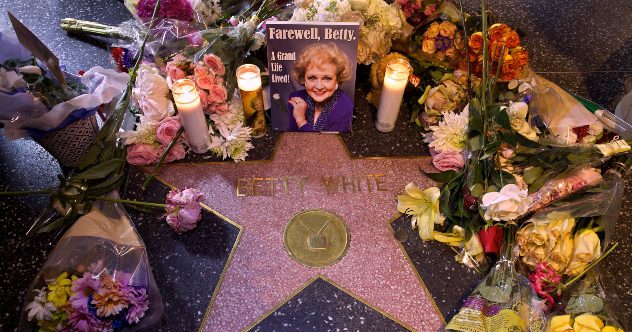 The word “legend” sometimes gets tossed around pretty casually. But our list below is about an indisputable legend. Betty White entertained the world for over 70 years as a television star and, more recently, as a pop culture icon.

Her exploits in entertainment are legendary. However, she is not only famous for her staying power and charming personality. White will also be remembered as a kind of renegade who did her own thing. It is hard to find someone who doesn’t like Betty White!

Join us as we outline some things that make Betty White not only America’s sweetheart but also America’s Grandma! Don’t love Betty White? I bet you will by the time you read through our list!

Betty White made her way into America’s heart, not on television but on the radio. She started her career in the 1930s on a dramatic radio program called Empire Builders. At this time, she was only eight! Of course, White was an ambitious youngster, so she was not satisfied with just being on the radio.

White auditioned for many parts throughout the 1940s, finally securing her first break. It wasn’t a movie role but rather a small television commercial, thanks to a conversation with producer Frank Van Hartesveldt in an elevator.

Her line? Just saying the word “Parkay,” the butter brand. She nailed it, obviously!

After this small success, she never looked back. White would go on to feature in many commercials throughout a storied career.

9 Met Her Third (and Final) Husband on a Game Show

In the 1940s, White was an attractive, funny young Hollywood star. She had many options when it came to romance. Her first marriage was to a man named Dick Barker. After marrying, the two moved to rural Ohio, where Barker owned a chicken farm. White only lasted four months before returning to Hollywood (and leaving her husband).

Two years later, she met Lane Allen, an agent. They married in 1947. This marriage lasted longer, but Allen wanted White to quit show business. Thankfully for all of us, she was unwilling to leave the business and quit the marriage instead!

White did not remarry for several years until she met Allen Ludden, a father of three and game show host. They met on the game show Password and fell in love, getting married in 1963. The third time’s the charm! Sadly, Ludden passed away in 1981. White never married again.

One of the things that made Betty White so lovable is that she had so much love to give! She even had enough love for our four-legged friends. She hosted a show called The Pet Set in 1971, which featured famous people and their pets!

White also turned down a movie role because of her love of pets. She was offered the role of Helen Hunt’s mother in the movie As Good As It Gets, starring Jack Nicholson. One of the movie’s most memorable scenes showcases Nicholson’s character getting frustrated with a dog outside his door. Nicholson’s character then throws the dog down his apartment building’s trash chute. While I don’t think this scene was written to be deliberately cruel to animals, White would not stand for it. She asked the director (James L. Brooks) if they could cut or rewrite the scene. They refused and recast White’s role instead (to Shirley Knight).

It is certainly rare for an actor to turn down a role out of principle. That’s another reason you can’t help but love Betty White!

7 She Advocated for Arthur Duncan

Betty White was not only an incredible comedic actress, but she was also a producer. One of the shows that she produced was called The Betty White Show. It was a variety show featuring comedic sketches and musical performances.

One dancer on her show, Arthur Duncan, was a black man. The network asked her to replace Duncan after complaints from viewers. However, as we know, Betty White was not the type of person to do what she was told.

Instead, she kept Duncan on the show, telling the network they would have to “live with it.” She continued to give Duncan opportunities, and he was featured on the show until it was canceled in 1954. Duncan gives her credit for giving him an opportunity and helping to start his career.

6 She Was the Oldest Person to Ever Host SNL

Betty White was a legend for her terrific personality, sense of humor, and comedic timing. Fans appreciated this, even in the digital age. Betty White fans started an online petition asking that she be the next host of Saturday Night Live, the iconic sketch comedy show.

Eventually, the petition gained so much traction that producers had little choice. White went on to host the show in 2010 at the ripe old age of 88. Unlike many other hosts on Saturday Night Live over the years, White was featured in every sketch. According to ratings, this was the highest viewership for the show in more than 18 months, boasting over 12 million viewers. Like a fine wine, Betty White kept getting better with age!

Amazingly, despite her more than 60 years of television at the time, this was the only time that White ever hosted SNL. Fans and critics were in awe of her performance, and she even won an Emmy award for Outstanding Guest Actress in a Comedy series. There were many great sketches on the show, but the one where she plays the grandmother of the character MacGruber has to be one of the funniest. It’s hard to understand why she didn’t host the show sooner.

For someone with such a long career (and long life in general), you may think that Betty White had a specific diet routine. Did she eat avocado ice cream like Tom Brady? Not at all. White was known for being a junk food lover.

Her favorite unhealthy treats included Red Vines licorice, french fries, hot dogs, and diet soda. Maybe all the candy she ate is what made her so sweet. In particular, her co-stars noted how much Betty enjoyed red licorice. Maybe that is the key to a long life and happiness.

Either way, White is even more relatable when you realize she was eating just like the rest of us!

4 Betty White Was Friends with Many Hollywood Celebrities

White has inspired many of today’s great female comedic actresses, such as Tina Fey, Amy Poehler, and Melissa McCarthy. It was her relationship with her contemporaries that helped to bolster her career. She had many notable friends in entertainment.

Was there anyone that Betty White didn’t get along with? Instead of forming rivalries, White made friendships. This is just another reason you have to love Betty White!

3 She Has the Longest TV Career in History

While you know White was on television for many years, you probably didn’t realize just how many. Her first television appearance was back in 1939 when the president of the United States was Franklin Delano Roosevelt.

While the show, called The Merry Widow, was unsuccessful, White continued to make television appearances for the next 70 years. She is generally well-known, but her most recognized works are The Golden Girls and The Betty White Show.

White was inducted into the Television Academy Hall of Fame in 1995. This did not make her any less prolific, however. After this acclaim, she appeared in more than a dozen television shows and movies. With more than 70 years of television appearances, Betty White actually holds the Guinness World Record for the longest television career by a female. If she hadn’t passed away on New Year’s Eve 2021, it is safe to say she would still be acting in movies and TV shows.

If you are like me, World War II seems like it was an extremely long time ago. The fact is, Betty White was not only alive during this time, she actually served. White took a break from her work in the entertainment business to volunteer and support the troops. She served as a volunteer in the American Women’s Voluntary Services.

White drove trucks with military supplies, among other duties. When White died in 2021, the U.S. Army even acknowledged her with a tweet, saying that “Not only was she an amazing actress, she also served during WWII… A true legend on and off the screen.”

They said it best. Not too many actors and actresses would sacrifice their dreams for the good of our nation, but that just goes to show what a special person Betty White was.

Betty White was a staple in the entertainment industry. She also claims an important distinction relating to another Hollywood staple, The Tonight Show. She is the only person to appear on the show with four different hosts.

The Tonight Show does not have many hosts in its history, only five. White appeared first with the initial host of the show, Jack Paar. Then, she appeared regularly with the longest-serving host, Johnny Carson. She appeared both as a guest and as an actor in skits.

Joan Rivers regularly stepped in as a guest host when Carson was on vacation. Who was Joan Rivers’s favorite guest? You guessed it, Betty White! White also appeared numerous times on The Tonight Show when Jay Leno hosted and has made many late-night appearances on other shows, including Late Night with Jimmy Fallon.

Her personality fit beautifully with a free-flowing format, so it is easy to see why past hosts were happy to have her on the show.