10 Strange Facts of Louis XIV That You May Not Know 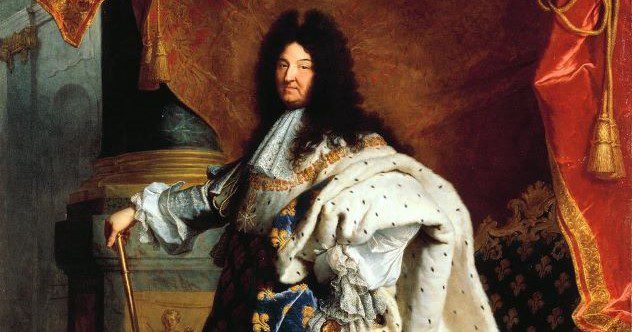 When you think of French monarchs, the first name that comes to mind is usually Louis XIV. He was one of the most famous and influential kings in European history. He definitely marked an important era in European history—and countless books have been written about his life.

However, there are interesting facts about him that go unnoticed by history despite being strange enough to shock a lot of people.

10 Louisiana Was Named after Louis XIV

Louisiana was named after King Louis XIV of France in 1682. The French explorer Rene-Robert Cavelier claimed the territory for France and named it in honor of the king. Actually, Louisiana remained a French colony until 1762, when it was ceded to Spain in the Treaty of Fontainebleau.

However, the Spanish did not make any significant changes to the colony, and it remained under French control until it was officially sold to the United States.

The sale was finalized in 1803, and Louisiana became a part of the United States. Today, Louisiana is known for its rich culture and diversity. From New Orleans to Baton Rouge, there is much to explore in this fascinating state with a past influenced by its French heritage.[1]

9 After Louis XIV’s Death… Someone Ate His Heart!

William Buckland was an eccentric English scientist who lived in the 1800s. He was known for his unorthodox methods and strange eating habits. As a geologist and paleontologist, he liked to understand perfectly the specimens that passed through his hands and even used to taste their flavor.

In 1848, he partially ate the mummified heart of Louis XIV, who died over a century before, in 1715. The incident took place at a gathering of the Harcourt family, who had in their possession the heart of King Louis XIV, which they obtained after the French Revolution and the subsequent looting of the royalty’s belongings.

It was a unique piece from a great king… and Buckland decided to taste it. Surprisingly, this event never had any negative consequences for Buckland’s career, and he remained a respected scientist in the UK.[2]

8 Louis XIV Was a Serial Womanizer

King Louis XIV was a ladies’ man who had many lovers during his reign. His most famous lovers were Madame de Montespan and the Duchess of La Vallière.

However, the king also had dalliances with several other women. By the end of his life, Louis XIV had fathered at least nine illegitimate children, and they were all given titles and positions in the French court. The king even went so far as to commission a series of official portraits of his illegitimate sons, which hung alongside those of his legitimate heirs.

In the end, Louis XIV’s bastard sons played an important role in the French monarchy, both during and after the king’s lifetime.[3]

Louis XIV was one of the longest-reigning monarchs in European history, ruling France for over 72 years. During his reign, he oversaw a period of great prosperity and transformation in France, helping to make it one of the leading powers in Europe.

It is undoubtedly a record that is quite hard to beat, especially in today’s times. His closest competitor in terms of time ruling as queen was Queen Elizabeth II, who reigned for 70 years, only two years less than King Louis XIV.

Although he was a controversial figure, Louis XIV remains one of the most iconic leaders in French history.[4]

Louis XIV became king at the age of 4. He was one of the youngest kings in the history of the world.

His early years were marked by a series of regents who ruled on his behalf. But, in 1661, Louis XIV assumed full control of the government, establishing strict censorship laws, centralizing the administration of justice, and creating a standing army.

Louis XIV’s reign also saw the expansion of French territory with the annexation of large parts of Belgium and Holland. By the time of his death in 1715, Louis XIV became one of the most powerful rulers in Europe—and has been one of the most well-known monarchs of all times.[5]

Louis XIV was one of the most successful military leaders in French history. During his reign, France was involved in numerous wars, and Louis XIV led the French army to victory in many of them.

One of his most famous victories was the Battle of Rocroi in 1643, which ended the Thirty Years’ War. Louis XIV also defended France against Spain in the War of Devolution and defeated the Dutch in the Franco-Dutch War.

In addition to his military accomplishments, Louis XIV also helped to solidify France’s position as a leading European power. He did this by expanding French territory through alliances and conquests and ensuring that the French economy remained strong.

Thanks to Louis XIV, France emerged from the 17th century as one of the most powerful countries in Europe.[6]

Louis XIV was more than just a great politician and military leader… He was also an accomplished artist and dancer!

Undoubtedly, Louis XIV was a character of contrast with a unique personality that included a dancing side. His passion for ballet began when he was just a teenager. He played the Rising Sun in Le Ballet de la Nuit (The Ballet of the Night). From there, he took the name the “Sun King” which would accompany him throughout his life.

Additionally, he was also a good dancer in social settings. At the French court, it was customary to offer long evenings of dancing. The king could participate, and it was a great honor to be able to dance with him.[7]

3 Louis XIV Supposedly Put His Twin in an Iron Mask

There are many mysteries surrounding the life of Louis XIV, the Sun King of France.

One of the most enduring is the story of his alleged twin brother, who was supposedly kept hidden away and made to wear an iron mask.

The most popular version of the story goes like this: Shortly after Louis XIV was born, his father, King Louis XIII, was presented with a second baby. Fearing that twin brothers would threaten his kingdom, the king ordered that one of the babies be sent away to be raised in secret. The child was then made to wear an iron mask so that no one would ever know his identity.

For years, rumors circulated about the existence of the imprisoned twin, and many people believed that the man in the iron mask was actually Louis’s long-lost brother. While there is no evidence that he has family ties with Louis XIV, the story has captivated hearts and minds for centuries.

In any case, there will always be doubts about the true identity of this man whom the king forced to hide his identity.[8]

2 He Commissioned the Construction of the Palace of Versailles

He requested the construction of the Palace of Versailles, which was the largest and most beautiful palace in Europe—and today, it remains one of the greatest architectural masterpieces in France.

The palace was designed to be a grandiose symbol of the king’s power and a luxurious home for the royal family. It was filled with artwork, tapestries, and furniture that demonstrated the wealth and prestige of the French monarchy. In addition, the palace featured an impressive array of gardens and fountains.

Today, the Palace of Versailles is still one of the most iconic buildings in the world, and it continues to draw visitors from all over the world due to the visionary leadership of Louis XIV.[9]

He was one of the most effective patrons of the arts in history. During his reign, the arts flourished as never before, with some of the most iconic works of art being produced during this period.

Louis XVI supported a wide range of artists, from painters and sculptors to architects and musicians. Actually, he patronized many famous artists, such as Molière and Jean Racine.

Moreover, he encouraged them to push the boundaries of their respective disciplines, resulting in some truly groundbreaking work. In addition to supporting established artists, Louis XIV also invested heavily in the training of young talent. He supported art academies throughout France so that the country could compete with Italy as the artistic hub—and it set the stage for the golden age of French art. [10]

10 Most Dangerous Beauty Products That We Still Use Anyway