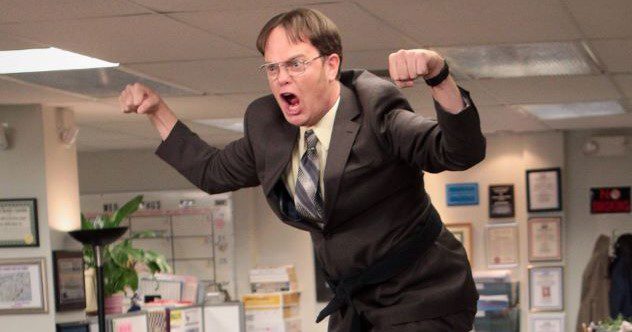 The Office is known for its unique style of humor mixed with heartwarming moments. Yet, sometimes a joke or gag turns out to be pretty disturbing when you stop to think about it. Here are 10 times The Office got dark.

Michael is most likely upset because this touching moment is upstaging his own moment, and what is really shocking is his physical reaction to this. Michael first tries to press Phyllis’s dad back into the wheelchair. When that doesn’t work, he angrily swears and noisily jerks the empty wheelchair down the aisle. In this episode, we see Michael Scott basically assault a disabled man, and that is pretty dark.

“Product Recall” is full to the brim with awkward moments. One subtle, dark moment you may have missed is the story of Debbie Brown. Brown was an innocent floor manager at the paper mill where Creed Bratton had been “taking a year off” from his regular quality inspections. Creed caused the vulgar watermark to go by unnoticed, and Michael implied he could be fired. But Creed Bratton wouldn’t go down without a fight, so he set Debbie up to take the fall for him.

Unfortunately for Debbie, she called out from work for a dental emergency one day in the week that Creed skipped his job. That was all the information Creed needed to send Dwight out with a false lead and a mission to have Debbie fired. This secured Creed’s job, and in an apparent act of mercy, he took up a collection of money from his coworkers and started a farewell card for Debbie and her children. However, Creed only added insult to injury by stealing that money from the poor woman as well.

Debbie was just an innocent manager who met a dark fate. One week she needed emergency dental work, and before she knew it, she was an unemployed mother with no severance and not even a farewell card.

Jan is one of Michael Scott’s former lovers and is known for being wonderfully unhinged. There is no denying that she has reached her peak during “The Dinner Party” as she begins to display troubling behavior. She also shows how disturbingly controlling she is of Michael.

Jan is specifically in charge of each room of the house. She has her own room for her candle business, but she also has a completely unused office that Michael does not get to use. She does not even let Michael sleep in his own bed. Jim and Pam find out that Michael is confined to sleep on a bench at the foot of the bed each night because of Jan’s space issues. Michael pointedly makes remarks about Jan’s abusive behavior throughout the night. Since Michael is clever with social situations as a salesman, it is even possible that he used the dinner party as a way to accelerate the end of this dark relationship.

The cold opening for this episode starts out light-hearted and fun as Kevin tries his best to figure out how to fill in at the reception desk. A call comes in for Andy, and Kevin bumbles his way through transferring the call. It is a silly moment, and everyone in the office laughs at Kevin as he works on transferring the call. Finally, cheers erupt as Kevin successfully sends the call to Andy’s phone. Then, there is a sudden, grim cut to Andy sitting alone with tears streaming down his face as he states that the call was to inform him that his maid had died.

Andy Bernard is a character that grew up in the lap of luxury. That does not make him heartless. In fact, he is shown to be very caring. That’s why it is so dark and jarring to see him crying in grief over an individual he probably had a close relationship with in front of the backdrop of an office full of jovial celebration.

One episode of The Office had a scene so dark and disturbing that it was only shown during the episode’s premiere and had to be cut from all reruns. “Koi Pond” in season 6 was originally a Halloween episode, or at the very least, had a Halloween-themed cold opening. In this, the Dunder Mifflin staff decides to have a haunted house in the warehouse, and Darryl acts as a tour guide to a wagon full of unsuspecting children.

Everything goes about as well as you might expect, and the children are a little confused but not particularly scared until they reach the end of the tour. At this point, Michael Scott displays his grand finale to the haunted house—a gruesome simulation of suicide, and the children scream in horror. Michael reveals it is just a prank and tries to use the scare as a warning against suicide, but the kids are too terrified to listen. It is a shockingly dark turn of events that left everyone who watched it too disturbed to allow the scene to continue to air.

Dwight Schrute is a man of mystery, and we often see him using questionable tactics to achieve his goals. When he announces that he intends to stay in Florida, the Scranton team immediately becomes interested in opening a secret “treasure” box that Dwight has left behind. Although he has instructed them to leave it alone, their curiosity wins, and Creed is nominated to open it. At first, it seems sentimental with a picture of Dwight’s coworkers inside, until a spring-loaded dart whizzes past Creed’s head. When questioned, Dwight accidentally lets it slip that the dart is poisonous.

We can’t help but wonder, what would have happened to Creed if he had been hit by that dart?

After the mess that unfolds at Angela’s fundraiser, several Dunder Mifflin employees adopt elderly dogs. It is not a surprise when lazy Kevin Malone says how happy he is with his dog that never really moves. However, dread grows in the minds of his coworkers and viewers as Kevin begins to give more details that make it apparent his animal has died. Kevin even shows a photo of his dog asleep.

Fortunately, it turns out that Kevin is just horrible at describing his situation, and his dog truly is just sluggish. However, the brief moment where the audience thinks that Kevin has just shown them a picture of a dog’s corpse is enough to turn their stomachs.

Just as we breathed a sigh of relief over Kevin’s dog, he proudly announced a few episodes later that he had a crazy adventure with a turtle. The camera crew had asked Kevin how his summer was, and he revealed that he had spent the last several months trying to rescue a turtle that he had hit with his car. We are then shown scenes of him “reassembling” the turtle shell, which are quite dark and disturbing, especially for animal lovers. According to Kevin, the turtle had not even survived being hit by the car in the first place.

We can only hope that the creature had been put out of its misery, but Kevin is known to be an unreliable source.

Pam struggles with her perfectionism in this episode, and it takes a dark turn. She watches her coworkers accept and laugh at themselves as they build a tower out of their customer complaint cards. She gets a little jealous and decides to earn the final card needed to complete the tower. Since she has been working on accepting her flaws, we expect her to make a mistake on purpose or let a past mistake come to light. Perhaps it is something embarrassing or silly.

Instead, Pam calls a random client on the phone and savagely insults the client and the client’s mother with a fat joke. This act alone is a dark turn for Pam, and it’s made even worse when Erin later mentions that the client’s mother had recently died and was also obese.

This episode had another extremely bleak moment that brought Angela’s character into question. After finding out that Oscar had been sleeping with her husband, she had been struggling for a while. But is she capable of murder? She goes as far as meeting up with one of Dwight’s sketchy contacts and directly asks for Oscar to be murdered. Dwight, of all people, talks Angela down, and she orders for his kneecaps to be broken.

The fact remains that Angela requests a service from a hitman. That is a severe crime, no matter how upset she is. Even though things somehow worked out in the end, Angela’s intentions told a different story. If Dwight had not intervened, this could have taken an ugly turn and had very dark consequences.

Kelly Ripa On Working With Regis Philbin: 'You Can't Make A Person Befriend You'