10 Things Drew Barrymore Has in Common with Ethel Barrymore

It is well known that Drew Barrymore is descended from a legendary family of actors. While she is the granddaughter of John Barrymore Sr., she has a surprising amount in common with his sister, Drew’s great aunt, Ethel Barrymore, dubbed the “First Lady of the American Theater.” Ethel, who died at the age of 79 in 1959, was as celebrated in her time as Drew is in ours.

Even though they were born 96 years apart, there are some striking similarities between these two Barrymore actresses.

10 Born into an Acting Dynasty

It is no secret that Drew Barrymore was born into a very prestigious acting dynasty, sometimes referred to as “The Royal Family.” Her grandfather John Barrymore Sr. was a legendary actor who delivered remarkable performances in Hamlet and Richard III on stage and starred in many prominent films, including the classic Grand Hotel.

His siblings—sister Ethel and brother Lionel—also enjoyed extremely successful acting careers. However, the trio was preceded by a number of other successful actors, most notably their mother Georgiana Drew, father Maurice Barrymore, and their maternal grandparents, the revered actor/theater managers John Drew Sr. and Louisa Lane Drew. The lineage goes back even farther than that, making Drew Barrymore at least the sixth generation of actors in the family. Both Drew and Ethel grew up in the shadows of an iconic theatrical family and undoubtedly understood the expectations accompanying such a legacy.[1]

9 Were on Their Own at an Early Age

We all know Drew Barrymore did not have a traditional childhood with her bohemian upbringing and rise to stardom as a little girl. However, it is just as shocking to learn that she took on adult responsibilities, becoming a legal adult when, at the age of 14, she gained her emancipation in a court of law. As scary as this seems and as challenging as Drew admitted it was in the beginning, there is good reason to believe that separating from her parents was the right decision under the circumstances. This action was actually recommended by those caring for Drew at a mental health facility which she had entered at the age of 13 when her turbulent life was spinning out of control.

Ethel found herself in a similar position just before her 14th birthday when her beloved mother, actress Georgiana Drew, died. The devastated Ethel had to grow up quickly, which included significant self-sacrifice. Not only did she have to take care of herself but also her two brothers, Lionel and John. Because of the financial strain that arose when her grandmother, Louisa Lane Drew, gave up managing the famous Arch Street Theatre in Philadelphia, Ethel was soon forced to abandon her dream of becoming a concert pianist and leave school. Instead, she had to work in the family trade, initially touring with her uncle’s stock company and living alone in boarding houses while she was still underage.[2] 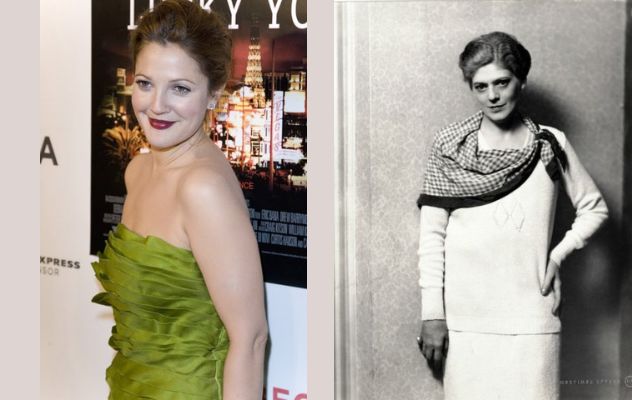 The physical resemblance between Drew and Ethel Barrymore is really startling. Of course, it’s not surprising that they would look alike since they are from the same family, but considering Drew is only Ethel’s great-niece instead of a direct descendant, it is surprising that the resemblance would be so obvious.

The most widely circulated photos of Ethel are from her later years when she appeared very matronly. Still, if you look at the pictures of her as a young woman, the similarity between her and Drew is very clear, sometimes even uncanny.[3]

Drew Barrymore has been in many high-profile relationships over the years, including three marriages and at least two broken engagements. None of her marriages lasted for long. Her first union, at the age of 19, was to a Welsh bar owner, Jeremy Thomas, from 1994 to 1995. Her second marriage, to comedian Tom Green, was from 2001 to 2002. In 2016, Drew split from her art consultant husband, Will Kopelman, father of her two daughters, after almost four years of marriage. Drew is adamant that she will never marry again, although she has said that she may consider living with someone.

Ethel, who married a millionaire’s son, Russell Griswold Colt, in 1909, had two broken engagements and a long string of suitors in her past. She separated from Colt, the father of her three children, after 11 years of marriage, divorcing a few years later. Although she was only in her forties at the time, Ethel Barrymore would never remarry.[4]

6 Darlings of the Media

Media coverage of Drew Barrymore has been plentiful since she was a small child with her breakout role as Gertie in the massive hit film E.T. the Extra-Terrestrial (1982). As she grew into a pop culture icon, Drew’s career and personal life made great copy for the press. We read about her many romances, obstacles she overcame, and her journey from an at-risk teen to a well-adjusted adult, thriving as an actress/filmmaker and mom of two.

The newspapers and periodicals of Ethel Barrymore’s time lavished much attention on her as well, and her love life was not off-limits. According to her autobiography, when she returned to America after working in England as a young woman, Ethel found that her romances had become fodder for the press, who would often embellish the details. The extensive coverage of her life continued, landing her on the cover of many magazines, including Time, Ladies Home Journal, and a 1923 issue of McCall’s,” which featured an article about her entitled “At Thirty Every Woman Faces a Crossroads.”[5]

Ethel Barrymore was known to be an avid baseball fan. This, along with her enthusiasm for boxing, may come as a surprise in light of her image as a regal, sophisticated artist and socialite. In a 1942 article, The Milwaukee Journal said: “She can quote baseball averages almost as well as her lines in ‘The Corn is Green.’”

One of Drew Barrymore’s most popular films is the baseball romance Fever Pitch (2005), in which she plays a woman who falls in love with a Red Sox fanatic.

Drew admitted that when she began work on the movie, she was a “newcomer to the temple of baseball.” However, she eventually developed an appreciation for Red Sox mania, explaining at the premiere: “I love Boston, I love the team, I love the people that are so emotionally affected by this sport and this team. It’s just great.” She added, “And it’s so wonderful to learn about it and understand the history and get superstitious along with everybody.”[6]

Over the last hundred years, the Barrymores have become almost as famous for their alcohol and drug addictions as their acting.” Drew’s addiction problems, which began in childhood, were very public and detailed in her 1990 memoir Little Girl Lost. However, Drew managed to overcome her addiction and has gone on to lead a healthy life. Unfortunately, the same cannot be said for several other members of her family, including her paternal grandfather, whose addiction destroyed him.

Ethel Barrymore’s drinking problem is not nearly as well known as the addiction struggles of other Barrymores, but she was not immune from what has been coined “The Barrymore Curse.” She did eventually deal with the problem. According to the Los Angeles Times, “Ethel, at 60, finally faced her alcoholism and stopped drinking, abruptly and forever.”[7] 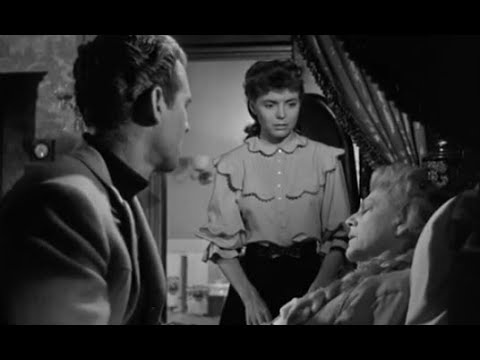 Following in the footsteps of her ancestors, Georgiana Drew and John Drew Sr., Drew is best known for her comedic roles. The highlights of her career include performances in feature film comedies like Never Been Kissed, Music & Lyrics, 50 First Dates, and Charlie’s Angels. However, she has shown her versatility with critically acclaimed dramas Everybody’s Fine and Grey Gardens along with her performances in suspense movies such as the 1996 thriller Scream.

Ethel Barrymore may be best remembered for dramas, such as her Academy Award-winning turn as a dying mother opposite Cary Grant in the 1944 film None but the Lonely Heart. But she succeeded at portraying a wide variety of characters. Comparing her to her brothers, The Norwalk Hour said in her obituary: “Ethel was the most versatile, ranging from light comedy to tragedy with equal skill.” She demonstrated her knack for suspense with roles in films like The Spiral Staircase, for which she earned an Academy Award nomination.[8] 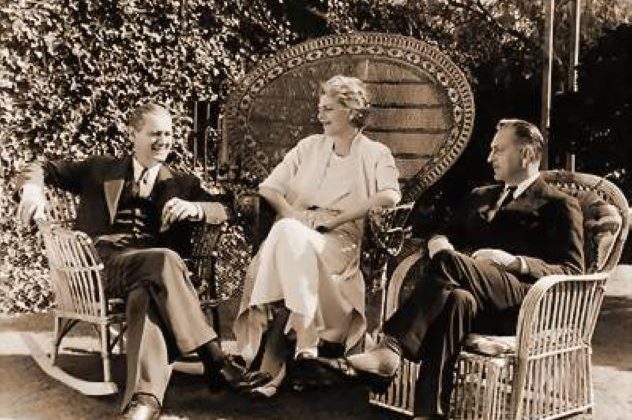 Both Drew and Ethel were the daughters of actors who were not around much. In 2014, The Daily Express quoted Drew as saying: “My parents split up before I was born, and my dad was just never capable of being a father.”

Drew accepted her troubled and unconventional father, John Barrymore Jr., for who he was, but she has admitted wishing he had been more like a traditional dad. After becoming a parent herself, she found it hard to understand the decision her own father had made to stay away so much. However, she did grow closer to him during the last few years of his life when she took care of him in hospice.

Ethel and her two brothers were left in the care of others for much of their childhood because their parents were frequently on tour. After her mother’s death, Ethel’s father soon remarried, and she saw very little of him. According to Ethel’s autobiography, her father did not even bother to let her know he was getting married again. She learned of the nuptials when the Mother Superior at her boarding school showed her a newspaper clipping. If her father’s absence wasn’t tragic enough, Ethel was eventually compelled to pay to have her father housed in mental institutions when he lost his sanity after suffering for many years from syphilis.[9]

The Barrymore women know how to have a good time. There was much coverage of wild child Drew’s partying lifestyle during her youth, frequenting such edgy venues as the notorious Studio 54 when she was just a child. As The Guardian reports, the actress herself admits that she was a “party girl” from the age of eight. She and her mother and her mother’s friends would go out “up to five times a week.”

Things were more sedate in the Victorian age but popular, young Ethel could be a fun-loving social butterfly. A favored guest among the aristocracy, she recalled many lively outings with illustrious people in her autobiography. In particular, she recalled house parties in England at the estates of her high society friends.[10]