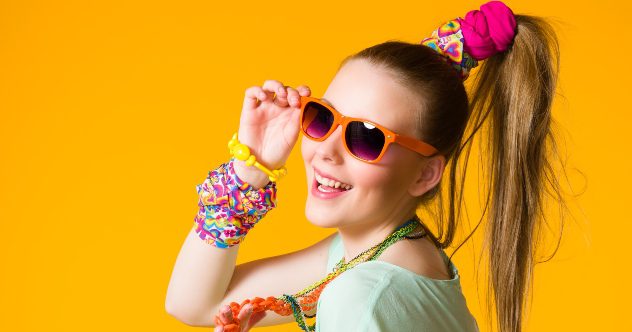 As a child of the ’90s, I reached peak pop culture during the 2000s. Like many other millennials, the 2000s were packed with frosted tips, head-to-toe denim, and boy bands. Icons like Brittney Spears and Justin Timberlake were plastered all over the walls, with Saturday morning cartoons dominating our weekends. Damn, the nostalgia is hitting me! While there is plenty of stuff we remember about those days, here are ten things no one remembers from the 2000s.

Related: 10 Hilarious Historic Predictions Of Life In The 2000s

The fashion during the 2000s was a hot mess of layering perfection. We are each guilty of one or two or twelve of these fashion faux pas. The first half of the 2000s brought us oversized clothes, monochrome hues of brown, and lots of tracksuits, but not just any tracksuit, terry cloth, velour, or cashmere tracksuits. Usually with rhinestone embellishments across the butt proclaiming, “Juicy.”

During the latter half of the 2000s, we donned calf-high boots, fingerless gloves, layered tank tops, and then topped our ensemble with a black vest. Hairstyles showcased chunky highlights, and everyone considered themselves emo during the mid-2000s, even if all they listened to was Miley Cyrus.

Other fashion items that had a unique hold on the general public during the 2000s included:

Before iPods became a thing, we had our CD players, but even those were bulky, so along came the iconic Hit Clips.

Hit Clips was a miniature way to listen to music. The device was no bigger than two inches square, with a space to insert a small chip. Once inserted, the music would begin to play. The music on each chip was only a 60-second clip of a singular popular song. While the quality was never the greatest, if you had Hit Clips, you were so cool.

You could also clip all your music chips and listening device together and then clip them to your pants or backpack. So instead of a bulky CD player, we carried a mess of square music chips on clips. Iconic.

When Hit Clips were first introduced in 2000, there were only three featured artists: NSYNC, Britney Spears, and Sugar Ray. While we now carry our songs on Spotify, each time a millennial sees Hit Clips, our soul flickers back to life.

8 The Establishment of Homeland Security

September 11, 2001, was a devastating day for America and the world. The terrorist attacks that took place shattered our idea of security and safety. While many of us were still children, the changes that followed 9/11 have shaped how we travel and interact with the wider world.

In November 2002, just one year after the attacks, President George W. Bush signed the Homeland Security Act of 2002. This act was to oversee the restructuring of all security measures that take place within the U.S.; this included public security, border control, cyber security, and disaster management.

President Bush said that with more than 170,000 employees assigned to Homeland Security, these “dedicated professionals will wake up each morning with the overriding duty of protecting their fellow citizens.” We tip our hat to these men and women that still seek to protect our lands from similar threats that took place more than 20 years ago.

Barbie may have had a hold on the ’90s, but My Scene dolls soon took the stage as the main doll of the 2000s. At the time, Barbie’s diversification was limited, and Bratz’s were all-powerful, so Mattel launched My Scene dolls to compete.

My scene did not stick around for very long, ending their line in 2011 after the Bratz parent company MGA filed several legal suits claiming My Scene dolls copied their idea and branding.

There are a few contenders for the big screen queen of the 2000s. Some might crown Lindsay Lohan, but we will nominate another queen, Amanda Bynes. A true icon, Amanda Bynes deserves her own number on our list of forgotten things from the 2000s.

Amanda Bynes started her career with Nickelodeon on All That. The comedy sketch show, similar to SNL, was for kids and gave us characters leading to The Amanda Show. The Amanda Show ran from 1999 to 2002, earning her many Kids’ Choice Awards.

In 2002, Bynes made her switch to the big screen, becoming our new favorite leading lady for teen movies. But our favorite Bynes movie has to be her 2006 flick, She’s the Man, starring Bynes alongside the one and only Channing Tatum.

She’s the Man is loosely based on Shakespeare’s Twelfth Night, where Bynes poses as her brother to play on an all-male soccer team. Hijinks, of course, follows Bynes as she falls for her teammate Tatum. The movie is packed full of hilarious and outrageous one-liners, mini skirts and high heels true to Y2K fashion, and of course, a happy fairy tale ending. A true classic of the 2000s.

While we may have mentioned chunky highlights that littered the 2000s, you may have forgotten about the hair gadgets promoted endlessly on TV.

Let’s start slow with the iconic butterfly hair clips, which, thank the maker, are back in style!

Next, we donned those deadly plastic headbands that you had to put over your head, then pull back up over your face, avoiding injury to your eyes, to stab your skull by pulling your hair back; phew, what a workout. I don’t know about you, but I can still feel the jabs on my neck and face as I tried to place my “flexy stretch hair comb” just right.

Following our hair fixation came clip-in features like clip-in colored hair or the gosh awful faux hair scrunchy, which usually did not match our actual hair color. Then came items like the Hairagami, the slap bracelet for your hair, and last but not least, the Conair Quick Gem, essentially a Bedazzler for your hair.

These hair gadgets latched onto our souls until we were ready to fry our hair with plain old hair straighteners. When did we get so boring? I say, bring back the hair bling!

4 The Reclassification of Pluto

While our generation was not super fascinated with space, we sure flipped when the scientific community removed Pluto’s status as a planet. In 2006, Pluto was reclassified from a planet to a dwarf planet due to not meeting various criteria, mainly size.

Pluto is smaller than our Earth’s moon, and since it lacks size, Pluto doesn’t have enough mass to disrupt space’s gravitational pull and cause nearby material to drift into its orbit. With the reclassification of Pluto, the general public was outraged, and many of us still consider our little friend a planet.

We never truly forgot about you, we promise.

Your number one fan,

Jelly bracelets were simple colored silicon bands you would wear in bulk. Jelly bracelets appeared in the ’80s, then again in the 2000s. While there was a rumor different colors meant that you were willing to perform or participate in certain sex acts, the rumor was never truly founded.

We wore dozens of jelly bracelets, sometimes up to our elbows, to complement our vest and chunky highlights, I’m sure.

Next came Silly Bandz. If you didn’t cover your arms in these things, you weren’t living. These bracelets are also made of silicon rubber but were made to look like specific shapes, not just circles. You could stretch out the band to wear it as a bracelet; then, when you took the Silly Bandz off, they shrunk back to their original shape.

Silly Bandz is still sold today, but the true 2000s comeback kid would be jelly bracelets.

Dance Dance Revolution was an iconic arcade game. The think platforms led to epic battles with your best friends on Friday nights at the roller rink. It even came with grab bars, so you didn’t lose your cool.

Then came the Dance Dance Revolution Mat that connected to your Playstation. What better way to dance than from the comfort of your home? This was right about when in-home technology started taking off, and experiencing things at home was new and exciting. The sensors were crappy, the songs were good, but the laughs were unforgettable.

1 We Were All Guitar Heroes

If Dance Dance Revolution does not remind you of Guitar Hero, you need to kindly leave. Guitar Hero was incredible, and every kid at school had it. We all know and still love the songs, and instant nostalgia hits us when we hear songs like Sweet Child O’ Mine, Carry on Wayward Son, I Wanna Be Sedated, and Iron Man.

Guitar Hero was introduced in 2005 and quickly became a success as we each felt like true rock stars using our guitar-shaped controllers to rock out to timeless rock classics. Now, if only we could get that feeling back as adults; I know I’ve been chasing the same high ever since.