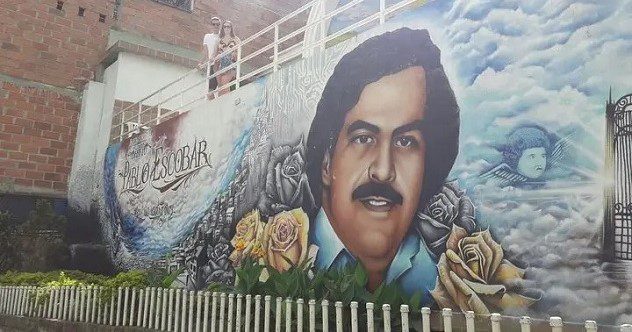 Pablo Escobar is a famous drug kingpin that most of us have learned about via the popular Narcos TV series on Netflix. Despite his fame, quite a few facts about this drug lord have largely flown under the radar! Here are 10 things you’re not likely to find in a local history book about this drug lord.

10 He’s the Reason There Are Hippos in Colombia

Pablo Escobar is well known for importing and exporting drugs from Colombia. However, that’s not all that he imported. He also imported a herd of hippos for his private zoo!

After the downfall of the drug lord, the hippos weren’t killed or exported. Instead, they were allowed to run wild and have now made zones along the Amazon river their habitat. The animals adapted extremely well to the South American climate, which is similar to the environment in Africa they originally called home.

And while some of the hippos are contained on Pablo’s former property turned amusement park, others roam free.

Today, the debate is ongoing on whether the hippos should be put down in order to leave Pablo’s legacy behind or whether they should be protected as part of Colombian history.[1]

9 He Was a Major Driving Force for Medellin’s Transformation

Medellin has become a tourist hotspot in recent years. In fact, it’s been listed as one of the top destinations in South America to visit!

However, it wasn’t always that way. And it’s largely thanks to Pablo Escobar that it’s gained such fame. No, we’re not talking about how he put it on the map. We’re talking about how the city has made a huge revival to eliminate the drug lord from its past.

In order to overcome the violence, hardship, and delinquency in the city, the government has spent the last 30 years pouring money into city improvements. The result has been some incredible transformations, including Colombia’s only metro system.

What’s more, the city has worked hard to eliminate locations that are connected to Escobar, replacing them with parks and cultural spaces. The Monaco Building, for instance, where Escobar once lived, was destroyed just two years ago and replaced with a memorial park dedicated to the victims of the kingpin’s violent reign.[2]

8 There’s Speculation as to Whether His Death Was Suicide

Although the United States DEA takes responsibility for the capture and killing of Pablo Escobar on the roofs of some homes in Medellin, some say that’s not what really happened. You see, according to Escobar’s son, the kingpin was an expert at avoiding the police. He had strict rules for keeping himself and his family safe by staying undercover, avoiding phone calls, and more.

Despite Escobar knowing that the DEA was after him and was actively monitoring his calls, he placed a phone call to his son from a phone line. On the call, he stated his whereabouts and made an odd sort of goodbye, telling his son to stay safe. Just a few hours later, the DEA ambushed Escobar on the rooftops nearby and gunned him down.

While many people say this was thanks to the detective work, the behavior does seem odd. It leaves many people to wonder if Escobar actually wanted to get caught and was ready for his time as the tyrant of Medellin to end.[3]

7 He Was a Family Man

It might be hard to believe, considering the violence and destruction Pablo Escobar caused, but he actually dearly loved his family.

According to his wife and kids, Pablo went out of his way to make sure that they were safe, protected, and loved. He could do something as horrible as torture a man and then go home and act like it never happened.

On top of that, Pablo made sure that his kids learned key values about kindness and benevolence. While it might seem strange to us now, it looks as if Escobar knew deep down that what he was doing was wrong and wanted a better life for his kids.

His efforts seem to have paid off, too, as his family was kept safe despite all his shady dealings. They’re still alive and well today, although they’re quite private and out of the public eye.[4]

6 His Prison Wasn’t Really a Prison

In 1991, Pablo Escobar made a deal with the Colombian government where he agreed to serve time in prison in exchange for avoiding extradition to the United States. Pablo knew that the consequences of extradition would be much more severe than his punishment on Colombian soil.

However, while Pablo agreed to spend five years in jail, he was going to do it on his own terms. He had a private prison built, where he would be jailed for his remaining time. As you can imagine, the kingpin built something that was pretty far from a prison. Instead, he constructed a giant party house with a bar, a nightclub, and a billiards room, among other things.

He received regular visitors and lived a lavish lifestyle. Sure, he was out of the public’s view, but in his eyes, he was living it up like a king.[5]

5 You Can Meet His Brother if You Visit Medellin

While Escobar’s wife and kids lead a quiet life out of the public eye, there’s one member of his family that doesn’t. In fact, that family member is alive, well, and making a mint off the dark fame of Escobar. That person is his brother.

There are a number of Pablo Escobar tours in Medellin that foreign tourists frequently go on. At the very end of the tour, which takes you around famous sights in Medellin that are connected to the drug lord’s life, you’ll get the chance to have coffee with Pablo’s older brother Roberto.

Roberto is a relatively quiet and reserved man, but he’s more than happy to talk about days gone by. He’ll also pose with foreigners for a photo and will give you some more context as to what life was like during the dark days of the younger Escobar’s reign.[6]

4 One of His Former Homes Is Now a Theme Park

Although the luxurious Monaco building was destroyed a few years ago, there’s one Escobar property that wasn’t destroyed: Hacienda Napoles.

Hacienda Napoles was one of Escobar’s many vacation homes in the Antioquian countryside. What’s unique about this place is that instead of choosing to destroy the building, the Antioquian government decided to turn it into an amusement park. Today, there are water slides, swimming pools, and a petting zoo that you can visit.

You won’t find any references to Pablo there, either. Unless you know the inside scoop on the hacienda, you’d never realize the dark past this place holds.[7]

3 His Old Prison Has Been Converted into a Monastery

Remember the huge luxury prison that the cocaine lord built? This place, like so many of the other areas associated with Pablo Escobar, has been converted into a place with a positive future.

La Catedral, as it’s called, lay dormant for quite a few years after the fall of Escobar. In fact, the prison was mostly in ruins when a group of monks purchased the property and began the process of rebuilding it. The monks renamed the prison complex La Virgen Desata Nudos and made it into a place of worship. Both the monks and locals from the surrounding area regularly gather there for worship.

You can still visit the prison and can meet and speak with the monks. However, you’ll find a place that’s very different from what Escobar lived in years ago.[8]

Many of Pablo’s old properties have been converted in order to overwrite their dodgy past. One building that hasn’t been renovated and transformed, however, is his Hacienda La Manuela, a property that sits on the shores of the Guatapé reservoir.

This property was destroyed by a bomb back in 1993, just a few months before the kingpin was shot and killed. Prior to that, it had been one of Escobar’s most prized properties.

Even after the bombing, Escobar’s gardener/guard stuck around in the home, living there illegally and offering narco tours to anyone who wanted to check the place out. Many tourists headed there hoping to find leftover cash on the property from the drug lord’s heyday, but so far, none has been found.

A few years ago, the Colombian government took control of the property, and today it’s off-limits. Still, there are sketchy tours that will take you out to the property if you really want to go. And if you don’t want to run the risk, you can check it out from a distance on one of the boat tours that pass by regularly.[9]

1 He Almost Became the President of Colombia

It might seem hard to believe, considering how much violence he was responsible for, but Pablo Escobar was actually an extremely popular figure to many people in Medellin. While most people were aware of his violent crimes, his intimidation tactics, and his way of getting what he wanted, Escobar had still taken the time to make himself beloved in his community.

You see, Escobar worked as a modern-day Robin Hood to gain the love and support of the townspeople. He donated incredible amounts of money to the poor in certain zones of the city, giving out money for favors and buying their silence.

The result is that many of the poorer people in the city regarded him as a hero and someone who was helping give them a better life. In fact, Pablo became so popular that he decided to try his luck at running for president! His campaign was so successful that if it weren’t for the minister of justice, Rodrigo Lara Bonilla, making a public speech about the drug lord’s crimes, he probably would have won the presidency.

While Bonilla saved the country from being ruled by a tyrant, he paid the price with his life.[10]