When you think of Halloween, what candy comes to mind? For many people, it’s candy corn. Over 35 million pounds of the sugary triangles are sold in October alone. It’s one of the most iconic autumn candies and has been in existence for over 100 years. In fact, candy corn is not much younger than one of the oldest candies around—Necco Wafers.

Adults and kids alike have enjoyed the sweetness of candy corn since the late 19th century. It’s claimed that a man named George Renninger invented the candy in the 1880s. George worked for the Wunderle Candy Company, which began selling the candy. Eventually, the recipe was picked up by the Goelitz Candy Company (which is now Jelly Belly Candy Company), and as they say—sweet history was made.

Love it or hate it, let’s take a look at ten things you might not know about this classic Halloween candy.

Related: 10 Sweet Treats That Are Older Than You Think

Before automation, making candy corn was a very difficult process. The candy has three layers—white, orange, and yellow. The ingredients were heated until they were melted, then the hot liquid was poured into buckets. Employees would have to walk with these heavy buckets and hand-pour the liquid into kernel-shaped molds. Since candy corn is multi-layered, the employees would have to repeat this process three times.

It was such hard work that candy corn was only made for several months out of the year. Now that the process is automated, candy corn is made all year.[1]

Candy corn has ingredients we all expect, like sugar, corn syrup, and artificial flavor. But have you heard that it also contains bug secretions? The smooth coating on the outside of candy corn is made from lac-resin. Lac-resin is an insect secretion from lac bugs (but not the actual bug itself). These red parasites secrete a resin to protect themselves, which is then scraped up and used to give candy corn its shiny look. You haven’t noticed this on the ingredient list because it’s probably labeled as “confectioners glaze.”

Don’t give it too much thought! Lac-resin is in a lot of stuff, plus bug consumption is not that unusual in many places around the world.[2]

8 Candy Corn Has a Variety of Interesting Flavors

Candy corn is best known for its sweet vanilla and honey flavor. Over 100 years later, new flavors have been introduced—some tasty, and some just downright strange.

There are the traditional flavors, like S’mores Candy Corn, Harvest Corn, and Caramel Apple Corn. But if you want to take it up a notch, there are also really unusual flavors, like Brach’s Tailgate Candy Corn or Thanksgiving Dinner Candy Corn. The Tailgate mix includes flavors like hot dogs, hamburgers, and popcorn. Thanksgiving Dinner is also made with flavors you wouldn’t expect, like turkey, green beans, cranberry sauce, and coffee. According to one reviewer, the green bean flavor was “like mowing the lawn with your mouth open.” If you can handle the Harry Potter Bertie Botts beans, then these candy corn flavors might be right up your alley.[3]

7 You Can Make Your Own Giant Candy Corn

That didn’t stop some YouTubers from trying! There are videos on YouTube with instructions for making giant candy corn at home. With a lot of sugar and patience, you could go for the world record yourself and impress all your friends.

If that sounds like too much effort, Jelly Belly now offers a giant version of their candy corn for purchase. This version is about three times the size of their regular candy corn and has chocolate, vanilla, and cinnamon flavors.[4] 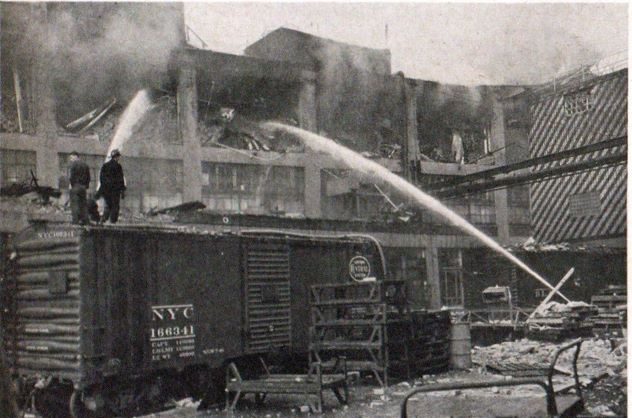 So, 1950 was a bad year for candy corn. On September 9, 1950, while preparing for the Halloween season, the Goelitz Confectionery in Midland Park, New Jersey, caught fire. One of the kettles used to heat the candy corn ingredients caught fire and caused the biggest candy factory fire in history. Thankfully, all 12 workers managed to get out unharmed, but the fire kept burning.

The factory was a block long, and nearby residents had to hose down their homes to keep them cool. It took days before the fire was finally out. There were thousands of onlookers, and the Goelitz company lost 2000 pounds (907 kilograms) of candy corn that year.[5]

Also, during Halloween in 1950, kids across the county were getting sick with bad diarrhea and skin rashes. It was Halloween, so of course, kids were eating more candy than usual. But it was making them sick. These symptoms were eventually linked to the consumption of Orange Dye No.1.

Back in 1950, Orange Dye No. 1 was used as a food coloring in many products—like candy corn and even hot dogs. Orange Dye No. 1 is considered a “coal-tar” dye (basically, it is derived from byproducts of processed coal). It also contains benzene, which is toxic. Rightfully so, this dye ended up getting delisted from the FDA.[6]

Move over pumpkin spice, candy corn is the new kid on the block! For many years now, a number of breweries have been experimenting with candy corn flavors. Pumpkin is always a classic, but it’s a fun idea to experiment with new, seasonal flavors. Urban Growler Brewing in Minnesota brews their Candy Corn Imperial Cream Ale with 65 pounds (29.5 kilograms) of the sweet stuff. And the Mason Jar Brewing Company in California named their version the Candy Cornholio. Candy corn, plus beer—why not?

Candy corn in beer might sound excellent to some, but candy corn on pizza? Back in 2017, a Twitter user decided to bake their pizza with an additional topping—candy corn. After posting it online, the colorful candy corn pizza went viral and sparked a debate even more lively than pineapple on pizza. Several chefs, including Giada De Laurentiis and Curtis Stone, even tried it on the Today Show. Overall, the consensus was that candy corn definitely does NOT belong on pizza. And 99% of amateur chefs would agree. Let’s leave that viral trend back in 2017.[7]

Generation X is any person born between 1965 and 1980. As it turns out, this generation loves candy corn more than any other—although it is a close race. In 2020, the National Confectioner’s Association reported that 58% of Gen X’ers enjoy the candy. Right behind them are the Baby Boomers at 56%.

It is also reported that California is the state that purchases the most candy corn. So if you’re a Gen X’er from California? Chances are pretty good that this is your favorite Halloween treat.[8]

2 Candy Corn Has Been Deep-Fried

For those that don’t like candy corn, maybe you would like it better wrapped in crescent dough and deep fried. Everything else gets deep-fried (deep-fried Twinkie, anyone?), so it’s only reasonable that candy corn does too. But is this only available at the state fair? Nope. In fact, there are plenty of recipes to try at home. Some use crescent dough; others use Bisquick or Funfetti pancake mix.

The original creator is Amy Erickson, who writes the blog, Oh, Bite It. She decided to create the gooey, sugary, fried treat because she had a plethora of leftover candy corn. As with anything related to candy corn, reactions were split. Depending on who you ask, it might be the best thing ever… or a step too far.[9]

This quintessential Halloween candy wasn’t actually created with that intent. Before it was known as candy corn, it was called “Chicken Feed” and sold as penny candy. Over 130 years ago, a large part of the population was rural and worked in agriculture. In order to market to this demographic, candies looked like pumpkins, turnips, and corn. Did you know that if you stack up candy corn, it looks like corn on the cob?

Before we had the help of machines, candy corn was only produced several months out of the year, typically in the fall. It wasn’t until after WWII that candy corn really became known as a Halloween favorite. Sugar rations were ended after the war, and trick-or-treating became a big deal. At that point, candy corn was prepackaged, making it easy to hand out. Plus, just look at it—its colors of white, yellow, and orange give it a festive Halloween flair.

Today, candy corn ranks up there as one of the most popular Halloween candies. Love it or hate it, It’s a favorite that’s here to stay! [10]