10 Unusual Things That Have Washed Ashore

Over 80% of the ocean is still unexplored, meaning there are many bizarre and potentially horrifying things lurking beneath the surface of the water still to be discovered. However, we don’t always need to trawl the depths to find these unusual objects; sometimes, they wash up on shore. Most people visiting a beach will find nothing of note along the shoreline except a few shells and some seaweed, but every so often, something strange is swept in by the water.

This list collects some of the most interesting and rare things that have been washed ashore, including man-made curiosities as well as naturally occurring aquatic oddities.

In January 2012, police and coastguards turned up at the beach in Old Portsmouth, England, after a call came in about a body floating in the water and being pushed up the beach by the tide. The authorities quickly realized that the object was not a dead person but rather a life-size replica of the titular alien from Steven Spielberg’s E.T. the Extra-Terrestrial (1982). The figure belonged to Margaret Wells, who was robbed in September 2011. The thief took the replica along with some jewelry.

Given the uniqueness of the figure, the police quickly identified its owner. When they called Wells to inform her of the discovery, she exclaimed, “Oh God, I knew E.T. would come home.” The replica had been made by her daughter nine years earlier for a stage make-up course. Wells commented, “He’s lost a finger and looks a bit roughed up. But he had a smile on his face.”[1]

The term globster is used to describe any unidentified organic mass that washes up on the shoreline of a body of water. Often these bizarre blobs look like the remains of mythical sea monsters, but DNA testing reveals them to be the rotting bodies of large sea creatures, such as whales, octopuses, squid, and sharks. However, even armed with this knowledge, some globsters look downright otherworldly. Take for instance, the globsters that look like they are covered in strands of white hair.

Two such creatures, later identified as whales, washed up on beaches in the Philippines in 2017 and 2018. Their strange hairy appearance was due to the decomposition of muscle fibers. Fishery Law Enforcement Officer Vox Krusada had to take samples from the 2018 globster to identify the exact species. After working near the globster, he said the smell was so bad that “I almost puked. I felt better after taking a bath, but the stench still lingers in my nose.” [2]

In 2017, sections of huge pipe were being shipped from Norway to Algeria when an accident caused 12 long lengths to fall into the sea. Some of the sections were carried by the current and washed up on the coast of England. While it is not unusual for cargo that falls overboard to wash up on beaches, it’s not every day that massive pipes hundreds of feet long are carried in by the waves.

The longest piece of pipe ended up on a beach in Norfolk and measured 478.5 meters (1,570 feet). It had a diameter of almost 2.5 meters (8 feet), wide enough to drive a car through. Locals were curious, and some even walked on top of the pipe, so guards were stationed to keep people away until it could be retrieved. Trygve Blomster, the export manager at Pipelife, the producer and supplier of the pipe, warned people that “If you fall beside that while it moved, you will be smashed. If you walk on the pipe and you drop off, it is extremely dangerous.”[3] 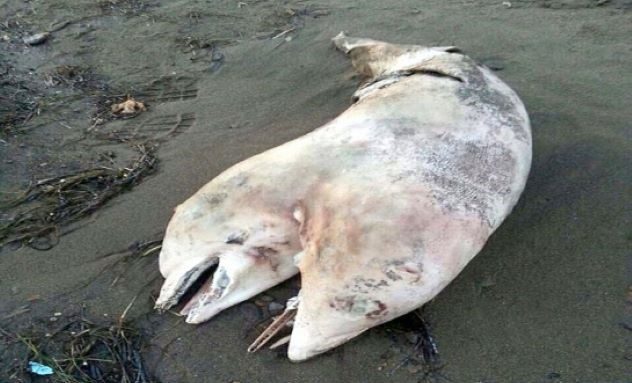 Thousands of marine mammals, including whales and dolphins, end up beached each year. This phenomenon is so common that it even has a name: cetacean stranding. While they often start to smell revolting as they decompose, there is usually nothing particularly noteworthy about beached sea life. However, in 2014, a tourist visiting a beach in Dikili, Turkey, found something incredibly rare: a dead two-headed dolphin calf.

Mehmet Gökoğlu, a marine biologist from Akdeniz University, explains that two-headed dolphins are uncommon but are essentially the same as human conjoined twins. Although the carcass of the dolphin warranted scientific study, Gökoğlu is unaware of where the remains were taken. The university wanted to display the rare dolphin, but all we are left with is photographs.[4]

In 2021, Reza Baluchi left St. Augustine, Florida, in a hydro pod of his own making in the hopes of reaching New York. The pod is essentially a cylindrical hamster ball with a ring of floatation devices attached to each end. Baluchi never made it to New York and instead washed up ashore in Flagler County, about 30 miles from his starting destination. Baluchi wanted to run on water from Florida to New York to raise money for public services, such as the U.S. Coast Guard, and to show people they can do anything. “Don’t listen to anyone. Chase your dreams,” he told a local TV station.

He should probably listen to the U.S. Coast Guard, though. In 2014, he attempted to reach Bermuda, despite them warning him not to. After being alerted by his distress beacons, the Coast Guard stepped in, which Captain AJ Gould says “placed an enormous financial burden on taxpayers to conduct a rescue.” That didn’t stop him, though; he made two more attempts to reach Bermuda in 2016 before embarking on his 2021 journey to New York. He has, so far, not successfully completed a trip in his hydro pod.[5]

When most people think of sharks, they think of great whites, but the ocean is also home to far rarer specimens, such as the frilled shark and the goblin shark. Both of these terrifying sharks are prehistoric, swimming in the oceans while dinosaurs were walking the earth. The frilled shark looks like a mythical sea serpent, with an eel-like body and 300 teeth arranged in 25 rows. The goblin shark has an elongated snout and jaws which extend when it bites.

Both sharks live in the ocean’s depths, thousands of feet below the surface, meaning they are not often seen by humans. Sometimes they are accidentally captured in fishing nets or are washed ashore, but they are usually already dead as a result of the change in pressure from their natural habitat. In 2007, a living frilled shark was discovered off the coast of Japan and transferred to Awashima Marine Park, but it died just a few hours later.[6]

Every so often, tombstones appear on Ocean Beach in San Francisco. Although that sounds spooky (and evokes images of underwater graveyards), there is a simple reason for the grave markers appearing. In the early 1900s, authorities closed most of San Francisco’s cemeteries in order to put up new buildings for the growing number of living residents. Bodies were relocated free of charge, but there was a cost for moving tombstones, so many of them were left behind and repurposed.

Some gravestones were broken down and used to line gutters, while others were used to shore up the seawall. As a result, pieces of tombstones that have broken off sometimes wash up on shore, and every so often, particularly strong winds uncover headstones. Some of the marble tombstones which dot the beach are almost completely and somewhat disconcertingly intact.[7]

As previously mentioned, carcasses of sea life washing up on beaches is fairly common. Less common is the fact that they occasionally explode. This happens because of a build-up of gas produced during the decomposition process. Of all creatures, whales explode in the most shocking and spectacular fashion due to their enormous size.

When a sperm whale washed up in the Faroe Islands in 2013, it was decided that an incision would be made in an attempt to release the gas in a controlled manner. However, it still caused a large blast, startling the person making the cut and sending whale guts shooting across the beach. An even more dramatic explosion occurred in 2004 in Taiwan. The 50-ton dead whale was loaded onto a trailer to be transported to a research center for study, but while en route, the pressure inside the carcass proved too much. It exploded, covering shops, cars, and pedestrians in stinking whale innards.[8]

Under very specific conditions, large snowballs, perfect for making snowmen, are naturally formed along the edges of bodies of water. BBC weather expert George Goodfellow explains that the snowballs begin as small pieces of ice that “grow when seawater freezes onto their surfaces,” and then the ball is made rounder and smoother when “jostled around by waves.” The snowballs are then left on the shore when the tide goes out. Usually, when these conditions are met, the ice spheres are only small, but occasionally huge balls are created.

In Siberia in 2016, spheres that reached up to nearly 1 meter (3 feet) across littered a 17.7-kilometer (11-mile) stretch of the Gulf of Ob’s coastline. This relatively rare natural phenomenon was also recorded in Finland in 2015 when snowballs ranging from the size of eggs to footballs were found on a beach on Hailuoto Island. Massive snowballs can also be formed in lake waters and have been documented on the shore of Lake Michigan.[9]

1 A Bag of Human Hands

Numerous shoe-clad, partially decomposed human feet have washed up on shore, particularly on the coasts of the Salish Sea, located between British Columbia and Washington. This happens because the soft ligaments of the ankle rot away before the rest of the body. Then the buoyancy of modern shoes carries the foot to the surface. Considerably less common is the appearance of hands. But in 2018, a bag containing 27 pairs of hands was found on Amur River Island in Siberia.

The Investigative Committee of the Russian Federation declared that the macabre bag of hands did not have a criminal backstory. They found that the hands had been “disposed of in a manner not provided for by law” by a forensics lab in the nearby city of Khabarovsk. However, why the hands were severed and then disposed of improperly by the lab is still unknown. Other medical materials, such as bandages and disposable hospital shoes, were discovered near the hands, but there is no further information on why so many hands were stuffed into a bag and then dumped in the river.[10]

10 Ancient Rituals That People May Not Know Much About

10 Eerie Ghost Cities Left Behind by the Soviet Union

Maybelle Blair, Who Helped Inspire 'A League Of Their Own,' Comes Out At 95