10 Weird Critters That Lived Alongside the Dinosaurs 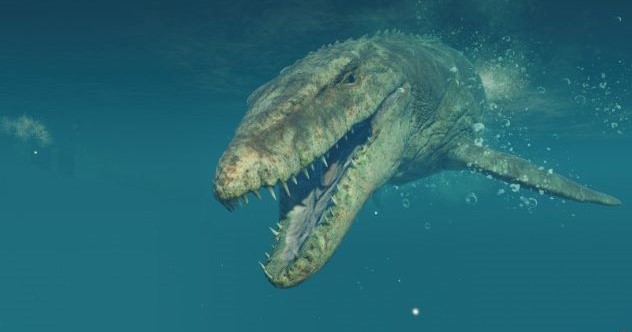 The reign of the dinosaurs on Earth was a lengthy one. For about 165 million years, they dominated every continent, and today they have conquered our imaginations. But they were far from the only animals on Earth. They shared their world with many species just as weird and wonderful as they were, a few you may not be aware of.

And with that, there will be no Archosaurs on this list. The term “Archosaur” refers to the clade in which dinosaurs belong, alongside their modern counterparts, birds and crocodilians. But they used to be even more diverse, including the likes of the flying pterosaurs and some ancient marine reptiles. Everything else is fair game.

Now, let us take a trip through time to look at some very weird critters!

Sinosaurosphargis yunguiensis lived in what is now southwestern China 243 million years ago. And it looks just like any turtle should, complete with the broadened ribcage. However, unlike many modern turtles, which are protected by very large hardened scales along their back, ancient turtle “shells” often consisted of a multitude of smaller osteoderms—scale-like bony deposits on the skin.

Except Sinosaurosphargis was notably not a turtle. It shared the turtle’s common ancestor, certainly. But it had split off from that lineage millions of years before the first “true” turtles began to appear.

Interestingly, those same bony coverings in this species threw a bit of a wrench into the ideas about turtle shell evolution, as it was something that the actual ancestral turtles notably lacked.[1]

Skittering about the arid ground of Late-Triassic France 200 million years ago, the tiny Megazostrodon could be mistaken for a weird rat or shrew. But this little critter holds a lot of significance for many paleontologists.

This little guy is considered a transitional form between the mammal-ish cynodonts and the true mammals, making it one of the most significant discoveries in the study of mammal evolution. Even so, where exactly it fits into the mammalian family tree remains somewhat controversial, as does the debate surrounding when exactly mammals truly became mammals.

Megazostrodon was probably much too busy eating bugs to consider its rather convoluted place in the world, however.[2]

Okay, okay, I know I’m technically cheating on this one. I’m not actually referring to the modern tuatara—Sphenodon punctatus—but rather the whole Order of Sphenodontia. Because I couldn’t bring myself to choose just one species.

The Sphenodontids were well established by the early Jurassic, just under 200 million years ago, and were once very a very diverse group. They were part of a larger group called the Rhynchocephalians, the sister group to the Squamates (modern lizards and snakes). They were essentially a diverse group of not-quite-lizards, very similar in design but distinct enough to be classed separately.

Unfortunately, though, all the Rhynchocephalians except for just one genus—Sphenodon—ultimately declined and went extinct millions of years ago. Only the tuatara remains, now threatened by human activity.[3]

The ichthyosaurs (literally “fish lizard”) were a very diverse group of marine reptiles that emerged some 250 million years ago.

For the purposes of this list, though, I am including the dolphin-like Stenopterygius, which lived roughly 180 million years ago. The reason for this choice is a particularly well-preserved specimen that shows just how weird these creatures were.

This specimen not only preserved traces of pigment in the skin but also a layer of blubber underneath. While not conclusively warm-blooded, the find is further evidence that these creatures did regulate their own body temperatures to some degree, an important trait for a reptile that regularly dove to the ocean’s depths.

At one point, the ichthyosaurs may have been some of the apex predators of the Mesozoic seas. But, ultimately, they went extinct around 90 million years ago, 25 million years before the non-avian dinosaurs did.[4]

Castorocauda lutrasimilis is one example of how nature tends to just use the same design motif over and over again. Much of its body was really quite similar to that of the modern beaver, from the flattened, scaly tail to its little webbed feet.

This was no primordial rodent, however. Instead, its narrow skull was fitted with many needle-sharp teeth well-suited for catching fish, not unlike modern otters. Interestingly, the fur of this 164-million-year-old critter is also remarkably similar to that of modern aquatic mammals, replete with guard hairs and a thick undercoat.

Unlike most modern mammals, Castorocauda likely laid eggs, leading some to suggest its lifestyle may have resembled that of the modern platypus.[5]

The origin of snakes and the loss of their limbs remains one of the most contentious debates within the paleontological community. So when a fossil of a Brazilian serpentine reptile somehow emerged in Germany under questionable circumstances (considering that it’s been illegal to export fossils from the country since 1942) and was examined, many were understandably ecstatic.

See, most primitive snakes known to science were generally already partially transitioned to limblessness, possessing no more than one set of limbs. This was different. So finally finding a four-limbed snake truly would have been earth-shattering.

But it was not to be. This was Tetrapodophis amplectus, which lived during the Early Cretaceous some 120 million years ago. And it really was just a very long lizard, not a snake at all.

That’s not to say that this critter added nothing to the debate, though. Tetrapodophis was a burrower, and the structure of its tiny limbs has often been compared to those of known primitive snakes. It is now thought that snakes ultimately lost their limbs to become more adept burrowers as this little lizard did.[6]

Yes, they get even weirder.

Modern monotremes descend from a very old lineage, though it’s not very clearly known how old. Estimates for the timing of the split from other modern mammal lineages vary anywhere from the Early Triassic to Jurassic periods. Still, the oldest-known platypus relative, Teinolophos trusleri, can be placed comfortably into the Early Cretaceous about 120 million years ago. After that, many other related species were quick to follow.

Unfortunately, most of these fossils are incomplete. Even so, it has been suggested that the traits that make the modern platypus so dang weird found their start here. Though only one species of platypus remains today, they were once a very diverse group whose reach even extended beyond Australia, as it did with the South American Monotrematum sudamericanum.

Also, one fun fact! Another very strange critter, the echidna, actually split off from a platypus relative anywhere from 20 to 50 million years ago (or even before that).[7]

Recently featured in BBC’s Prehistoric Planet, Kaikaifilu hervei was the king of the Late Cretaceous Antarctic seas 66 million years ago.
https://www.sciencedirect.com/science/article/abs/pii/S0195667116303123
Kaikaifilu was a mosasaur, a marine reptile most closely related to modern lizards and snakes. More specifically, Kaikaifilu was a kind of tylosaurine mosasaur, which meant it had a longer, more serpentine body than the comparatively bulky mosasaurine mosasaurs.

Its estimated length was an impressive 33 feet (10 meters) long, the largest from the South Pole, and it was likely the apex predator of the region. Its reign would not last long, however, as the mosasaurs all died out at the end of the Cretaceous.[8]

Adalatherium hui certainly had to have made a strong impression on its discoverers to be given its name. And I assure you, it did.

Using the words of lead researcher David Krause: “Knowing what we know about the skeletal anatomy of all living and extinct mammals, it is difficult to imagine that a mammal-like Adalatherium could have evolved; it bends and even breaks a lot of rules.”

This is all to say that this Madagascan critter from 66 million years ago was really, really weird.

And this seven-pound (3-kilogram) weirdo was probably still a baby![9]

Technically, one of the earliest primates (or perhaps one of the earliest direct predecessors), Purgatorius janisae, is known only from fossils dating to just after the Cretaceous extinction event. However, studies have suggested that the genus is likely much older, perhaps dating back to roughly 81 million years ago. So I feel no guilt.

Purgatorius, to put it lightly, looked like someone mixed up a ferret and a squirrel. But it also possessed the flexible ankle and wrist joints that would become a staple in later primates, allowing it to thrive in the treetops and far above most predators.

And things would only get crazier for primates from here.[10]

10 Bizarre Reasons Animals Made the News

10 Conspiracy Theories Based on Science

10 Predictions About a Typical Future Day in the Life

Joe Jonas Reveals He Uses Injectables: ‘We Can Be Open And Honest About It’