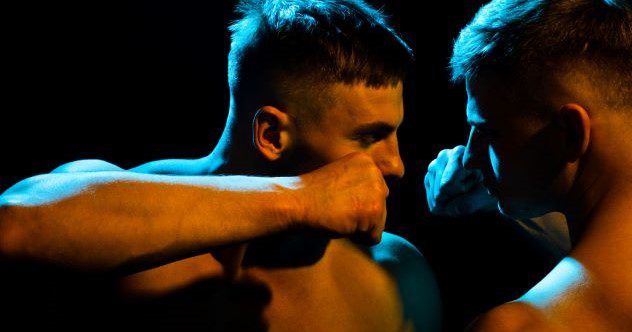 Movies bring people together, whether good or bad. One of the things I like about movies is that they can transport you anywhere. A great film can make you laugh or cry and even change your perspective. Many of the movies on this list may make you cry or laugh, but not for the right reasons. For many movie viewers, fight scenes are the most exciting parts of a film. But every fight scene is not created equal.

This movie is appropriately named. It is both rock and roll and a total nightmare. Rock ‘n’ Roll Nightmare is the project of Jon Mikl Thor, who is not only the starring man but also the main writer. The movie features Thor as the hero battling his enemies with huge ’80s metal hair. While it is mostly nonsensical, the movie comes to a head with a speech from the hero directly into the camera. It turns out he is talking to an alien puppet of some kind.

After the two talks, the weirdest battle ensues, complete with an epic rock ballad. The song, as you probably expected, was written and performed by Thor as well. The alien puppet is far more interesting than scary, as the face never moves. It really seems as though they filmed this scene with just one take. The acting, effects, and general premise are all just bad. Check it out yourself, and you’ll be sure to agree that this is one of the worst fight scenes in movie history.

The movie Pit Fighter holds the dubious distinction of being the newest movie to make this list. Made in 2005, Pit Fighter stars Dominique Vandenberg as Jack Severino. At the movie’s beginning, Severino has no memory of his life. The only thing he remembers is pit fighting. As the movie continues, he learns more about his past. Eventually, he has a major conflict when he remembers crucial information. This major conflict is one of the worst fight scenes I have ever seen in a movie.

It is certainly more of a gunfight than a fist fight, but that apparently did not make the choreography any easier. The scene is a nonstop battle, where the gunshots keep going for quite a while. Eventually, Severino runs out of bullets after killing dozens (maybe hundreds?) of enemies. No problem, though; he then just attacks henchmen with a sword. Finally, he is overcome by many men with guns. He smiles for some reason, then gets completely riddled with bullets.

Clearly, the movie didn’t have trouble finding extras, as the ground is covered with bodies multiple times. This may well be the least realistic movie scene I have ever viewed.

The next scene is the oldest on our list, from a movie made back in 1979. It is safe to say that a movie like this would never be made today because it is in such poor taste. The movie stars wrestler Ron Slinker as a mob enforcer. As you probably guessed from the title, Slinker plays a character with no legs. In reality, Slinker suffered from no notable disabilities (besides a possible lack of judgment).

Slinker’s character was the title character, Mr. No Legs, who did his mob enforcement from a wheelchair. Or the ground. Or in a pool. The fight scene featured shows Slinker dispatching an enemy first from his wheelchair. Then, he dismounts and kills an attacker using ninja stars hidden in the wheels of his chair. In general, the whole movie is an absurdity, but this scene, in particular, is clearly one of the worst fight scenes of all time.

Godfrey Ho, the director of Ninja: Silent Assassin, is known for his ninja films. He’s directed more than 120 movies over his career, but that doesn’t mean they’re all good. In this particular instance, the acting is incredibly bad, and the tone is unbelievable. The scene that made the list is the final battle from the movie. First, you may notice that none of the people seem like ninjas initially. Then, when they agree to meet to a fight “to the death,” all characters show up in cartoonish gear.

They trash talk and agree again that their battle will be “to the death,” and madness ensues. Complete with over-the-top drama, excessive cursing, wild outfits, and unnecessary and inappropriate sound effects, it is clear that this is one of the worst fight scenes on film. Also, the ninjas in this movie are far from silent. Perhaps Godfrey Ho ran out of logical names for his ninja movies.

Yes, you read that right. Not John Rambo, the character made famous by Sylvester Stallone, but rather Rambu. Incredibly, this movie is not a parody. Apparently, the “star” of Rambu was spotted at an airport in Jakarta and mistaken for the star of the Rambo and Rocky films. I guess a passing resemblance to a movie star was enough to inspire this Indonesian rip-off. The star of Rambu, Peter O’Brian, went on to have a career as an action star. This movie overall is a bit of a disaster, but the scene linked above epitomizes the absurdity.

This particular fight scene includes Rambu easily beating up multiple henchmen. The bad guys were apparently angry that a lady had gotten in the way. Rambu quickly comes to the poor woman’s aid and easily dispatches the thugs. After, he throws out a couple of cheesy lines and finishes by saying, “the name is Rambu.” This is only the intro to a quite bizarre movie, and it just devolves from there.

The 1980s were a crazy time in the film industry. Yet another ’80s movie that makes the list is They Live, a gloriously cheesy movie. The scene above starts innocently enough. Then, the two men begin exchanging punches. An amazing quote from the fight is when one character says, “I’m giving you a choice. Either put on the glasses or start eating that trash can.” The two exchange blows for several minutes, while both insist that they don’t want to fight.

The fight continues in this vein for too long and borders on being ridiculous. One man insists the other needs to wear the glasses, and he refuses. Eventually, he forces the glasses onto the other person’s face. Probably the best way to watch this scene is without glasses. Or maybe with your eyes totally covered.

Back in 1985, movie producers decided it was a worthwhile idea to cast Olympic gold medalist Kurt Thomas as the star of a movie. Thomas was known not only for his gymnastic abilities but also for his long, glorious mullet. He was certainly not known for being an accomplished actor. The movie Gymkata was based entirely on the Olympian.

The movie’s basic premise is that Thomas is a gymnastics ninja. Due to the absurd concept, this movie has several fight scenes that are truly awful. In the scene linked above, Kurt Thomas takes down several bad guys using all sorts of impractical techniques. At one point, it appears that he is landing from a backflip, and he knocks down multiple enemies. Worth a watch for its absurdity alone, this scene from Gymkata definitely deserves a spot on our list.

Another ’80s movie that tried and failed to turn a sports star into an action star is the movie Night of the Kickfighters. It stars a kickboxing champion, Andy Bauman. What is a kickfighter, you ask? It’s a kickboxer! I have no idea why they decided to go with this name.

The fight scene linked above is just one example of many in the movie. It shows a very slow-speed fight, almost like something you would expect to see on a stage. Then, the main character is thrown out the window. Complete with gratuitous sound effects and grunting, this scene shows us why there are no famous movies starring kickboxers (or kickfighters, for that matter). It’s slow, awkward, and generally hokey.

A list like this wouldn’t be complete without the king of cheesy action movies, Steven Segal. This movie, Exit Wounds, came out in 2001 and also featured another well-known actor, Anthony Anderson. He features in one of the worst fight scenes, which you can see above. The scene begins when Segal approaches Anderson in a club and immediately starts beating him up.

Anderson tries to fight back but is easily overmatched. Then, Anderson calls in his security force. And mayhem ensues. Who knew there would be so many chains and so much breakable glass in the club? The choreography is silly enough, but the club patrons do not even leave when there is a full-scale ninja fight. This is one of the most well-known and one of the most ludicrous fight scenes on our list.

The final fight scene on our list comes to us in another “masterpiece” by the director Godfrey Ho. This film, called Undefeatable, came out in 1993. If you spend a lot of time on YouTube, you may have seen this fight. It has gone viral and the video linked above (ironically called “Best fight scene of all time”) has more than 10 million views. The scene starts with a person licking a knife.

Both fighters repeatedly grunt before and during the fight, eventually taking off their shirts. When a lady in a sling appears and starts kicking, one of the characters is sent flying into the wall, face first. That wall had a knife sticking out of it, which impaled his eye. That is just the start because his other eye also gets impaled. Rough day. If you are looking for the ultimate in cheesy, excessive fight scenes that really make no sense, this scene is unforgettable.