Throughout history, societies have found many different ways to execute criminals, including beheading, hanging, a firing squad, an electric chair, a gas chamber, and lethal injection. Unfortunately, for all forms of executions, there will be some cases that don’t result in a timely death—some executions might not work at all, or some might take multiple tries or a long time to work.

Here we reveal ten executions that didn’t go according to plan.

Margaret Pole, the Countess of Salisbury, came from a royal lineage and was related to several kings. Unfortunately, she got caught up in the conflicts surrounding King Henry VIII’s break from the Roman Catholic Church and his attempts to divorce Catherine of Aragon and marry Anne Boleyn.

Pole’s son, Reginald, was made a cardinal in 1536 and started speaking out very vocally against Henry VIII. Shortly after, he fled to Rome and out of Henry’s reach. Unable to pursue Reginald Pole, Henry had Margaret Pole arrested in 1539 instead. She was imprisoned in the Tower of London, and her execution by beheading was scheduled for 1541 when she was 67 years old.

The executioner wasn’t very experienced, and the first blow of the ax missed her neck. Subsequent blows also did not land cleanly and instead hacked away at her neck, head, and back. It reportedly took 11 blows before Pole was finally beheaded, a rather gruesome way to go. In 1886, Pole was beatified by Pope Leo XIII and became Blessed Margaret Pole under the Roman Catholic Church.[1] 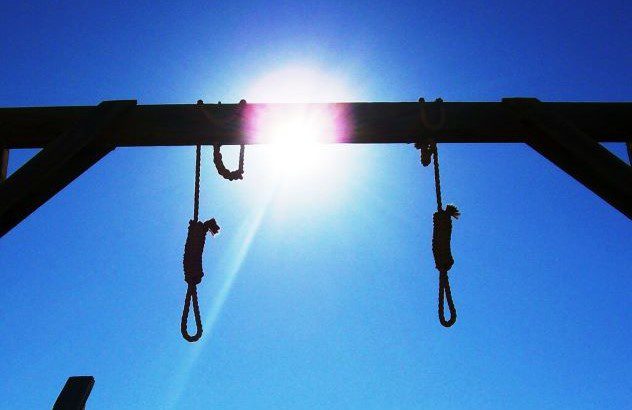 In 1801, Joseph Samuel was transported from England to the Australian penal colony for theft. Two years later, Samuel and a gang of thieves decided to rob a house. During the course of their robbery, a constable showed up and was killed. Samuel and several others in the gang were eventually caught. Samuel confessed to the robbery but not the killing. However, he was still sentenced to death by hanging.

On the date of his execution, Samuel continued to claim his innocence. Samuel was transported to Parramatta with another man, both scheduled to be hung. With a noose around his neck, the cart was moved from beneath the gallows. However, the noose around Samuel’s neck broke, and he fell to the ground. A second noose was brought, but this one unraveled. A third noose was used, but this one broke as well. The ropes were inspected, and no signs of tampering were found. The governor decided to release Samuel after this, citing divine intervention.

Samuel still didn’t learn his lesson. He was caught again a few years later, committing another crime, and sentenced to jail. Shortly afterward, he and eight other inmates escaped and stole a boat. They were never seen again and presumed to have drowned.[2]

John Lee was another “man they could not hang.” In 1884, Lee was convicted of murdering Emma Anne Whitehead Keyse, a resident of the small village of Babbacombe in England. Although the evidence against Lee was weak and circumstantial, he was sentenced to die by hanging at Exeter Prison in 1885.

Prior to his execution, the executioner at Exeter Prison tested the trap door underneath the gallows several times to make sure that it worked. Yet when they went to execute Lee, the trap door that Lee was supposed to drop through got stuck and would not open. They tried a second time and a third time but bit with the same result. The trap door just would not open. Lee’s execution was postponed and eventually commuted to a life sentence in prison. After serving 22 years of his life sentence, he was released from prison.[3]

In 1978, Ginggaew Lorsoungnern worked as a domestic helper for a family in Bangkok, Thailand. She kidnapped their 6-year-old son and gave him to a criminal gang, who held him for ransom. The ransom payment didn’t go as planned, and the gang ended up killing the boy. He was wounded with a knife and buried alive.

Lorsoungnern and the gang were caught and sentenced to die by firing squad. On the execution day, Lorsoungnern was tied to a cross, and the executioner shot ten bullets into her body. When the medical examiner couldn’t find a sign of life, she was taken to the morgue, where she started making sounds and tried to sit up. She was rolled over to help her bleed out faster while a second accomplice was brought for his execution. When the execution team discovered later that she was still alive, they tied her up again and shot her with 15 more bullets, which finally killed her.

A similar issue occurred with the third person to be executed in the plot. The first 13 bullets didn’t kill him, so they had to shoot him 10 more times.[4]

In 1976, while he was on parole for killing his girlfriend, Jimmy Lee Gray kidnapped, raped, and murdered a three-year-old girl. He was sentenced to die in the gas chamber in Mississippi in 1983.

On his execution day, Lee was strapped to the chair in the gas chamber. Cyanide pellets were released and dropped into the sulfuric acid solution underneath the chair, which released the poisonous gas. Gray was said to have taken a deep breath, then started gagging and banging his head against the steel pole behind his chair. Although the doctors on hand have stated that his heart stopped beating after two minutes, witnesses say he was moaning and banging his head for the whole eight minutes that they were allowed to watch. They were quickly escorted out of the viewing area after eight minutes.

Shortly after Lee’s execution, Mississippi installed a headrest on the execution chair. A few months later, they switched to lethal injection for executions.[5]

In 1978, Frank Joseph Coppola, a former policeman, was convicted of beating a woman to death while robbing her home in Newport News. He was sentenced to death in Virginia. Although maintaining his innocence, Coppola requested his execution by the electric chair during the summer of 1982. At that time, he dropped all further appeals to further spare his family more grief
.
In theory, during execution by electric chair, two jolts of electricity are sent through the condemned prisoner’s body—the first is supposed to cause unconsciousness and the second to cause death. In Coppola’s case, the first jolt did not make him unconscious; witnesses could see and hear him writhing in pain. During the second jolt, which lasted nearly a minute, witnesses could hear the sound of and smell flesh sizzling. Both Coppola’s head and leg caught on fire. There was so much smoke in the chamber that the witnesses say they could barely see Coppola at all.[61]

Jesse Tafero was convicted of fatally shooting two police officers during a routine traffic stop in Florida in 1976. He was sentenced to die in 1990 by electric chair even though he claimed he was innocent.

Before Tafero’s execution, the sponge used in the electric chair’s headpiece had to be replaced. Instead of replacing it with another natural sponge, which could handle the electric current without starting a fire, officials used a synthetic sponge. When the first jolt of electricity was delivered, the headpiece caught on fire. Witnesses said they saw flames nearly a foot high shooting up from Tafero’s head. It would take seven minutes and two more jolts before Tafero was declared dead. Inmates at the prison claimed to have smelled his burning flesh for days after the execution.

The saddest part of the Tafero story occurred after his death—it turns out he was innocent as he had maintained all along. An accomplice in the car with Tafero eventually confessed to the shooting.[7]

In 1994, Brian Steckel talked his way into Sandra Lee Long’s apartment. He then raped and strangled her and set her bedroom on fire, killing her. Steckel was convicted and sentenced to death by lethal injection in 1997. While in prison, Steckel sent taunting letters to Long’s mother. The execution was carried out in 2005 in Delaware.

During his execution, officials noticed the anesthetic that Steckel had been injected with started leaking into the tissue surrounding the needle in his arm, but they didn’t fix the problem. He was then injected with a paralytic drug and a very painful heart-stopping drug. There was also a blockage in the line, which was eventually cleared, though again with no anesthesia. The process took so long that Steckel wondered out loud why it was taking such a long time. Prison officials have denied that there was any problem with the execution and claimed that they had simply wanted to give Steckel more time to say his goodbyes.[8]

In 1989, Joseph Wood shot and killed his ex-girlfriend and her father. He was sentenced to die by lethal injection in Arizona in 2014.

Wood was strapped to a gurney, and the execution began normally. Officials didn’t have any problems inserting the needle or with the injection itself. However, due to issues with obtaining certain drugs for use in executions, Arizona was using an experimental two-drug combination that it had never used before. The same drug combination had been used in a recent Ohio execution, where the condemned took nearly 30 minutes to die. Nonetheless, Arizona officials expected the execution to take mere minutes. Instead, it ended up taking much longer.

Witnesses to the execution say they started seeing Woods gasping for air and making noises a few minutes into the execution. It would eventually take nearly two hours, 15 injections, and several hundred gasps before Woods finally died, making it one of the longest executions in U.S. history.[9]

Romell Broom was convicted of abducting, raping, and killing a 14-year-old girl in 1984 and sentenced to die.

In September 2009, Broom was supposed to be executed via lethal injection. The execution team tried 18 times to insert the needles necessary to inject the lethal combination of drugs but failed. They tried to find useable veins in both Broom’s arms and legs and, at one point, struck his bone instead. Broom even tried to assist the team several times by turning over onto his side and moving his arms up and down while flexing his fingers. Finally, they were able to insert the needle, but his vein collapsed as soon as they tried to inject saline. After two hours, the state finally halted the execution attempt.

10 Ancient Rituals That People May Not Know Much About