In bygone days, before modern technology, people had to rely more on their imaginations to come up with entertaining pastimes. This often resulted in some very strange games, especially for children, during the Victorian Age and long before. Some of these games are silly, while others are a little disturbing, and versions of some are still played today.

Here are 10 of the weirdest children’s games from the Victorian era and earlier.

Some children’s pastimes during this era were startlingly macabre, such as one make-believe game known as Funeral. As strange and disturbing as it may seem today, laying out a doll and performing a mock funeral, sometimes even burying the doll, was common in the 19th century and referred to by authors of the day.

One publication noted that Charles Dickens referenced such a game in his 1840 novel The Old Curiosity Shop. In the story, the protagonist, Nell, stumbles across a group of children in a graveyard “playing funeral” with a very realistic doll—their baby brother or sister.

Considering the high infant and child mortality rate in this era, it makes sense that end-of-life rituals would be reflected in children’s play. Not only did kids gather together pretending to mourn a loved one, but there were toys made for this purpose, including a tiny black coffin and a tiny black mourning dress.[1] 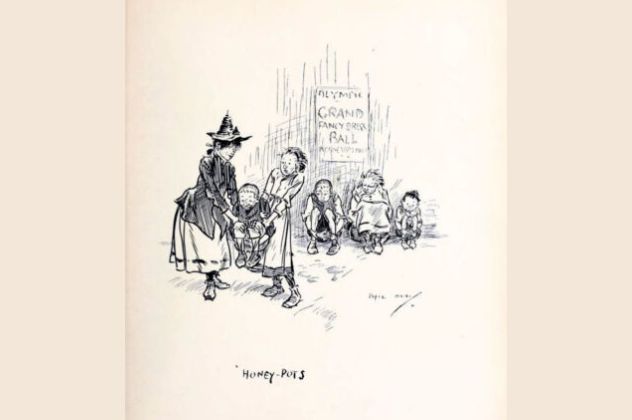 There isn’t much to the 19th-century game Honey-Pots, but that doesn’t mean it was easy. One player rolls their body into a very tight ball, and another player has to lift the person and carry them as if they were a jar of honey being brought home from the market. Depending on the size of the player who’s impersonating the honey-pot and the one doing the lifting, this could be a challenging task. It was probably also uncomfortable being transported in this strange manner.[2]

The Victorians liked games involving fire, like Ghostly Fire and the very popular Snap Dragon. Some of these were clearly hazardous, such as the Halloween game Apple and Candle, in which a stick was strung up horizontally with an apple attached to one end and a lit candle attached to the other. Participants would take their turn jumping up and using their teeth to try to snatch the apple from the quickly twirling stick.

However, as The Book of Days explains, “it very frequently happens that the candle comes round before they are aware, and scorches them in the face, or anoints them with grease.”[3]

The ancient game of Knucklebones is suspected of having originated in either ancient Egypt or Lydia and eventually made its way into Roman and Greek culture. The children’s version of the game involves simultaneously throwing five game pieces up in the air. As they fall, a player tries to catch as many as possible on the back of their hand. In another version, players try to throw one or two pieces at a time into a small hole in the ground or the opening of some small object.

The strangest thing about this pastime is that the actual knucklebones of goats and sheep were originally used as game pieces. Later, they were made of all sorts of different materials, including glass, wood, stone, and even bronze and gold. Games similar to Knucklebones are still played today, such as the children’s game, Jackstones.[4]

One famous Victorian party game for children and adults, Hot Cockles, is possibly the most bizarre and violent, which may be why the memory of it has not been lost to history—except for maybe on an episode of Jackass.

A player kneels down, blindfolded, and places their head in the lap of a seated person, then waits for the other guests to take turns kicking them from behind. The objective is for the player to “guess who has just kicked them.” In another version of the game, the blindfolded player would guess the identity of the person who has just slapped them.[5]

5 Ring Around the Rosie

Everyone’s familiar with the cute childhood game Ring Around the Rosie, which is still popular today. This activity started long before the Victorian era and involves kids holding hands as they dance around in a circle, singing the words to this old nursery rhyme. However, the lyrics may be rooted in a tragic chapter of history. There is a widespread belief that the words describe symptoms of the bubonic plague.

The first line, “Ring around the Rosie,” could easily refer to the bright red rash visible on infected people. The line “Pocket full of posies” could be included because the flower was considered a good luck charm that was thought to guard against the contraction of the virus. Posies were also “sometimes used to overpower the stench of dead bodies.”

The line “Atischoo, atischoo,” is meant to sound like sneezes, so that also fits in with the theory. But children in some places instead say “Ashes, ashes,” which could be a reference to the frequent cremations that were done during the plague. Sadly, the phrase “We all fall down” might symbolize death, as the plague, of course, had a very high fatality rate.[6]

There are many variations on the 2,000-year-old game we know today as Blind Man’s Bluff, in which a player is blindfolded and spun around before chasing after other players who are calling out to them. One version known as The Bellman is a reverse of the standard game. All the players are blindfolded except one, who rings a bell. When the blindfolded players hear the bell, they run in the direction the sound came from, trying to catch the person who rang it.

This is one of many games played in the Victorian Era and earlier that could be somewhat dangerous. As History Collection points out: “It’s very likely that the blindfolded kids collided into one another, and possibly ended up getting a concussion.” [7]

It’s hard to imagine being so bored that it would seem like fun to try to blow a ball of wool off the opposite side of a table, but maybe that’s because we’re not in the Victorian Age. Yes, this was a game. The challenging part was trying to get the ball of wool past the person on the other side, who was supposed to block it from going over the edge. In another version, a player would use their breath to keep a feather in the air for as long as possible.

Imagine trying to entertain children with this game at your next family gathering.[8]

During the Victorian era, there were a number of games that revolved around girls trying to glean information about their future husbands. These were especially popular during Halloween parties. One such game involved the pouring of melted lead through a key into a bowl of water and analyzing the shapes for hints of their future husband’s occupation.

In another game, a girl was supposed to eat an apple by candlelight while looking into a mirror and hopefully see the reflection of her intended standing behind her.

Three Luggies called for a girl to be blindfolded, so common in this era, and have three turns at placing her left hand in one of three bowls to determine what kind of husband she would get, but it only counted if her hand was in the same bowl at least twice. If she dipped her hand in a bowl of water, she was destined to wed a bachelor. A bowl of milk meant she would marry a widower, but if the bowl was empty, it meant spinsterhood, a frightening prospect in the 1800s. No wonder they played it on Halloween.

There was also a version of this game for males, but the bowl that meant the young man would marry a widow contained fowl water instead of milk.[9]

A marriage-themed game might sound goofy today, but since Victorians, in general, seemed to be so preoccupied with who was going to marry whom, it makes sense that there would be a party game based on the topic. These games tended to be geared toward teenagers and young adults. Marriages and Divorces almost sounds like the predecessor to speed dating and has been compared to it. However, the old-fashioned parlor game may have actually been a more effective matchmaking technique. In Marriages and Divorces, all the girls would line up on one side of the room while the boys would line up on the other side. Whoever you happened to be standing across from was your partner. Each player had to write a “character sketch,” including their flaws and their good points.

As if this game wasn’t awkward and embarrassing enough, each participant was required to read these descriptions aloud in front of the group. Depending on how well a couple hit it off, they would either ask the game’s judge to be “married” or “divorced.” However, it was up to the judge to decide if they were compatible enough. In the event that a couple asked to be divorced, despite the judge’s opinion that they were suitable, there was a penalty. The two players had to pay a forfeit.

In a different version of the game, just called Marriages, everyone would name a famous person, alive or dead, or a fictional character. The male participants, assuming the role of one of these celebrities, would propose to a female player, who would either accept or reject the proposal. However, if she declined, she was obligated to explain why. After everyone was matched up, the males had to explain why their character proposed to the female player. This game could be a way to explore romantic attitudes in mixed company but with a less personal and direct approach than Marriages and Divorces.[10]