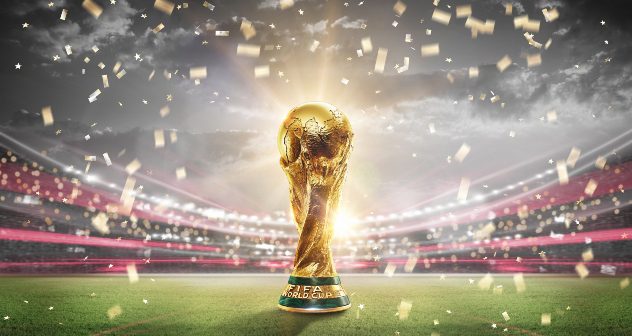 Because the tournament only takes place every four years, this makes the stakes even higher than an annual tournament. And, because every country in the world has an opportunity (even if it is a long shot) to qualify, it is the biggest field of teams in any tournament. Of the many countries competing in the World Cup, only eight teams have won. They are Italy, Brazil, England, France, Spain, Argentina, Uruguay, and Germany.

Since so few teams have won this illustrious competition, you may think there is a lack of parity or that a few teams always dominate. In reality, this is far from the truth. Just about every World Cup features multiple upsets. Because scoring is so low in soccer, a single goal (and a single moment) can be all it takes for a David to upset a Goliath.

Related: Top 10 Weirdest Things to Have Happened in Football

Germany is a true powerhouse when it comes to world soccer. They have been a dominant force against teams worldwide and have won four World Cups (1954, 1974, 1990, and 2014). The Germans enjoyed another successful World Cup as defending champions and were heavy favorites against Bulgaria in the 1994 quarterfinals.

Most casual fans assumed they would steamroll the Bulgarian squad. Indeed, Germany had most of the chances and a lot of possession throughout the early parts of the game. Early in the second half, Lothar Matthaus converted a penalty kick to give the Germans the lead. Many people assumed the match was over. The Bulgarians had other ideas.

With only 15 minutes remaining, Hristo Stoichov equalized with an incredible free kick. Just three minutes later, the Bulgarians took an improbable lead through a goal by Yordan Letchkov in the 78th minute. These two consecutive goals remained the most important in Bulgarian World Cup history and eliminated the German’s chance to be repeat champions.

Spain’s 2010 World Cup team was known for a passing style where they could control the game’s possession. With possession, the opposing team would need to chase the Spaniards around, getting fatigued and frustrated. This style was extremely effective, and the 2010 Spanish national team is considered one of the best teams in recent history, with significant global stars such as Andres Iniesta, Xavi Hernandez, and David Villa.

In 2010, their first match at the World Cup in South Africa was against underdogs Switzerland. Switzerland scored early on through midfielder Gelson Fernandes. The Swiss were able to hold on to the lead and went on to win the game. Spain got the last laugh in the tournament, however, as they were able to regather their concentration and went on to win the entire cup, the nation’s first and only World Cup victory.

Soccer was invented in England back in 1863. It is a point of national pride for the nation. Despite this, the first World Cup they participated in was only in 1950! Still, going into the tournament, the English were seen as favorites. England won their first group game against Chile, then faced an American squad made up entirely of semi-professionals.

The American team showed grit and determination, netting a goal late in the first half thanks to a header from Joseph Gaetjens. England continued to push in the attack but was unable to score. The American team held on doggedly with the support of the Brazilian fans. Because soccer was not a popular sport in the United States at the time, only one American journalist traveled to the World Cup. This is the most famous victory in United States men’s soccer history and is the only World Cup match in which they have beaten England.

England lost their final group-stage match against Spain and was eliminated from the tournament.

Italy is a soccer force, having won four World Cup championships. North Korea… not so much. Their team was surprised to have even qualified for the 1966 World Cup in England. (They have only qualified for one World Cup since). The Koreans lost their first game to the Soviet Union. In their second game, they performed better and managed a draw against favored Chile.

For their third match, they were pitted against an Italian team widely considered more talented. North Korea played with tenacity, organization, and teamwork. They held the Italians scoreless for the entire ninety minutes and managed to win thanks to a goal from Pak Doo-ik. This eliminated the Italian team in the most notable victory in North Korean soccer history.

Going into the 2002 World Cup, the French team was riding high. They had won the 1998 World Cup and the 2000 Euro Cup, so they went into the 2002 tournament with very high expectations.

Senegal must not have gotten the message. They worked hard and, through diligent effort, got into an effective cross. Bouba Diop, the Senegalese striker, had his first shot saved by the goalie, but on his second attempt, his team took the lead. Diop unveiled an iconic celebration, taking off his shirt next to the corner flag and dancing with his teammates.

Senegal has had other famous victories, but this is the first that showed what they could do on the world stage. On the other hand, France did not make it out of the group stage. In fact, they could not even score a goal in any of their three games (Denmark, Uruguay, Senegal). Senegal continues to produce top-class players and has greatly improved their soccer reputation, in many ways, on the back of this famous win.

Cuba is the only team on this list that didn’t actually qualify. Instead, Mexico withdrew from the 1938 World Cup, and Cuba took their place. As you might expect, they were considered serious underdogs compared to the Romanian team.

In their only World Cup appearance, the Cubans went on to a victory against Romania. Unfortunately, the Cinderella story ended, and Cuba lost 8-0 to Sweden in the quarterfinals.

The next match on our list is a truly unique one that took place in the 1974 World Cup in West Germany. It was so unique because it had political ramifications. Following World War II, Germany was divided into East and West Germany. The Western portion was controlled by democratic nations, while Communist Russia controlled the Eastern part of Germany.

As the hosts, West Germany was considered the serious favorite. However, the East Germans surprised the world and went on to victory, with a goal in the 77th minute from Jurgen Sparwasser and a stalwart defense to hold the West German team scoreless. The West Germans had the last laugh, though, as they went on to win the tournament with a 2-1 victory over the Netherlands.

Argentina won the 1986 World Cup, and many people considered them among the best teams in the world. They were led by one of the most famous soccer players, Diego Maradona. Maradona was well known and celebrated in Italy (the host nation) for his club career.

Cameroon was not intimidated, and they came ready to play aggressively. Their aggression paid off in the 67th minute when Francois Omam-Biyik scored. The Cameroonians continued to work hard to maintain their lead, even picking up two red cards in the process.

Cameroon showed excellent team spirit despite being down to only nine men by the end of the game. It held on, eventually going on to become the first African team in World Cup history to reach the quarterfinals of a tournament. Argentina was eventually eliminated by South American rivals Brazil in the round of 16. An African team beating the defending World Cup champion would be amazing by today’s standards, but in 1990, it was truly unbelievable.

It is safe to assume that Germany is the favorite in almost every World Cup competition. They are a consistently organized team with elite athletes. This was definitely the case in the 1982 World Cup in Spain.

Algeria, alternatively, was making their World Cup debut. They certainly made it count with two second-half goals to hold the West Germans at bay. They scored in the 54th minute and just seconds after a German equalizer in the 68th. While this was certainly a memorable and iconic victory by the Algerians, you must give the West German side credit. They recovered from the loss and reached the World Cup final, only to lose to a strong Italian side.

The last game on our list is also the most recent, taking place at the 2022 World Cup in Qatar. Argentina was coming off of a victory in Copa America. Argentina’s team was ripe with talent, including Lionel Messi, widely considered the best player of all time, but certainly in the modern game.

As you would probably expect, Argentina came into the game as the big favorite. Saudi Arabia had other ideas, however. Argentina scored early through a penalty kick by Messi. Saudi Arabia continued to work hard and scored two goals quickly from Saleh Alshehri and Salem Aldawsari. Despite the best efforts of the Argentinian squad, Saudi Arabia held on to achieve a famous victory.

However, things did end up evening out in the tournament. Argentina eventually went on to win not only their group but the entire tournament. On the other hand, Saudi Arabia went from a moment of glory to being eliminated in the group stage.