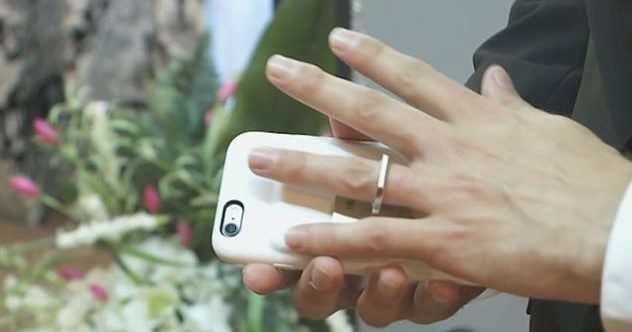 Most of us are quite happy to assume that people are people, cats are cats, and rocks are rocks. There is a clear difference between us, animals, and inanimate objects. But for some, the distinction is not so clear-cut.

Objectophilia—a romantic or sexual attraction to objects—covers many attitudes. At one extreme are people who believe that objects have will, intelligence, and feelings. Conversely, people accept that an object is just an object but love it anyway.

Some people might let love lead to its natural conclusion and marry the object they care for. In some cases, this might be an expression of true love. In many cases, the reason is simply publicity. We’ll look at both kinds here. Some people and institutions will officiate at a wedding between a person and the object of their desire. But these marriages are not legally recognized anywhere. But let’s get to it. Here are the top ten everyday objects people have married.

When the artist and director, Aaron Chervenak, got married in the Little Vegas Chapel, he certainly looked the part. Formally dressed, he was every inch the elegant groom. His bride-to-be, however, was definitely going for a more minimalist look.

As the ceremony reached its climax, the officiant asked:

“Do you, Aaron, take this smartphone to be your lawfully wedded wife, and do you also promise to love her, honor her, comfort and keep her, and be faithful to her?”

He did, and the two tied the knot. That the ceremony was not, and could never be, lawful didn’t seem to worry Aaron. Neither did the fact that most people don’t remain faithful to their smartphones for very long. Soon, their eyes wander, and they decide to upgrade, leaving the old phone languishing in a drawer.

Aaron’s point emphasized how important phones have become and how many of us can’t imagine life without them. The publicity didn’t do any harm either.

9 The Case for Rain Gordon

It’s not unusual to meet a partner in a local store, and Rain Gordon was in a hardware store when she met Gideon. This was in 2015; Rain was 24 and from Moscow, Russia. The relationship with Gideon went well, and five years after their first meeting, the two got married.

This is their story… Rain had been shopping for a prop for a photo shoot when she found the love of her life. Gideon was the prop—because Gideon is a briefcase.

Rain had always believed that objects have souls and, when very young, developed a crush on a new shopping center. She kept quiet about that affair but saw no reason why she shouldn’t be open about her love for Gideon. She is adamant that her relationships with real men have never been as satisfying as her relationship with her briefcase.

If you’re like me, you find it difficult to get up in the morning, and you might be tempted to prolong your relationship with your duvet. In Britain, February can be a miserable month, and many would like to spend it in bed rather than in the office. Pascale went one step further.

In a ceremony in Exeter, Pascale “married” her duvet. Anyone could attend as long as they wore bedroom clothes, and 120 guests turned up. Pascale, resplendent in slippers and pajamas, beamed happily as she tied the knot. Her long-term partner, Johnny, kept his thoughts to himself.

Pascale was happy to admit that her “marriage” was a gimmick, but she had a serious purpose. She wanted to draw attention to the problem of loneliness in modern society and chose a date just before Valentine’s Day to get maximum attention. She got it.

Ned Nefer met his wife’s head in 1986 and provided her with a body over the next few years. According to Ned, she instructed him on how to do it, and she has always been the driving force behind the relationship.

When Ned had finished assembling his wife Teagan, they married at a private ceremony in California. Ned, speaking for both of them, said:

“We weren’t legally married. But on the ocean, we took our vows; we said words to each other, and we’ve done our best to live by them.”

Teagan appreciates the open air, and Ned indulged her by taking her for a walk around rural New York in 2011. Teagan was in a wheelchair. Local police talked to him but refused to arrest him because he seemed harmless and happy.

6 No Barrier to Love

“Something there is that doesn’t love a wall…”

Something perhaps, but someone does or did. “Did” because this is a tragic tale of loss. When Germany was divided into two countries, the democratic West and the communist East, Berlin sat in East Germany but was itself a divided city. To stop citizens from escaping from the communist sector into the democratic sectors, the East German authorities constructed a wall in 1961.

The Berlin Wall was a symbol of division, but for Eija-Riitta Berliner-Mauer, a Swedish woman in her mid-twenties, the Wall was an object of passion. Eija had fallen for the Wall when she was just seven years old, in the year that the Wall first saw the light of day. In 1979, as the Wall turned 18, she married it.

In the eighties, as the couple settled into married life, pressures were building that eventually saw the destruction of the Soviet system. An unwitting victim was the Wall; the authorities tore it down in 1989.

The young widow turned her attention to railroad tracks, bridges, and fences, but nothing could replace the Wall. Eija died in 2015, no doubt still heartbroken.

Noorul Mahjabeen Hassan prefers that people call her Fractal Database. She was a math student at the University of Florida when she decided to marry her Tetris game. Fractal was no wide-eyed innocent when she fell head over heels for her Tetris.

Fractal had a string of relationships behind her. One of the most serious had been with Pierre, a calculator she saw and ran her fingers over daily. But even with Pierre in her pocket, Fractal felt attracted to others. She is also very keen on IKEA, iPods, GPS systems, and Google Cloud. (I’m not sure that Google Cloud should count as it’s not an object).

One can only hope that Tetris is not the jealous type.

Tim didn’t get around much and didn’t meet many people. Anyone who wanted to see him had to go to him—he wasn’t going anywhere. Tim lacked experience in the modern world, but you couldn’t describe him as naive or innocent because Tim was a poplar tree.

But, one day in 2015, Tim did meet somebody. Thirty-one-year-old Emma McCabe came across him and fell in love. Emma had had several bad relationships with men and decided she much preferred Tim, the tree’s company.

McCabe was to describe their amorous relationship as the best sex she ever had and that she loved the feeling of skin-to-bark contact. Tim didn’t give his opinion.

The United States Air Force dismissed Erika Eiffel because she had a personality disorder. One indication of this was that while attending the Air Force Academy, she fell in love with an F-15 fighter jet.

A talented archer, Eiffel credited her success in her sport to the relationship that she had with her favorite bow. It’s fitting that Cupid had her in his sights when she first saw the Eiffel Tower in 2004. She fell in love and married the tower in 2007. The tower is over 130 years old, but the difference in their ages doesn’t seem to have hindered their partnership. Speaking for both of them, Erika says that they reciprocate each other’s feelings.

Ms. Eiffel is the founder of Objectum Sexuality International, an organization that brings together people who are fond of objects.

When she was seven, Maria Yoon moved to the United States with her family from her native South Korea. Her family seems to have held traditional values because, when she was still unmarried at thirty, her father suggested that it was about time that she found a husband.

Maria is a performance artist and decided that she could turn matrimony into a work of art.

Over nine years, Maria married in all the states, Puerto Rico, the District of Columbia, and the United States Virgin Islands. She married 36 men and two women and made up the numbers by marrying a few objects, including an entire ghost town, a lobster trap, and the Liberty Bell. Her movie about her adventures has received critical acclaim.

Apparently, she aimed to raise questions about the institution of marriage. I imagine that her dad wishes that he’d never said anything.

1 All the Fun of the Fair

When Amy Wolfe added her partner’s surname Weber to her own, it showed her deep commitment to her marriage. Weber was the roller coaster manufacturer that Amy had fallen in love with.

She didn’t take the relationship lightly; she first fell in love with 1001 Nacht when she was 13 but still had to ride it 3000 times before she was sure she was doing the right thing. That the roller coaster was in Pennsylvania and she was in New York was no obstacle to the romance.

Amy’s previous affairs with model spaceships, the Twin Towers, and a banister didn’t cause her or her fairground ride any difficulties either.

Because Amy’s beau is static, she carries around some spare nuts and bolts from him to always keep him close.