Everyone loves heist movies. The action is fast-paced, the actors are beautiful, and the payout is big. However, the reality is not as glamorous as in a film. Security around valuables is pretty tight. Plus, actual robbers are rarely smart enough to pull off a big-time heist. When everything goes wrong, the results can be both disastrous and hilarious.
Here, we present you with the top 10 heists that failed spectacularly.

In 2004, four friends embarked on a mission to rob their college’ s library of rare books. It would be the ultimate heist. Their plan had all the necessary elements—fake identities, elaborate disguises, and tons of potential for a payout. The four spent months plotting. They even contacted an auction house, where they planned to exchange the books for cash.

On the night of the attack, the friends arranged a “viewing “to access the collection. Once inside, they tied up a librarian and began to loot. They walked away with over $2 million worth of goods. This included an original work by Charles Darwin. But it didn’t last long. Their disguises were awful, and they accidentally called the librarian by her private nickname. All four were finally arrested when the auction house became suspicious. Ultimately, each man was sentenced to seven years in prison.[1]

9 The Pretoria Heist That Made a Hero

It was just another day at work for Leo Prinsloo. As a trainer for armored vehicle drivers, he was accustomed to escorting valuable cargo. But when robbers attacked his truck in transit, he knew he had to act quickly. In a heroic turn of events, Prinsloo and his partner Lloyd Mtombeni fought back. They remained calm, cool, and collected during the terrifying event. We can see it all on dashcam footage that went viral as the two foiled a heist.

Machine gunfire rained down on the deserted stretch of highway. The would-be thieves were hoping to overtake the truck, but Prinsloo charged them instead of fleeing. He drove at them, causing them to scatter. After a harrowing chase, the robbers fled. They achieved nothing except destroying their own vehicles. The kicker? It was only trainee Mtombeni’s fourth day on the job. It’s probably safe to say that a promotion is in his future.[2]

8 The Bungled Burglary of Balaji’s Temple 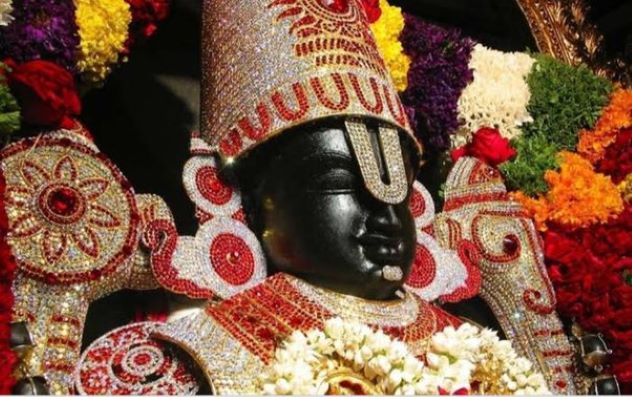 It’s never a good idea to steal. That goes double if you rob a temple. A group of unidentified thieves did just that in May of 2022. The group broke into the 300-year-old temple of Lord Balaji in Uttar Pradesh, India. Their goal was to steal a collection of rare and precious idols. Unfortunately for them, the plan was successful. At least, it was partly successful. The thieves ended up returning most of the idols just six days after the robbery.

The temple’s priest found the treasures abandoned outside of his residence. So, what happened? A note found with the idols stated that the thieves had been plagued with terrible nightmares since their heist. Unable to function from paranoia and insomnia, they decided to give back what they had stolen and beg for forgiveness. The police did not oblige. As of now, efforts are ongoing to catch the criminals.[3] 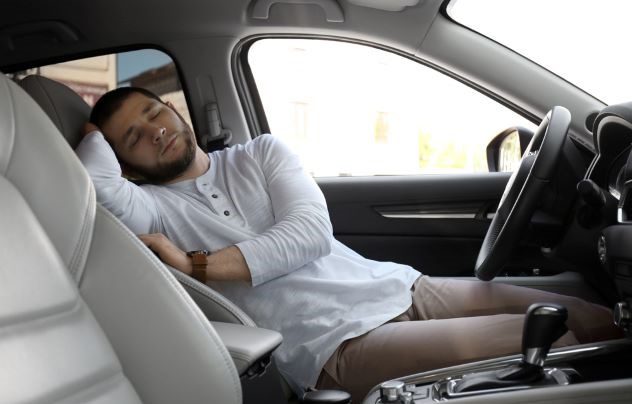 Florida is famous for terrible criminals. Oscar Montoya, Juan Hernandez, and Ricard Barrios are perfect examples. In 2010, the trio hatched a heist that would net them millions—or so they thought. Montoya and Hernandez broke into a South Beach bank on a Sunday, planning to steal every cent they could. Unfortunately, the bank is closed on Sunday. All the money was locked inside the vault.

Instead of giving up, the pair took all the small change they found. Weighed down by heavy coins, they had trouble making their getaway. When they finally got to the car, they found Barrios drunk and sleeping at the wheel. It took the police no time at all to catch them. It turns out Barrios had no idea he was the getaway driver in a robbery. He was charged only with resisting arrest, but he likely learned a hard lesson about staying cognizant while out with friends.[4]

Everyone knows Salvador Dali. But not many people know that in 1965, he painted a picture for the inmates at Rikers Island in New York. The painting was displayed and stored at the prison for nearly four decades. In 2003, four prison employees decided to steal it. Lifting a Dali painting is a bold move, but stealing it from inside a prison? That’s downright arrogant.

It was also downright stupid. The group replaced the original work with a very poor imitation, and the switcheroo was noticed immediately. It only took a few days for the group to turn on each other. After a series of confessions and wiretaps, everyone was caught. Only the ringleader received any jail time, though. Unfortunately, the Dali painting was never recovered. The men claim it was destroyed.[5]

David Ghantt was just another disgruntled Loomis employee. In 1997, he got fed up with working long hours for a measly rate. He handled millions in cash every day. Didn’t he deserve a piece of the pie? Ghantt began to complain vocally. His coworker Kelly Campbell began to listen. Eventually, the two teamed up with a few other people and hatched plans for a heist. Ghantt stole $17 million from the Loomis vault at work. He then took the security tapes and sped off in his getaway van.

Ghantt made his way to Mexico, where he hid for several months. Unfortunately, he forgot to take one of the tapes. Police saw everything, and Ghantt became a wanted man. Meanwhile, his co-conspirators began to spend their portion of the money extravagantly. They bought expensive cars, mansions, and fancy clothes. Police soon caught on. In the end, 24 people were charged in connection with the heist. All the money was recovered except for a mystery $2 million that continues to evade capture.[6] 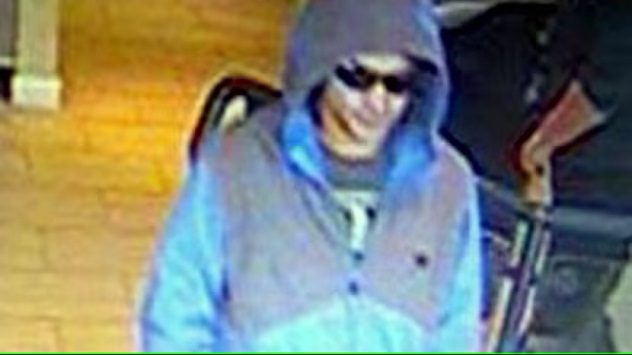 Dean Smith is not the sharpest tool in the shed. When he went to his local bank back in 2014, Smith only wanted to change his address. But when he saw all that cash, he got an idea. The plan? He would rob Barclays for some much-needed funds. All he had to do was wear a disguise. There’s no way anyone would recognize him.

Unfortunately, Smith did a poor job disguising himself. He threw on some sunglasses, put socks over his shoes, and called it a day. The bank teller he robbed was the same woman who had served him just half an hour beforehand. She knew who he was immediately. It was an easy arrest for the police, who already had his name and new address on file.[7]

3 The Washington ATM Heist that Never Was 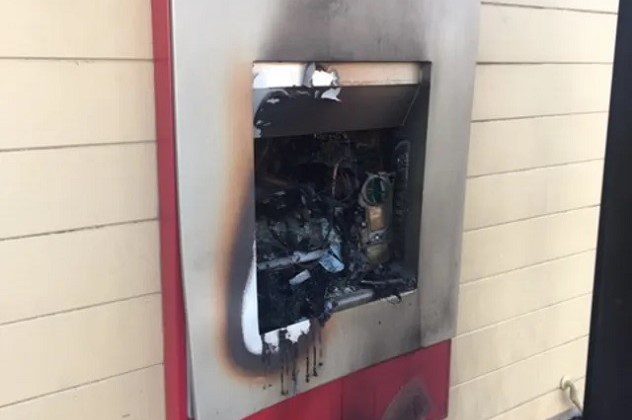 Bank ATMs are notoriously hard to break into. Most people don’t even try, but Jason Kovar did. He and an accomplice attacked an ATM outside a local Everett, WA, bank back in 2016. They brought a blowtorch and other tools to get inside the machine. Unfortunately, the plan backfired when the ATM caught on fire.

Soon, smoke and fire alarms started blaring. Eventually, the cash started burning as well. In an attempt to put out the fire, one of the men urinated on the smoking bills. This didn’t help, as the fire was too big. The pair ran away with nothing, and the bank put up a $5,000 reward for their capture. As of now, they have not been sentenced.[8]

Robbery is cold-blooded. It’s even colder when you dress up as Rick James. Back in 2015, three men did just that. The trio disguised themselves in similar 1970s-era fashion, complete with long braids and sunglasses. They pulled off a total of three heists against check-cashing facilities and several credit unions.

The men managed to get caught on their fourth attempt. They stole a vehicle and ended up in a high-speed chase. The trio was eventually apprehended and charged with robbery and conspiracy to commit robbery. Two were sentenced to 24 years, while one received a lighter sentence of just six. It’s a surprise no charges were brought against them for fashion-related offenses.[9]

1 An Inside Job at the Van Gogh Museum

The Van Gogh Museum in Amsterdam is a place of wonder for art lovers. But in 1991, twenty paintings were almost lost forever. In an elaborate plot that took hours to execute, four men robbed the museum and stole the Van Goghs. One waited in a bathroom stall for hours, while others threatened guards at gunpoint. Police later admitted they suspected one of the guards was involved and the robbery could have been a high-reaching conspiracy.

But the plan was thwarted. Once the robbers loaded the Van Goghs into the getaway car, they planned to make a vehicle switch like all good thieves do. Unfortunately, the switch car had a flat tire. Instead of improvising, the thieves abandoned ship—leaving hundreds of millions of dollars behind them. Eventually, all four men were arrested. The Van Goghs were returned to their rightful place in the museum. You can still see most of them displayed today.[10]