Top 10 Weird Mascots You Might Not Have Heard About 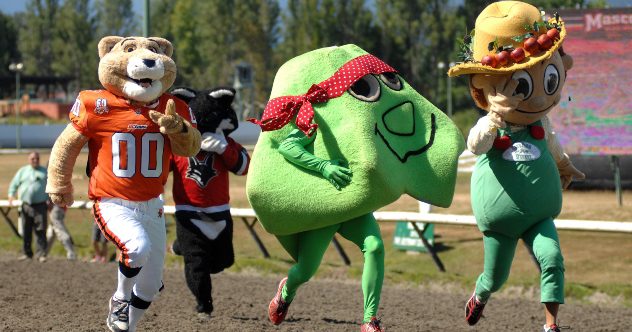 Mascots have been around for quite a while; one of the first mascots was a taxidermy mount in 1908 for the Chicago Cubs. However, it wasn’t until 1964 that live costumed mascots began to appear. It wasn’t long after that costumed mascots became an expected part of many sports teams, universities, companies, organizations, and schools.

Most mascots make sense and go with an associated name. However, other mascots are totally out there. Some of the mascots are loveable despite their bizarre design. Others make you scratch your head and wonder what the designers were thinking. Here are ten weird mascots you likely haven’t heard about.

Technically, the Stanford Tree is the mascot of the band. But the Tree actually symbolizes the city of Palo Alto, which has a Redwood tree as its logo. As it happens, Stanford University also has a tree on its official seal, proving just how inseparable the university and Palo Alto really are.

The school never had an official mascot due to no one agreeing on any one candidate. Around 1975, the band performed several halftime shows that slyly introduced mascots they thought would work for the school. The Stanford Tree received such a positive reaction that the band decided to keep it around.

Now, the Stanford Tree has become part of many other university traditions. One tradition is known as Full Moon on the Quad. This tradition started back in the 19th century. Men in the senior class would kiss women in the freshman class and sometimes exchange roses. Today, the tradition boils down to kissing as many people as possible. In that one night, the Stanford Tree may receive at least 1,000 kisses.

In 1985, Xavier University already had a mascot, D’Artagnan, the musketeer. However, Sally Watson, the spirit squad coordinator, worried that the sword-carrying character scared kids. So Sally decided to design a softer, more loveable mascot.

Since his introduction, the Blue Blob has been part of sporting events and even appeared in two SportsCenter commercials. But unfortunately, the Blue Blob doesn’t have much of an origin story which caused many students to come up with their own version.

So today, the question remains, what is the Blue Blob? But that is the thing; he is just a blob. He is blue, furry, and an energetic character that even adults love. The mascot also has a two-foot-long tongue that he uses to lick fans. The Blue Blob even has its own merchandise.

Anyone can wear the Blue Blob costume, but the candidate must meet one requirement. The Blue Blob cannot be taller than D’Artagnan. Beyond that, anything goes.

In 1904, football manager R.J. Kirk needed a name for the Wichita State University team (formerly Fairmount College). R.J. settled on the Wheatshockers. This came about because many football players earned tuition and board harvesting—otherwise known as “shocking”—wheat.

Later, the name was shortened to Shockers. Until 1948, the university used a simple shock of wheat as its symbol. In 1948, junior Wilbur Elsea won the Kappa Pi honorary society’s competition to design a mascot representing the school’s spirit.

However, it wasn’t until 1954 that the mascot received a 3-D representation, with a costumed being created by a WU cheerleader and members of the art department.

In Japan, one of the weirdest mascots is the Mysterious Fish. The mascot was introduced in May 2017 by the Chiba Lotte Marines baseball team. The mascot begins as an angler fish with legs. However, the Fish reveals new forms throughout the game, including a skeleton fish.

Mysterious Fish has worked with Hawaiian Airlines since 2018. However, in 2021 the person playing the character announced his retirement. Unfortunately, this also meant the Fish would retire instead of having someone new fill his fins.

Delta State University has always had two mascots. The official mascot has been the Statesman due to the role State Rep. Walter Sillers, Jr. played in the school’s location. However, in the 1980s, a series of events led to the student body adopting an unofficial mascot.

The students never felt a Statesman was very intimidating. One day some university basketball players and baseball players were talking in the “Court of Governors” dormitory. Basketball player Houston Williamson expressed how the Fighting Statesmen wasn’t frightening to opponents. It also didn’t help that the mascot was temporarily prohibited from athletic activities due to a physical altercation with another mascot.

Everyone in the group agreed with Williamson and said a mascot needed to be mean and green. A lively discussion ensued, and the players made many suggestions. Baseball pitcher Bob Black suggested okra because the fruit is green, fuzzy, and tough. But it wasn’t until the mid-1990s that the Fighting Okra was adopted as the unofficial mascot.

Y’all Star the Water Tower, the mascot of the Florence Y’alls, hosted his first game on May 13, 2016. The inspiration for this mascot came from the famous water tower in Florence, Kentucky.

The baseball team was initially called the Florence Freedom. In 2020, the group changed its name to Florence Y’Alls to honor the water tower.

In 2019, Wigan Athletic, a member of the professional association football club (or soccer, depending on your preference), ran a Primary Schools competition to develop a mascot. The team didn’t have a mascot and decided the time was ripe to have one.

Wigan Athletic ran the competition to give the team a mascot and get the creative juices flowing for local children. In addition, the competition would teach the children to take the initiative. Most of the entries were some sort of pie design because apparently everyone in Wigan loves pies.

The winners were local children Cayden and Neve, who presented Crusty the Pie. The children were given the honor of introducing the mascot alongside former England international Peter Reid.

Kingsley, the monobrowed mascot, was designed by David Shrigley for the Scottish football team Patrick Thistle. The problem is that no one seems to like the character or know what he is supposed to be. The poor mascot has gone so far as to be branded the mascot nobody loves.

The character looks like a sun with one eyebrow and buck teeth. Despite looking totally strange, Kingsley has become part of the team. Fans and out-of-towners want a piece of him. Jay McGhee, the man within the costume, finds the head quite helpful in storing his water bottle, phone, and keys.

The name Youppi means “Yippee” in French. Youppi represents the Montreal Canadiens (formerly known as the Montreal Expos). The mascot is a furry, orange character with an exclamation mark as his jersey number. Youppi entered the sports arena in 1979 and continued to be part of the team until 2004.

Youppi also happens to be the first mascot to be thrown out of a Major League Baseball game. On August 23, during the 1989 season, the mascot took a running leap and landed hard and noisily on the visitor’s dugout in the 11th inning. Youppi then snuck into a front-row seat. Later, the mascot was allowed back into the game but was confined to the team’s dugout roof.

In 2005, Youppi switched from baseball to the world of hockey. By December 2019, the loveable orange character was voted into the Mascot Hall of Fame. Youppi is the first Canadian mascot to receive this honor.

Phillie Phanatic didn’t have the usual introduction most new mascots receive. Instead of making a big announcement, the poor creature from the Galapagos Islands just came onto the field. The spectators saw the giant, green, furry creature and laughed at his antics.

Even though Phanatic’s debut wasn’t made into a big deal, it was still a success. The Phanatic’s inception began with former Phillies owner and Vice President Bill Giles deciding that his team needed a mascot like the San Diego Chicken so more families would come to the games.

Bill Giles originally asked Jim Henson, the creator of the Muppets, to design the new mascot. However, Henson declined and passed the opportunity on to Bonnie Erickson, who created Miss Piggy, Waldorf, and Statler.

David Raymond was the first person to fill the costume. Unfortunately, his first night as the Phanatic didn’t go quite as planned. Raymond fell over a railing accidentally, and the fans laughed. Raymond quickly adopted falling and slapstick humor into his act.

In 1994, Tom Burgoyne took over Phanatic duties. Burgoyne easily took up the Phanatic’s personality and built on it. Burgoyne began to ride around on an ATV, mock the opposition, and shoot hot dogs from a hot dog cannon.

Papa John's Launched A Weird New 'Craving,' And Pizza Lovers Aren't Having It