Top 10 Weirdest Things People Have Found in Their Food

Treats can be a nice surprise, but you never want a surprise in your treat. From razor blades to nails, from mice to maggots, you’ll be shocked (and probably disgusted) at the top ten weirdest things that people have found in their food. Be warned you may not want to be snacking as you read through this list; let’s hope your stomach is stronger than ours. 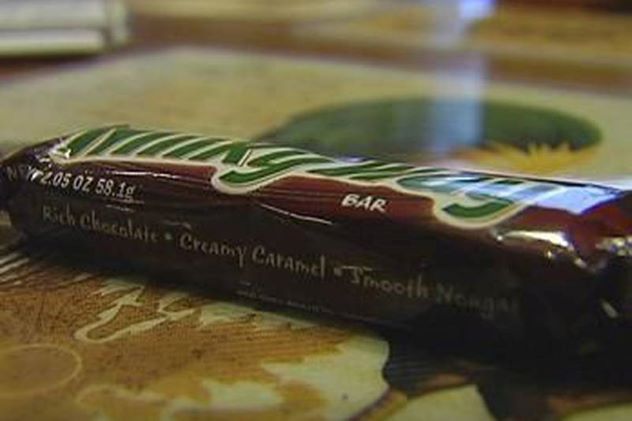 Sue Calhoun and her husband took a road trip to Dallas, Texas, to pick up a new tractor in 2010. Like a lot of us, Sue enjoys a snack on the road. Her snack of choice? A Coke and a Milky Way candy bar. She and her husband stopped at a gas station, and she got her candy bar and soda. However, she got way more than she paid for. Calhoun enjoyed her first bite of the Milky Way with no problem. But on the second bite, she thought she had bitten into a peanut.

No such luck. Instead, Calhoun found a complete human tooth. It even had a filling. Luckily, Calhoun didn’t suffer any damage to her own teeth. After contacting Mars Chocolate North America (the manufacturers of the candy bar), she was sent a letter of apology and offered coupons for free candy bars, according to KLTV. I’m not sure I’d be craving Milky Way candy bars anymore if I were her. Maybe more than one person lost their sweet tooth in this scenario.

9 Black Widow Found in a Bag of Grapes

In September 2015, in the Troy, Michigan, area near Detroit, a citizen purchased grapes from a Wal-Mart Supercenter as part of her normal shopping routine. She was in for an unfortunate surprise. When rinsing the grapes, the woman discovered a spiderweb. Upon further inspection, she discovered a spider. As if that weren’t bad enough, the spider was actually a black widow. The black widow is considered the most venomous spider in North America. After killing the dangerous spider, the woman contacted the police and Wal-Mart. Wal-Mart investigated to determine the source and ensure this didn’t happen again.

Unbelievably, the same thing happened in Boston to Jorge Fuertes and his son. Fuerte purchased his grapes from Whole Foods and claimed there were at least two in the bag, according to UPI.com. Thankfully, again, no one was hurt. Just goes to show how rinsing your produce can actually save your life.

8 Frogs in Frozen Vegetables (and Other Places Too!)

Frogs have been found in frozen vegetables multiple times. But one instance, in particular, is cause for concern. In 2010, Tim Hoffman found a frog in a bag of frozen vegetables at the Meijer grocery store. After contacting the store, they issued a recall and removed the products from their stores. Another instance was in 2009 when Chastity Erbaugh was preparing lunch for her children. One thing on the menu was green beans purchased from Wal-Mart. Fortunately, she added butter to mix in, revealing part of a frog. Luckily, these green beans were not eaten.

Frogs seem to have a way of making their way into packaging. In another instance, a frog (or maybe a toad? Does it matter?) was discovered inside a can of Diet Pepsi in Florida. Frogs have also been reportedly found in other foods including in a box of penne pasta and a bag of fresh greens leading to health concerns as some frogs can be poisonous. Sadly, disgustingly, frogs aren’t the only “springy” thing that’s been found in food.

When it comes to fast food, it’s fair to say that most of us don’t know what is going into our food. There is certainly an expectation that it’s edible. However, in 2015, in San Marcos, California, a woman got something in her Taco Bell order that was not on the menu. When getting dinner for her family, she ordered herself a quesadilla and was shocked to find a metal spring in her food

About the size of a Q-Tip, this metal spring was most likely from a pen one of the workers may have been using to mark orders. Thankfully, she didn’t swallow the spring or suffer any injuries to her mouth. According to her, it got her reconsidering fast food in general and Taco Bell’s management and dietary choices. 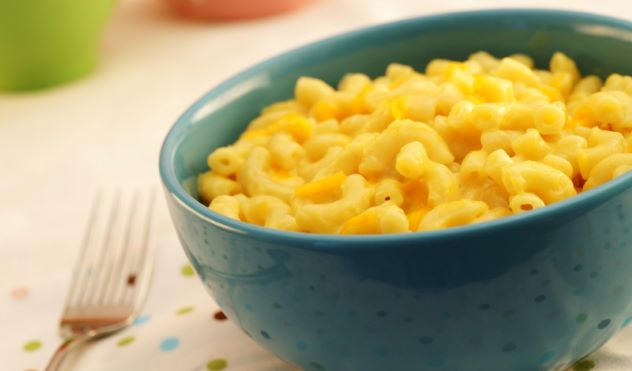 One of the most dangerous items on our list came from the biggest supermarket chain in England, Tesco. In 2008, Rebecca Shorten was ready to eat a quick meal at home. She pulled a frozen macaroni and cheese dish from Tesco out of the freezer and heated it up.

Without looking closely, she began to dig in. She bit into something hard and, unfortunately, swallowed it. Then, she inspected her food more closely and made a shocking discovery. In her frozen macaroni meal, there were two one-inch nails. Like, metal, hang a picture frame on the wall, nails Horrifically, she swallowed a third

Tesco’s response to the incident was to remove the product from shelves immediately. Of course, this did little for Shorten. Shorten went to the hospital that night. Medical professionals conducted an X-ray and confirmed that she had swallowed a nail and it was currently in her intestines. She was discharged from the hospital but forced to return the next day in incredible pain.

According to The Daily Mail, Shorten stayed in the Lincoln County Hospital emergency assessment unit until the nail passed through her digestive system. She recovered under extensive medical care and has since sworn off mac and cheese, making this a tragedy indeed. 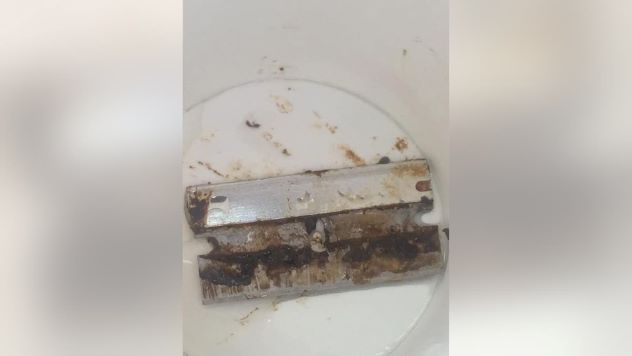 In 2016, Aubrey Simonds in Keene, New Hampshire, got Wendy’s for herself and her family. However, they got more than they bargained for. Simonds posted pictures on her Facebook account of something disturbing found at the bottom of her daughter’s drink cup: A used razor blade. Keene’s health director investigated the complaint, and while it’s somewhat inconclusive, it seems as though an employee was using the razor blade to clean the restaurant.

The employee disposed of the dirty razor blade in a cup, worrying that a loose razor blade in the trash may present danger. Instead, the cup was used by another employee and ended up in the hands of Aubrey Simonds and eventually her daughter. The restaurant apologized and took full responsibility. Thankfully this one didn’t end up in their system.

4Mouse in Mountain Dew Can

In 2009, a man found a dead mouse inside a can of Mountain Dew. Ronald Ball, the former enjoyer of Mountain Dew, filed a lawsuit against PepsiCo, in which he asked for $75,000 in damages. However, PepsiCo fought this claim, at least initially. In court, PepsiCo brought forth a scientific witness who indicated that a mouse would have liquified in the soda entirely, becoming like a jelly.

Of course, this doesn’t actually make PepsiCo products look better in the public eye and rather has the opposite effect. Eventually, the lawsuit was settled out of court for an unreported amount, but we’ll never be able to look at canned sodas the same way again. Mice, like frogs, seem to find their way into a lot of food.

In the Wilmington area of North Carolina, Clarence Stowers was enjoying a nice chocolate custard. He found something hard and, at first, assumed it was a nut. After digging around, he realized it was actually a severed finger.

Stowers quickly contacted the store to learn that an employee had tragically lost part of his finger in the mixing equipment. After this, another employee mistakenly scooped the digit into a pint of chocolate custard, eventually ending up with Stowers. Stowers reportedly did not return the severed finger to its owner, as it could not be reattached, and instead opted to keep it for his legal case.

This story may remind you of another where a woman claimed to find a severed finger in her Wendy’s chili. While that claim was eventually found to be a hoax and that the woman planted the finger there herself, we can’t think of any reason good enough to concoct such a scheme.

2Maggots and Larvae in a Mandarin Orange

Hassan Ali from West Yorkshire, England, purchased a bag of oranges from Sainsbury’s. He and his coworkers ate three Mandarin oranges straight from the bag. Later in the day, he returned for another tasty treat and broke the Mandarin orange in half.

According to the Mirror, he smelled it first. He said it “Smelt like really strong rotting food.” Then, he looked closely and discovered “some kind of maggot or larvae and millions of little eggs.” Ali stated that he believed the insect to be dead and promptly removed the rotting fruit. That is sure not our idea of a healthy snack.

Nothing like tasty, creamy clam chowder, right? In 2003, at a McCormick & Schmick’s restaurant in Irvine, California, Laila Sultan had a major problem with her soup. First, the soup was served to her cold. She asked for it to be reheated. The soup was taken back, and a fresh bowl was returned to her. As she ate, she discovered a condom in the chowder.

Sultan sued the restaurant, claiming anxiety and depression stemming from the incident. McCormick & Schmick’s eventually settled with her outside of court for an undisclosed amount. Bizarrely, this is not the only reported case of a condom being found in food. Claims have been made that condoms have been found in McDonald’s Big Macs and fries.