The ocean floor is littered with shipwrecks, many of which hide a secret. But as wonderful as mysteries are, not knowing the answer is like a persistent itch that cannot be scratched. Luckily, in the last few years, several ships have given up their silence and revealed remarkable stories. From a strange blip near the RMS Titanic to massive warships vanishing into thin air, here are the top maritime mysteries that can now be explained.

In 1682, the HMS Gloucester almost killed a king. James Stuart, the future King of England, was onboard the vessel when it wrecked on a sandbank off the English coast. On that fateful day, James barely survived, but hundreds of crew and passengers did not. Despite the tragedy and almost altering royal history, the location of the ship remained unknown.

Then two brothers, Lincoln and Julian Barnwell, along with their friend James Little, decided to look for the Gloucester. After four years of searching, they began to believe that they would never find the wreck. But in 2012, the divers found a cannon off the coast of Norfolk. This led to a shipwreck, and eventually, the ship’s bell positively identified the vessel as the long-missing HMS Gloucester.

Remarkably, when the trio randomly decided to find the missing royal ship, they had no idea how historically important their discovery would turn out to be. Considering its age and role in royal politics, historians now view the discovery of the Gloucester as one of the most significant maritime discoveries in recent years.[1]

9 The Real Age of an Old Ship

In the 1980s, a fisherman was working the Java Sea when he discovered a shipwreck off the coast of Indonesia. The vessel was old—that much was clear. But no one could date the ship. The only thing researchers knew was that it came from China and carried a cargo of ceramics, ivory, and incense.

In 2018, archaeologists combed through the cargo again and discovered something they’d previously missed. One of the ceramic pieces had Chinese writing on the bottom, and it was almost like a label akin to the modern “Made in China” stamps. In this case, it revealed the location where it was produced: Jianning Fu in China’s Fujian province.

Historical records showed that Jianning Fu became Jianning Lu around 1278. This suggested that the ship sank before this name change, perhaps as early as 1162. This, together with carbon dating tests of the ivory and other items, showed that the ship was probably 800 years old, a century older than previously thought. [2]

During the Second World War, the U.S. Navy forbid relatives from serving on the same ship. The purpose of this rule was to spare families from losing multiple members in the case of a disaster. But five brothers had other ideas. The Sullivan siblings flatly refused to serve in the war unless they were assigned to the same ship. For some reason, the Navy gave in and allowed all five brothers to board the warship USS Juneau.

On November 13, 1942, the USS Juneau was fighting in the Battle of Guadalcanal when she was struck by a Japanese torpedo. The ship sank, killing everyone on board, including Francis, George, Joseph, Albert, and Madison Sullivan.

For 76 years, the location of the ship remained a mystery. But in 2018, sonar pulses alerted a research crew of an anomaly that turned out to be the long-lost warship. It was found near the Solomon Islands in the South Pacific Ocean. The shipwreck rests at a depth of 3,700 feet (4,200 meters) below the surface and can only be described as a crumbling ruin covered in sea life.[3]

Paul Henry Nargeolet was a diver who frequented the shipwreck of the Titanic. By the time he had 30 dives under his belt, he’d discovered something strange. One day, in 1998, a mysterious blip appeared on his sonar screen, which sparked a mystery that would last for decades. Nobody knew what it was, only that the blip was big and close to the Titanic.

In 2022, Nargeolet and other researchers launched an expedition to the shipwreck and managed to solve the puzzle. The blip wasn’t another wreck or an underwater mountain. It was a deep sea reef. Tentatively called the Nargeolet-Fanning Ridge, the volcanic formation sat 9,514 feet (2,900 meters) below the surface and teemed with marine life like fish, corals, lobsters, and sponges.[4]

In maritime history, Ernest Shackleton was a legend. He went down in the history books when his ship, the Endurance, sank off Antarctica in 1915. Shackleton and his crew made an incredible escape—not just off the ship—but by surviving for over a year on drifting ice floes. Everyone was eventually rescued, but the Endurance was never seen again.

In 2022, explorers set out to find the infamous wreck. They discovered the Endurance in the Weddell Sea, a region also tellingly called the world’s “worst sea,” a name it earned for being so dangerous and difficult to navigate. The shipwreck rested 4 miles (6 kilometers from where it had been originally crushed by pack ice. Despite all the crushing, the team discovered that the Endurance was mostly intact and remarkably preserved.[5]

In 2012, efforts were made to widen the Ijssel River in the Netherlands. While working, a shipwreck was discovered at the bottom of the river. It wasn’t alone. The cog, a type of medieval wooden ship, was in the company of a punt and barge from the same era.

But why was this fleet resting in that particular spot? As it turns out, the 2012 project wasn’t the first attempt to engineer the Ijssel River. Researchers now believe that the vessels were deliberately sunk 600 years ago to alter the flow of the water.

The decision was made to lift the cog from the water and preserve the boat. This was no easy feat, considering that the vessel weighed 55 tons (50 tonnes). Maritime archaeologists spent three years planning the recovery, and when the moment came, they successfully raised the cog in its entirety during the first attempt.[6] 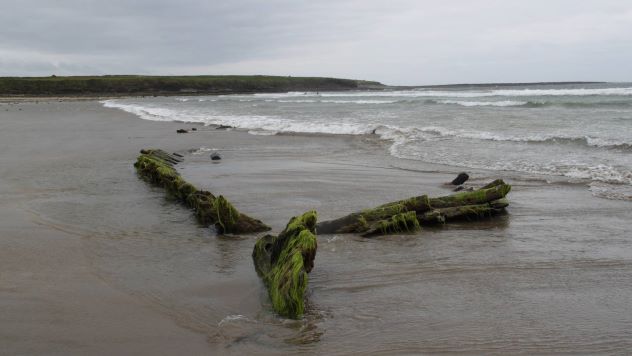 For decades, locals living near Ireland’s Streedagh Beach visited the remains of a shipwreck. Lodged in the sand, nobody knew where it came from or the name it sailed under, and it eventually became known as the “Butter Boat.” In 2020, researchers decided to crack the mystery. What they pieced together was a remarkably detailed and tragic tale.

After testing the ship and sleuthing through historical records, they discovered the ship’s real name was the Greyhound. It was a trading ship that frequented the coastline between Ireland and Britain. In 1770, the vessel sailed from Yorkshire’s Whitby Port and ran into a storm at Broadhaven Bay.

The crew successfully abandoned the ship, but after a head count, they realized that a cabin boy was still trapped on the ship, which was anchored near some cliffs. The crew and local volunteers returned to the Greyhound, but the storm dragged the ship and many of the rescuers out to sea, killing 20 people in the process.[7]

3 The Shipping Container That Wasn’t

In 2019, a storm jostled the ship the MSC Zoe. As a result, several steel containers fell overboard. Sometime later, metal salvagers decided to retrieve the containers and sell them as scrap. Armed with a mechanical arm for grabbing large items and a ship-borne sonar, the crew arrived in the North Sea, where the accident had happened. While scanning the seafloor near a Dutch island called Terschelling, they found a sonar anomaly.

Not sure what it was but hoping for a shipping container, the salvagers used the mechanical arm to grab the object. What rose to the surface was not payday—but a piece of history. They’d brought up timbers belonging to a 500-year-old ship and five tons (4,700 kilograms) of its cargo of copper.

The cargo was earmarked to be used for some of the Netherlands’ earliest copper coins, while the ship itself was a rare example of two ship-building methods. Dutch shipbuilders transitioned from a medieval method called “clinker” to the more advanced “carvel” technique, both of which were present in the wreck built during this pivotal change.[8]

When a warship sinks and lives are lost, the wreck is considered a war grave and military property. Needless to say, a lot of ships went down during World War II, many of them taking entire crews with them to the bottom of the ocean.

In 2016, Naval researchers were visiting several sites when sonar revealed a disturbing pattern. Various submarines and warships had vanished without a trace. Considering the massive size of these sunken vessels, the whole thing was confusing—at first. A sudden influx of ship-related materials at scrapyards soon revealed an answer. As it turns out, metal pirates are targeting warships. It’s not hard to see why. A single bronze ship propeller is worth about $5,000, and a complete wreck has enough metal to earn you a million dollars.

American warships are not the only casualties of this trade. Metal pirates also plunder Australian, Dutch, British, and Japanese warships, sometimes at significant personal risk to their own safety. [9]

1 How Horses Proved a Legend

Not all shipwreck mysteries are underwater. Some roam the land as living, breathing creatures. In this case, it’s a herd of wild horses. For centuries, the animals have existed on the island of Assateague, near the coast of Virginia and Maryland. But how did they get there? Nobody really knew, only that an old folk tale claimed that long ago, the first horses were marooned on the island after they survived a doomed Spanish galleon.

Proof of this legend appeared by accident. During a recent study, a researcher tested the DNA from what he thought was a cow’s tooth. The latter had been found at a centuries-old abandoned Spanish colony in the Caribbean. However, analysis soon showed that the tooth belonged to a 16th-century horse.

Curious about the animal’s origins, the DNA was compared to modern horses. From the onset, the expectation was that the horse’s closest living relatives would hail from the Iberian Peninsula, where the Spanish got their horses from. However, the tooth’s DNA was more closely linked to the mysterious herd of Assateague. This proved that the Assateague horses could only have originated from Spanish colonies and that their ancestors were indeed the steeds of explorers who had wrecked near the island.[10]